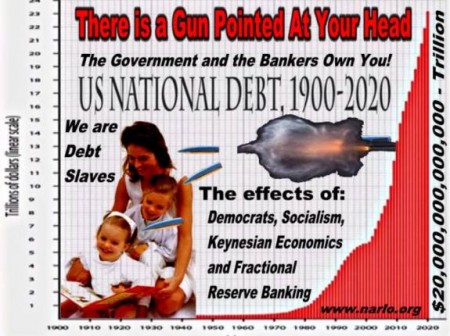 (Feb. 21, 2016) — “All of the problems we’re facing with debt are manmade problems. We created them. It’s called fantasy economics. Fantasy economics only works in a fantasy world. It doesn’t work in reality.” — Michele Bachmann

We ask you to take a good hard look at the image that accompanies this article.  The image depicts the explosive rise in the national debt, the reasons what caused it to rise so precipitously in such a short period of time and the extreme danger it poses to every American citizen, as shown by a bullet on its way to your wives’ and children’s head.  This isn’t just a fantasy, or some TV story.  This is reality in the form of an imminent and grave danger to every American that the representatives of the people have chosen to ignore, or kick down the road for the last three decades.  Your politicians have known of the problem for at least that long and have done nothing, except make it worse.

It took over 206 years for the national debt to reach $1 Trillion.  It took just another 22 years to increase it $18 Trillion more.  The Office of Management and Budget (OMB) predicts the national debt will increase to $33 Trillion in just 10 more years.  Every man, woman, child and the unborn are on the hook for that $33 Trillion and rising debt.  It is totally unsustainable and it is why we predicted in a recent article that: “America’s Collapse is a Self-Fulfilling Prophecy.”  And that is what the powerful men of politics and banking have done to the men, women and children of America, and the world.

Let’s see if we can explain it to you with a little kitchen-table economics.

A family of four, husband, wife and two kids, earns $100,000 per year.  But they want the good life, you know, the really GOOD life, so they borrow another $42,000, such that 42 cents of every dollar earned, is borrowed.  (That 42 cents is germane to this discussion.)  The family has managed its money fairly well and has stacked up some significant assets in savings, rental property and stocks.  So the husband goes to the bank and says, “I want to borrow $42,000.”  The banker looks at their financial statements and says the borrowers have the income and assets to pay back the loan and grants it to them.

Being truly generous people, they can’t turn down the new needy families and start to draw down their loan even more.  Upon assessing their finances at the end of the year, they realize that in order to support all the needy families they have taken on, they are going to have to borrow more money.

So they go to the bank again and ask the banker for another $42,000.  The banker scratches his head a little but since the generous family has made their payments regularly and on time and their assets are still intact, he agrees to lend them another $42,000, over and above their income of $100,000 and on top of the previous $42,000 loan.

As you might expect, more families learn of this grand generosity and show up on the doorstep to ask for assistance.  Hearing their sad luck stories, our generous family doesn’t have the heart to turn the new families down.

By the end of the second year, however, they realize they don’t have the money to help all of the families they have taken on and must go back to the bank for another $42,000 loan.  But during the second year, the generous family is not so timely with their payments.

Now in the real world, the banker looks at the total outstanding loan amount, the irregular payments, the declining assets and tells the generous family the bank can’t lend them any more money.  That would be the end of the story and the generous family would have to start cutting back on the families they are helping.  Eventually, without a new loan of $42,000, there is no way they can help the poor families, pay their normal expenses and pay down the $84,000 loan they have previously borrowed.  Without a massive cutback in providing assistance to needy families, they will go bankrupt.  In fact, their hearts couldn’t deny the needy families they were helping and our generous family did go bankrupt.  Irrational compassion bankrupted them.  While in bankruptcy court, they lament to the judge that if they just could print their own money, there would be no end to the families they could help.

The people are the collateral for the loans taken out by government to buy the people’s votes so the government can rule the people.  Each individual’s Social Security number is their loan number for the national debt.  The American people have become debt slaves to their own money that is used against them and to divide them.

Who led us down this path to destruction?  The lust for power led us here, and it was the lust for power that found the “key” to staying in power.  The “key” was buying votes.  However, in order to buy more votes to stay in power, the politicians realized they couldn’t help all those needy families without borrowing money.  But government doesn’t only borrow money; it can print it.

So government creates programs to help the people with direct cash, rent, food, telephone, education, college and medical expenses.  The government has created at least 80 such programs.  One person gets on one of the programs and finds it’s a smooth deal.  They don’t have to work for it.  That one person tells 10 more people and those 10 apply for the assistance.  The program rapidly runs out of money.  So the politicians raise the budget, not wanting to lose those new votes coming onto the assistance program and appropriate more money.   Where did the politicians get the money?  Part of it came from taxes and part of it came from borrowing the money from the Federal Reserve and other nations, like Japan and China.  42 cents of every dollar spent is borrowed.  Where did the Federal Reserve get the money?  They printed it with government authority.  It’s legal under law but financial collapse becomes a self-fulfilling prophecy under this law.  Some have called it a death spiral.  The Constitution, freedom, liberty, or property rights will mean nothing when the nation collapses.

Then along came another concept in the 1930’s that aggravated the situation even more, Keynesian economics!  (https://en.wikipedia.org/wiki/Keynesian_economics   Keynesian economics says it is OK for the government to smooth out the bad times by adding more money to the financial system, no matter where they have to get the money.  Where did the government get the new money?  The Federal Reserve printed it, of course, and handed it over to the government as a loan, at interest for which the people get to pay.

It gets even worse from there.  The banks, central banks and affiliates, engage in the practice of what is called fractional reserve lending.  This is a great high-profit scheme that allows the banks to lend out 10 times more money than is contained in bank deposits.  The reserves to cover for bad loans are a minute fraction of the amounts at risk.  This works OK for a while, that is, until there is a bank run, or a “dot com” or “housing bubble,” where the housing loans are riddled with bad loans that cannot be paid off by the miniscule bank reserves.  The big banks get caught up in the scheme, and when the bubble bursts, they become too big to fail.  Who bails them out? the American citizen of course, because every man, woman, child and the unborn are on the hook for the bad loans.

The central banks are tanking all over the world.  There are hard rumors that Deutsche Bank could be on the verge of collapse and if it fails, Barclays and Citibank could follow like dominoes.  There are strong signs of a “flight” to gold.  The stock market is headed down into bear territory.  The price of crude oil is trending down as the market responds to an oil glut.  Why?  The markets are just responding to the effects of worldwide socialism, multi-culturalism, never-ending wars and crushing regulations.  One only need look at the countries of Greece and Venezuela to see the cost of socialism.

Who came up with these fantastic schemes to make large profits for the banks and stay in political power using your money?  The Progressives, the liberals, the socialists, the Democrats and the bankers came up with the scheme starting in 1913 with the passing of the 16th Amendment, then FDR’s New Deal and Social Security that is now bankrupt, on top of President Johnson’s Great Society, along with Welfare, Medicare, Medicaid and ObamaCare.  This doesn’t even take into account the continual passage of strangling regulations.

Meanwhile, your government allows millions of illegal aliens to pour into America, looking for a better life, which comes on the backs of the American citizen who gets to pay for everything the illegal alien consumes, while taking the jobs legal Americans need and deserve.  The Democrats hail the illegal hordes as future voters of America, who just happen to vote Democrat because the illegals come from socialist countries.  No wonder Trump is so popular.

So whether you are a Democrat, Republican, or an Independent, think long and hard who you are going to vote for in 2016.  Your decision could either accelerate the demise of America because of what we have written here, or set her on a slow path to solvency.  The current path only leads to national bankruptcy and the further loss of liberty, where the people become debt slaves, no better than the infamous sweatshops of the emerging Industrial age.

Government won’t be your savior in this world awash in debt.  Government will be a very aggressive debt collector.  Everything you own will be collateral for the national debt, and it won’t be safe from the government’s prying eyes as they confiscate America’s wealth to pay back the debt they put on you to buy your vote.

The only other thing that will stop this slide into the financial abyss is (and we say again) if “a critical mass of dedicated and courageous Americans finally decide to resist government tyranny by acts of civil disobedience on a grand scale, punctuated by the threat of force if necessary.”  Otherwise all of us will become debt slaves to the government and the bankers, if we aren’t already.

Tell us what you think:

“Is the National Debt a real danger to all Americans”

“No, the debt is manageable.”

The Gun To Every American’s Head added on Sunday, February 21, 2016