“WE DO NOT NEED ANOTHER POLITICIAN” 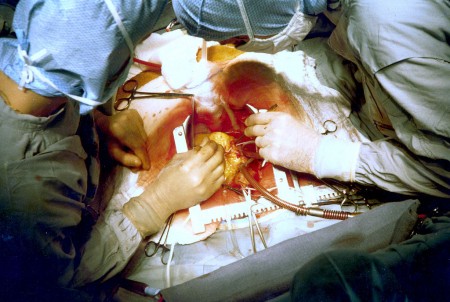 (Feb. 18, 2016) — America is in need of a real miracle and is at a historical and dangerous crossroad this election cycle.  Through the Obama reign from hell, she has been seduced and manipulated into Frankenstein’s international – redesign laboratory.  It is not ‘Obamastein’s laboratory because Obama only copies evil. He offers nothing new and original.

As America lies on the cold metal table looking around through swollen and tear-stained eyes, we see Obama putting down his golf clubs, having skipped yet another funeral, this time Associate Justice of the Supreme Court Antonin Scalia.  Obama boldly marches over to his operating table.  It is time to cut some more.

Obama and his minions saw off another leg – There goes patriotism and pride in our country;  – There goes the arm of religious freedom.  There goes ‘the light on a hill’ and inspiration to the nations.  – There goes the best health care system on earth – There goes truth-telling and real education in our schools as Common Core chops away.  What will rise up now?

Obama and the anti-American whores that hide and flourish in both parties are splitting open our very chest wall and attempting to reach in and pull out our heart.

The American patient must die but not too soon.  First, Obama and the controlling Government crowd must see us suffer more.  As the lame-brain GOP continues to look the other way and the DEMOCRATS continue to play, our body parts continue to be severed and thrown around the room.

To survive we must move beyond the conservative and liberal sound bites we are told to swallow.  I don’t even know what liberal and conservative mean anymore.  The GOP and DEMOCRAT terms are manipulated battering rams that are bedfellows of the Vegas ‘sleight-of-hand’ act packing them in.  America is finally getting the real goal, and we ain’t as stupid as we sometimes look and act.

This is the plate of putrid food we are told to eat. The ends justify the means. To get elected I will say to the ends of the earth I am for the needy, minorities, women and freedom, when I am really for money, power and fame.

Only our God knows how the next presidential election will flesh out, but I believe with all my heart that conservative GOP hype is not what America needs and must have to survive.  Instead, we need real gut-level belief in America and her capitalistic way of achieving and producing.  America is unique and exceptional.  Why have a President ever again who apologizes for that?  Our next President must love and support her Judeo-Christian values that made her great.  America demands leadership that will undo the endless lies and corruption that have torn America to shreds.

It is not Conservatism or GOP anything I need.  I want a leader who loves America, God and freedom who has the ability, talent and courage to do what is right.

Though far from perfect, Trump is roaring successfully forward because he has captured in large part what has been lost from most of the politicians and political wanna-be power brokers.  That is belief and pride in America – passion and ideas to fix the largely ignored and emergency-level challenges we have – illegal immigration, violated national security and the treacherous and vastly compromised Veterans Administration – violating thousands of our nation’s finest.

Trump says he plans the energy pipeline that Obama has fought over and over again and says he will support gun rights and our 2nd amendment.  He talks of repealing Common Core and dealing with the Obamacare nightmare that is violating our health and bankrupting our nation.

Remember, Ronald Reagan had a liberal and Democrat background as well and transformed himself and his love for America (the key ingredient) into one of the best Presidents we ever had.

The GOP primaries get nastier and harsher as lies and assaults mount up.  Ted Cruz, who many support, is looking more shrill all the time as he blatantly lies about Trump, saying for one that Trump would end the second amendment if elected President. Cruz plays the victim card now, saying he is attacked when he only points out the truth.  I have heard Trump speak and read of his gun rights positions many times and that is a boldfaced lie no matter who you are behind.  Cruz pretends it isn’t a lie and we are to believe he is a breath of fresh air and as Rush points out – the real essence of Ronald Reagan…REALLY? When Trump gets back in Cruz’s face and demands an apology, Cruz shrieks that he is only telling the truth.  Apparently, the ends justify the means with Cruz, but keep paying attention to the ‘conservative and GOP sound bite’ man hiding behind the conservative curtain.

America needs passion, belief, and love for God and country sprinkled with talent, ability and guts.  We do not need another politician to push his career along.  Who is funding Trump???  He is.  Think about it, pray and show up to vote no matter what you do.  America is counting on you.

America Must Have Passion – Straight Talk – and Belief This Election – NOT the Same Old Conservative or Liberal Drool added on Thursday, February 18, 2016