Report: Trump Depicted as Soliciting Donations to the RNC

(Feb. 13, 2016) — On Twitter early on Saturday afternoon, presidential candidate Donald Trump reported that the Republication National Committee (RNC) has used his likeness in order to solicit funds to their organization. 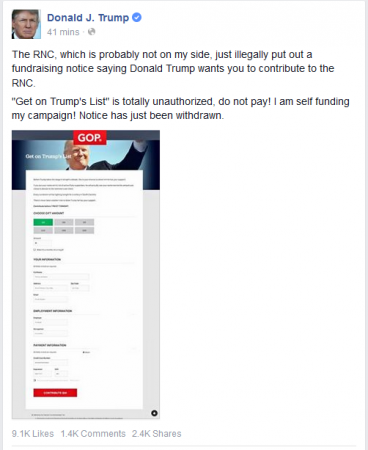 The RNC, which is probably not on my side, just illegally put out a fundraising notice saying Donald Trump wants you to contribute to the RNC.

“Get on Trump’s List” is totally unauthorized, do not pay! I am self funding my campaign! Notice has just been withdrawn.

Trump has been running a non-traditional campaign appealing to grassroots Americans from all sides of the political aisle who are disillusioned with the party politics of the national Democrat and Republican Parties.

While locating other posts including Trump’s name at the RNC website, The Post & Email was not able to locate the exact post to which Trump referred, nor did we find it on the RNC’s Facebook page.

Trump had reported that “Notice has just been withdrawn.” 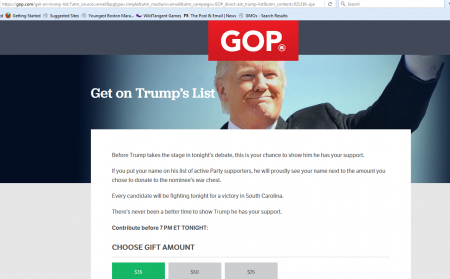 Report: Trump Depicted as Soliciting Donations to the RNC added on Saturday, February 13, 2016