“ONE OF THE MOST IMPORTANT RESPONSIBILITIES WE HAVE” 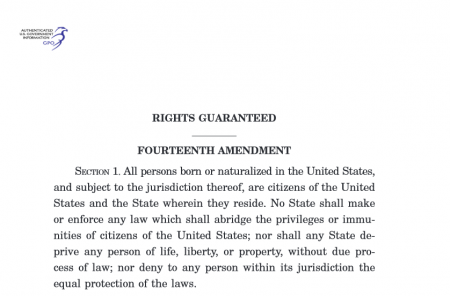 (Feb. 11, 2016) — Under the heading of, “you never know the impact your life will have,” I’d be willing to bet that two guys born abroad decades ago named Beys Afroyim and Aldo Bellei had no idea what a central role they will likely play in picking the next president of the United States.

That’s because lost in the discussion over whether or not Ted Cruz is a ‘natural born Citizen’ as required by the Constitution to be president is the fact that Aldo Bellei – who had the same underlying birth circumstances as Ted Cruz – was determined by the Supreme Court in 1971 to not qualify as a ‘First Sentence’ 14th Amendment citizen because Mr. Bellei was not ‘subject to the jurisdiction’ of the United States.

So forget about arguing whether or not Cruz is a natural born Citizen – you obviously can’t be natural born if you’re not ‘subject to’ U.S. jurisdiction, period.

Let that sink in…and I’ll come back to that in a moment.

In the meantime, here are the relevant facts of the issue, and how Beys and Aldo come into play:

Beys Afroyim was born in Poland to two Polish parents and immigrated to the U.S. in 1912, just as millions of other immigrants have done over the years. Per U.S. law, Afroyim went through the formal process (think Ellis Island, Oath of Allegiance, etc.) to become a U.S. citizen, and in 1926, young Mr. Afroyim became a ‘naturalized’ U.S. citizen (see case link below).

However, Beys then traveled to Israel in 1950, and in 1951, he voluntarily voted in an Israeli election. In 1960, when he applied for renewal of his United States passport, the Department of State refused to grant it on the sole ground that he had lost his American citizenship by virtue of § 401(e) of the Nationality Act of 1940, which provides that a United States citizen shall “lose” his citizenship if he votes “in a political election in a foreign state.” To make a long story short, Afroyim petitioned the Court to basically say that under the 14th Amendment, the Court lacked the power to strip an American citizen of his citizenship once granted as long as that citizen never took steps to voluntarily surrender his citizenship.

After losing in a lower court, the U.S. Supreme Court ruled in 1967 that Afroyim was right, and said that since he was naturalized in the U.S., he now was covered by the protections offered by the 14th Amendment, which among other things says that Congress has no “power, express or implied, to take away an American citizen’s citizenship without his assent,” according to the Supreme Court in Afroyim v Rusk (1964).

So that’s pretty clear, right? Once granted, and you’re under the wing, so to speak, of the U.S., unless you raise your hand and say ‘let me outta here,’ then the government can’t give you the boot. Simple as that.

And then, just four years later, along comes Aldo Bellei, and the Court totally throws a monkey wrench into what seemed like a pretty cut-and-dried decision, and with it, any hope that Ted Cruz can be president, or vice-president, for that matter.

Aldo Bellei was born in 1939 in Italy, but significantly, he was born to an American woman and an alien father, which is the same underlying birth circumstance we have with Cruz except, of course, the date and location, but neither are relevant for this discussion.

As a result, Bellie obtained his citizenship under a different section of U.S. Naturalization law than did Afroyim since Bellei’s was obtained ‘outside’ the U.S. (i.e., not via Ellis Island, Oath of Allegiance, etc.).

And to make another long story short, Bellei was stripped of his citizenship as a result of his failure to meet certain ‘residency requirements’ imposed by law during that time to children born abroad to an American parent and an alien. Bellei sued and lost, and subsequently was stripped of his American citizenship since he violated those requirements. Incidentally, those residency laws were repealed in 1978.

However, for the sake of this essay, the residency requirements did not affect his underlying birth circumstance, nor impact one of the key findings of the Court, which was that since Bellei was naturalized OUTSIDE the U.S., he was not ‘subject to the jurisdiction’ of the U.S., and as such, was not protected by the 14th Amendment, which says in the first sentence: “All persons born or naturalized in the United States and subject to the jurisdiction thereof, are citizens of the United States and of the State wherein they reside” (emphasis added).

Here’s how the Supreme Court said it in Roger’s V. Bellei (link below):

“The central fact in our weighing of the plaintiff’s claim to continuing and therefore current United States citizenship is that he was born abroad. He was not born in the United States.

That key foundational finding is what then allowed the Court to proceed with the remaining elements of the case, which ultimately ended with Bellei losing his citizenship – in stark contrast to Afroyim keeping his.

Between the two cases, we see for the first time a clear distinction in the two types of naturalized citizens afforded under U.S. law – one that provides ‘automatic citizenship at birth’ to those born abroad to an American parent and an alien, and another type of naturalization that is available to immigrants that move here to start a new life, and who pass through a formal process.

Both types of naturalization provide U.S. citizenship, but according to the Supreme Court, neither type create ‘natural born citizens’ that are eligible to be president. Here’s how the Court said it in Schneider V. Rusk (1964): “We start from the premise that the rights of citizenship of the native born and of the naturalized person are of the same dignity, and are coextensive. The only difference drawn by the Constitution is that only the “natural born” citizen is eligible to be President, Art. II, Sec 1.”

Given the Court’s decision in Bellei, there is no reason to believe it would overturn that ruling for Mr. Cruz today. That means that not only is it self-evident that Cruz is NOT a natural born citizen, but it also means that according to Constitution, he is not even considered to be ‘subject to the jurisdiction’ of our country. To be clear, I’m not saying Cruz is not a ‘naturalized’ citizen, just that he’s not a ‘natural born’ citizen, and also that he’s not subject to U.S. ‘jurisdiction’ as it relates to the protection provided by the 14th Amendment.

The implications of that fact are literally mind-numbing, and obviously disqualify him to be sitting in the Oval Office as president in January 2017 with SOLE control of the U.S. military, and his finger on the nuclear button.

And to those who want to dismiss this truth as ‘old news’ since Obama already broke the mold, I would remind people that Obama has been able to at least fool most people into believing he was born in Hawaii, which, if true (and it’s not, IMO), means that while Obama still does not qualify as a natural born citizen by virtue of his father’s status as an alien, he at least can make the case that he is a 14th Amendment citizen, and therefore is ‘subject to the jurisdiction’ of the U.S.

But the Cruz situation is a whole other animal, it’s completely unprecedented, and it clearly presents a national security risk to the nation, first in the case of Cruz, and for years to come if we open the door to future presidents whom also might not be ‘subject to’ U.S. jurisdiction themselves.

Here’s the irony in all of this: Beys Afroyim, an immigrant from Poland, became a naturalized U.S. citizen, and as part of that formal process, pledged his allegiance to his new country, even though neither of his parents was an American citizen.  As a result of that ‘all in’ posture, Afroyim was allowed to keep his citizenship despite breaking the law in 1951.

Conversely, Aldo Bellie, the son of an American woman born abroad, did not formally pledge his allegiance to the U.S., and as a result, lost his citizenship when he broke the law.

Ted Cruz, also born abroad to an American woman, was ‘naturalized’ at birth according to law, but as far as we know, has never passed through a formal ‘naturalization’ process, nor has he recited a formal ‘Oath of allegiance’ to the United States. Both Afroyim and Cruz are naturalized citizens, but neither are natural born.

HOWEVER, while most people today would agree that Beys Afroyim could NOT be president today despite formally pledging allegiance to this country and becoming a naturalized citizen (think Arnold Schwarzenegger), Cruz and his supporters apparently think Cruz can be president without ever pledging his allegiance to the U.S.

How bizarre – and scary – is that?

Here’s what Founding Father Alexander Hamilton said in the Federalist Papers less than a year after the signing of the Constitution, and in reference to the natural born Citizen clause, which is a convincing warning as to why we should never let that happen.

“Nothing was more to be desired than that every practicable obstacle should be opposed to cabal, intrigue, and corruption. These most deadly adversaries of republican government might naturally have been expected to make their approaches from more than one quarter, but chiefly from the desire in foreign powers to gain an improper ascendant in our councils.

How could they better gratify this, than by raising a creature of their own to the chief magistracy of the Union? But the convention have guarded against all danger of this sort, with the most provident and judicious attention.”

Alexander Hamilton and John Jay specifically warned us of the need to keep out foreign-born Americans from the highest office in the land.

As a nation, we have a duty to elect the best, most-qualified man or woman to be the next president and commander-in-chief. As citizens of the republic, it’s one of the most important responsibilities we have and that we enjoy as Americans.

And while we can argue all day long over who has the best tax policy, foreign policy, or immigration strategy, one thing we should all agree on is that we should never elect a president who is not ‘subject to the jurisdiction’ of the United States of America, and instead, commit to elect only an Article II, Sec I, Clause V natural born Citizen.

This Is Scary – ‘President’ Cruz Would Not Constitutionally be ‘Subject to The Jurisdiction’ of The United States of America added on Thursday, February 11, 2016