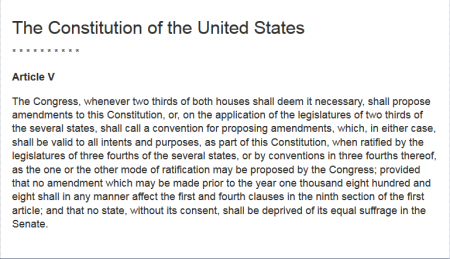 “The Congress, whenever two thirds of both houses shall deem it necessary, shall propose amendments to this Constitution, or, on the application of the legislatures of two thirds of the several states, shall call a convention for proposing amendments, which, in either case, shall be valid to all intents and purposes, as part of this Constitution, when ratified by the legislatures of three fourths of the several states, or by conventions in three fourths thereof, as the one or the other mode of ratification may be proposed by the Congress; provided that no amendment which may be made prior to the year one thousand eight hundred and eight shall in any manner affect the first and fourth clauses in the ninth section of the first article; and that no state, without its consent, shall be deprived of its equal suffrage in the Senate.”

The Congress of the United States, currently the 114th, is completely disregarding the wishes of the citizenry. In a count conducted “In 1990, Judge Bruce Van Sickle and attorney Lynn M. Boughey compiled a list from the Congressional Record of state applications for an Article V Convention in the Hamline Law Review.” That report lists 47 states had made application for an Article V Convention of States. Only Hawaii, Mississippi and West Virginia had not made an application.
https://en.wikipedia.org/wiki/List_of_state_applications_for_an_Article_V_Convention#Counts_By_States

The following statement is absolutely FALSE: “According to Article V, Congress shall call a Convention for proposing Amendments, “on the application of the Legislatures of two thirds of the several States,” meaning 34 state legislatures would have to submit similarly-worded applications calling for specific amendments or specifying the same type of amendments to be considered.”  Underlining is by this author. No such limitations are placed upon the states by the Constitution in its presentation of Article V.
https://en.wikipedia.org/wiki/Convention_to_propose_amendments_to_the_United_States_Constitution

“This method, (An Article V Convention) has been close to utilization several times. Only one State was lacking when the Senate finally permitted passage of an amendment providing for the direct election of Senators.23 Two States were lacking in a petition drive for a constitutional limitation on income tax rates. 24 The drive for an amendment to limit the Supreme Court’s legislative apportionment decisions came within one State of the required number, and a proposal for a balanced budget amendment has been but two States short of the requisite number for some time.
https://www.gpo.gov/fdsys/pkg/GPO-CONAN-2002/pdf/GPO-CONAN-2002-8-6.pdf

The underlined sentence above was due to the Chicanery of our Twenty-eighth President and our First Socialist President and coincidentally supported by one James Wilson in the Constitutional Congress. The method adopted by the Framers was intended to serve as “some protection against the swallowing up of states and their powers by the federal government,[5] providing a check on the power of the federal government.”
https://en.wikipedia.org/wiki/Seventeenth_Amendment_to_the_United_States_Constitution#Background

During the administration of Barry Soetoro, aka Barack Hussein Obama, it has been obvious that having a sycophantic, same-party Senate is the impediment to getting any meaningful legislation enacted into law.

Having in office simultaneously a traitorous, unqualified and un-American Chief Executive, a sycophantic Senate and a lackluster, dilatory, do-nothing House, it becomes an indisputable fact of life; We Must have an Article V Convention of States NOW! The House of Representatives has been grossly negligent by not impeaching Soetoro-Obama, thus leaving it up to the agencies within the Executive Branch to bring their boss to the bar of justice. This citizen accuses the so-called Republican Leadership of gross misconduct, blatant cowardice and Violation of their Oath of Office.

Therefore, I once again DEMAND Articles of Impeachment be drawn up immediately by the House Judiciary Committee, voted upon and sent by the House Managers to the Senate for trial. A little “Friendly” persuasion of the members of the Senate may just be enough to get a modicum of justice to partially compensate for the inordinate number of crimes Soetoro-Obama has committed. You should be able to read the writing upon the wall, Act or We the People will remove your disrespectful derriere from office AND call an Article V Convention!

An Article V Convention of States added on Wednesday, February 10, 2016

3 Responses to "An Article V Convention of States"