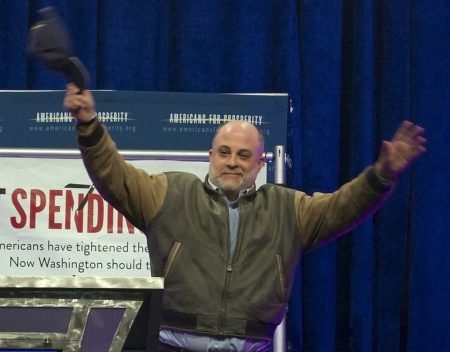 (Feb. 9, 2016) — Mark Levin, the self-proclaimed constitutional scholar and historian who has been on a rant lately attacking the “kooks” and “goofballs” who dare question the citizenship status of Senator Rafael “Ted” Cruz, has revealed himself to be an unabashed Cruz partisan, willing to go to any lengths to propagate the “Cruz is Eligible to be POTUS” lie.

The breath-taking arrogance of Levin on this issue and his repeated attempts to contort the Constitution, conflate the meaning of “Natural Born Citizen” and “Citizen,” avoid the intent of the Framers and diminish the purpose and plain meaning of the presidential eligibility clause shows that either Levin’s constitutional expertise is not what he purports it to be or that he has chosen to purposely misinform and mislead the millions of listeners who hang on his every word.

Back in August of 2013, Levin who runs his radio program in the manner of a “tin-pot dictator” first waded into the Cruz eligibility issue by stating unequivocally that he was “…so sick of those birthers” thereby relating an incident where an individual confronted him at one of Levin’s incessant book signings saying: “…that Cruz was ineligible to be POTUS; that Cruz was not a Natural Born Citizen”.

Levin further commented about the incident as follows:

(In fact you can listen yourself to the entire segment here:  https://www.youtube.com/watch?v=z8__Iwc08MQ )

Levin mockingly: …”But he’s (Cruz) born of a mother who is an American citizen. Doesn’t it make him a Natural Born Citizen?”

I don’t know Mark…you’re the constitutional expert.  You tell me.

Levin mimicking his confronter:  “Nah…but he was in Canada when he was born! “

Note that Levin merely states that Cruz is an American citizen.  He doesn’t say that Cruz is a Natural Born American Citizen which is the exceptional standard of citizenship constitutionally (Article 2, Sec 1, Clause 5) required for POTUS and commander-in-chief of the military.  Instead Levin purposely conflates the two terms; effectively bamboozling his audience as he plays to the ignorance of most Americans and their unfortunate widespread misconception that the POTUS need only be an ordinary citizen to be eligible.

This cynical effort by media whores like Levin, Bill O’Reilly, Glenn Beck, Sean Hannity and others to diminish the purpose and meaning of Natural Born Citizen has been enthusiastically aided by a complicit and irresponsible left-leaning media and a dysfunctional educational system that has worked tirelessly for the past fifty years or so to denigrate the Constitution and our founding principles. The result has made our kids think they’re citizens of the world instead of being proud of America as an exceptional country with a rich and noble history.

The crux of Levin’s “Cruz is Eligible” argument is that anyone born abroad to just one American citizen parent is an American citizen and thus eligible to be POTUS.  Just common sense would tell you that is a ridiculous notion.  Under that rubric alone, Sir Winston Churchill (born in England to an American mother) was eligible to run for POTUS; a fact that Churchill himself dismissed as patently unconstitutional.

Levin rails on: “That’s an interpretative issue… or a statutory issue if Congress has passed some laws subsequent to that to enforce that provision of the Constitution.  So the face of the Constitution isn’t terribly helpful.  In my view there is no doubt about it that he (Cruz) is eligible to be POTUS if he chooses to run. That’s my OPINION.”

Levin has completely lost it here. Levin talks about statutes or laws passed to enforce the (eligibility) provision of the Constitution.  Excuse me? Congress doesn’t enforce the Constitution. The Constitution of the United States of America is the supreme law of the land and is enforced by the Federal Courts, headed by the Supreme Court!  Where pray tell me “Oh Great One” has Congress passed laws to enforce the presidential eligibility clause?  And then he concludes his argument by stating that it’s just his OPINION!  Wait…I thought Levin was weighing in as the expert?

Note that I did not say that citizenship law as it relates to the term NATURAL Born Citizen had evolved.  It hasn’t. Never has. The meaning of NBC has never changed and no statutes passed by Congress under Article 1 Section 8 has ever attempted to invoke the term or even redefine the term with the exception of the 1790 Naturalization law repealed in 1795.  Congress has absolutely no power to do so.

The Not So Great Mark Levin added on Tuesday, February 9, 2016