Why Does Walter Fitzpatrick Have “Wounds?”

(Feb. 8, 2016) — Several weeks ago, The Post & Email received two letters from Walter Francis Fitzpatrick, III, who is an inmate at the Northwest Correctional Complex (NWCX) in Tiptonville, TN.

Fitzpatrick is serving a three-year sentence for “aggravated perjury” and “extortion” after attempting to inform the McMinn County grand jury of corruption within the judiciary, prosecutor’s office, and the grand jury’s own foreman, Jeffrey Cunningham on March 18, 2014.

Fitzpatrick was arrested while awaiting a decision on whether or not he would be allowed to testify to the grand jury while sitting on a bench outside of the grand jury room reading a book.

On January 6, Fitzpatrick wrote in a letter to The Post & Email that one or more envelopes he had tried to send  were withheld from the mail stream and sent to Tennessee Department of Correction (TDOC) Deputy Commissioner Jason Woodall, as indicated by an enclosed “Memorandum” from Warden Mike Parris. On the majority of the letters we have received since his incarceration in August 2014, Fitzpatrick has placed “Legal Mail” on the envelope.

“You may appeal this decision to the Deputy Commissioner of Operations within fourteen (14) days. A failure to appeal will result in rejection of the mail and its return to sender” appears beneath the written explanation for the “rejected” mail on page 1 of the Memorandum.

In the letter accompanying the memo, Fitzpatrick told us: As the Memorandum did not provide the name of the Deputy Commissioner of Operations, we contacted TDOC spokeswoman Neysa Taylor by email, who responded the same day with “Jason Woodall.”

In a letter dated January 9, Fitzpatrick reported that his cell was raided “once more on Tuesday evening, 5 January 2016…It took about 30-40 minutes to destroy the cell.  ’bout 60-75 minutes to clean up after the assault team retreated,” Fitzpatrick wrote.  “The 5 January 2016 cell attack is the third one targeting me since mid-June.  Both the raids in guild unit #2 took place inside one month…”

He then said that four postage stamps were taken by a unit manager and not returned. 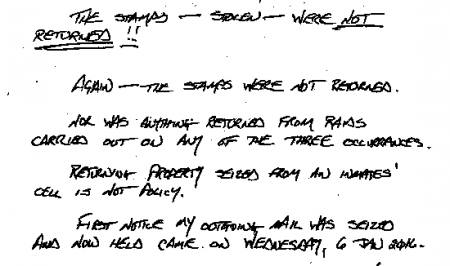 On January 30, The Post & Email published a letter from an inmate who wrote, “Walt Fitzpatric cell gets took apart by police on a weekly basice.  Its because he write you. [sic]

On January 14, we sent Woodall a certified letter requesting that the mailing be released to us and that the four stamps taken from Fitzpatrick be returned to him.  Our letter to Woodall included Fitzpatrick’s description of how he had placed bandages “in an envelope.  The envelope was then placed into a plastic Ziplock bag.  The secured Ziplock bag containing the envelope containing the bandages was then placed into the addressed mailing envelope.  The wound bandages were triple secured and sealed for the sake of maintaining confidentiality only.”

As of last Thursday, we had received no response from Woodall.  We therefore called his office and left a message with his secretary, who had left for the day at 11:30 a.m. CST.

On Monday, we contacted Woodall’s office a second time at the number we had used on Thursday, which produced a message that the number, 865-253-8172, does not take incoming calls.

We therefore called the main number, 615-741-1000, and followed the prompts to reach Woodall by entering his first and last name.  Reaching his secretary in person this time, we were told that “rejected” mail is not sent to Woodall, but rather, remains in the facility where it originated.

We then called NWCX at 731-253-5000 at approximately 1:11 p.m. CST and asked for the warden but were told he was out to lunch by a woman identifying herself as an assistant warden.  After explaining that we were seeking an inmate mailing from several weeks ago, the woman suggested we speak with the mail room and transferred us there.

The mail room employee to whom we were connected said that she did not know what might have happened to the package(s) and transferred us to the Internal Affairs department.  The employee there, Shannon, was helpful and courteous, informing us that withheld mail does not go to Woodall.  After speaking with us for several minutes, she transferred us back to the mail room, where we spoke with a different female employee who was familiar with the case.

After explaining that we were seeking one or more missing envelopes, the woman asked us the sender’s name, to which we responded, “Walter Francis Fitzpatrick.” We asked if she needed the inmate number, to which she responded, “No, ma’am, I know his number by heart.” She asked our name, and we told her, remarking, “You probably know my name by heart, too,” to which she said, “Yes, ma’am, we do.”

“I’m the one who had to deal with his nasty, infected materials,” the mail room lady then unexpectedly said.

“Yes, I guess someone accused him of putting something in that was biohazardous,” we said, recalling two of Fitzpatrick’s letters which raised that issue.

“Are you able to send me the remaining contents of the envelope?” we asked.

“We don’t send out contents like that.  Everything in there goes to waste.  When you have something infected like that, we don’t send nothin’ out like that.  It was not legal contents; it was some kind of letters he had wrote up to you.  If they had been legal, they would have had to try to do something else, but there was no legal mail in there, and everything in there was contaminated…”

“He told me he triple-packaged it.”

“He had wounds, some kind of wounds, I don’t know what kind he had, but when he go to get his wounds changed, they supposed to throw his old bandages and stuff away.  But I don’t know how he got to keep ’em, but he can’t do it anymore. No, ma’am, he can’t do that.”

“So you’re saying that whatever else was in the packages was destroyed?”

“Everything goes destroyed; if it was biohazard waste, then that’s what it is:  ‘Biohazard.'”

“Then you’re quite sure as of this point that whatever else was in those envelopes was destroyed?”

“I know it was; I had to put it into the Biohazard.”

“And what is your name?”

“OK; I’ve talked to so many people – I’ve been on the phone for almost an hour trying to find out what happened to these envelopes, so I’m just trying to keep track of the people I’ve spoken with.   The internal affairs lady was very nice and thought she should send me back to you.  Are you able to tell me this:  was there more than one envelope?”

“It was four envelopes of biohazard waste with blood and infected…it looked like pus or something on it.”

“How did you know that that was in the envelope?”

“Because he sent it out and he didn’t have enough postage on it, and when it came back in, it made it legal for the mailroom to be able to open it.  When we opened it, that’s what was found.  We can’t check their mail when it goes out, but once it goes out and if he doesn’t have enough postage or something on it and they send it back in, that makes it legal for us to open it so we can get it back to the inmate to put postage on it.”

“You have a way to tell [if there’s enough postage], don’t you? He’s usually pretty good about knowing how much to put on.”

“Um-hmmm.  I remember the package, and there wasn’t enough postage.”

The mail room worker then said that Fitzpatrick was notified in writing of the return of the mailing.  “He got a letter stating where it went and what was in it.  He got a letter from me.  The warden has to reject it, and the warden rejected it…”

We then thanked her taking the time to speak with us and wished her well.  “I’m glad I was able to help you if I did help you,” she responded.

In his last letter, dated January 24, Fitzpatrick wrote, in part:

The situation here is seriously volatile…I am the object of psychotropic and psychological warfare.  Unnecessary, permanent physical injury is ongoing.

I experience pain every day.

Deterioration is constant in every moment.

My expectation is these circumstances are going to continue for a long time.

I am at a point whereupon I do not want any mail unless there is a report of a positive result.

We have not written to him since.

Why Does Walter Fitzpatrick Have “Wounds?” added on Monday, February 8, 2016

2 Responses to "Why Does Walter Fitzpatrick Have “Wounds?”"