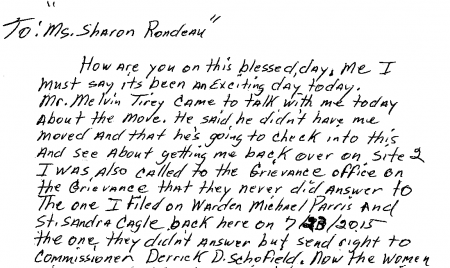 (Feb. 4, 2016) — In December, Tennessee Department of Correction (TDOC) inmate Jerome L. Johnson was unexpectedly moved from Site 2 to Site 1 at the Northwest Correctional Complex (NWCX) as a result of what he believes was retaliation by prison staff for his refusal to participate in the Pro-Social Life Skills (PSLS) class.

Site 1 is the most dangerous of the three housing locations at NWCX and was the scene of widespread gang violence on July 24, 2015.

Johnson was issued a “Class A” disciplinary write-up and sentenced to ten days in “the Hole,” or solitary confinement; loss of his job in the prison kitchen; a $5.00 fine and loss of earned privileges to date for good behavior while incarcerated.  To The Post & Email’s knowledge, the sentence has not yet been carried out.

However, Johnson’s move to Site 1 without an official reclassification is reportedly a violation of TDOC policy, and he believes that not only was he retaliated against for his stance regarding the course, but also discriminated against for his conviction of non-compliance as a black man while a white man escaped the same conviction and punishment for the same alleged infraction.

The white inmate is Walter Francis Fitzpatrick, III, who was later issued a second disciplinary write-up and convicted after he was asked to leave the room while the panel discussed it.

Fitzpatrick is reportedly in very poor health and is halfway through his three-year sentence for “aggravated perjury” and “extortion” stemming from his attempts to inform his county grand jury of corruption on the part of judges, prosecutors, court clerks, and their own foreman, who was handpicked by then-Judge Amy Armstrong Reedy.

At least one, but it is believed to be more, of Fitzpatrick’s recent mailings to The Post & Email have been seized from the mail stream and are reportedly in the custody of Jason Woodall, Deputy Commissioner of Operations for the TDOC, who we contacted by certified letter last month and unsuccessfully by telephone on Thursday.

Because the U.S. Supreme Court has ruled that there cannot be prejudice in the selection of a grand jury foreman in Rose v. Mitchell and Hobby v. U.S., it cannot be reasonably expected that any inmate within the TDOC system has received due process based on Tennessee’s custom of allowing judges to hand-pick the foreman “from wherever they choose.”

Since July 23 of last year, Johnson has filed grievances resulting from the disciplinary board’s decision, the racial bias he perceives in the meting out of punishment, and most recently, his move to Site 1 without the citation of a reason by the warden.

Over the past ten days, The Post & Email has received a number of documents detailing the progress of his grievances; in one of them, contrary to the TDOC Administrative booklet, the Title VI civil rights coordinator informed Johnson that participation in PSLS “is not mandatory.”

In one of his recent letters, Johnson indicated that he has seen some movement on his request to be relocated back to Site 2.  However, documents he provided also demonstrate that NWCX staff has violated its own grievance procedure in regard to timeliness of response dating back to his first grievance.

Several other inmates have reported being forced to take PSLS, which is aimed at changing criminal behavior surrounding drugs and alcohol use.  Workbook exercises for the course ask the student to admit to his criminal behavior in order to find ways to alter it. After asking TDOC spokeswoman Neysa Taylor if she would investigate whether or not inmate John Brewer was placed in the class against his will as stated in his recent letter, we received no response. Will Claims of Prison Retaliation, Discrimination Be Addressed? added on Friday, February 5, 2016