WILL OBAMA MANEUVER A “THIRD TERM” IN THE WHITE HOUSE? 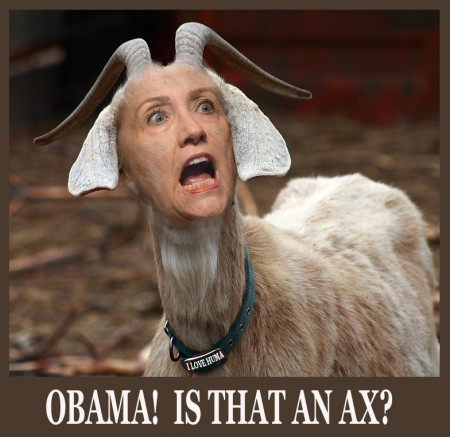 (Jan. 30, 2016) — The term “scapegoat” was used in the Bible when two goats were symbolically chosen on the Day of Atonement to bear the sins of the children of Israel, one was then sacrificed and the other was sent into the wilderness.  Today the connotative meaning of the word has been expanded to mean anyone that takes the fall for another person – either willingly or unwillingly.  And the unwilling can also be unwittingly used by those clever enough to take advantage of their shortcomings.  So much worse is the case for this category of scapegoat if the opportunist happens to know where their skeletons are buried and is also fully aware of their blind weaknesses.  I believe such is the case for Mrs. Hillary Rodham Clinton.

Before presenting this unusual opinion, let me say that I am not claiming to be a prophet, nor do I have a crystal ball hidden somewhere in my home to consult.  However, the current presidential race and its cast of characters has forced me to ask some interesting questions, which in turn developed into a hypothesis that for the purpose of this writing I will call an “assumptive scenario.” In this assumptive scenario, Mrs. Clinton is the political scapegoat and Barack Obama is the opportunist – the opportunist with a clever strategy that will effectively give him a third term and permanently silence a woman he detests.  Let me begin with a widely held assumption  that Obama is not fond of Hillary – to put it mildly.

Here’s how it goes.
In order for Obama to get the Clintons to back off during the 2008 campaign season, he struck a deal with them.  Now some might say that the Clintons struck a deal with the devil himself, but others could say the same about Obama.  Either way, the deal was that the Clintons would gracefully retreat from their plummeting campaign and endorse Obama in exchange for Hillary’s Secretary of State appointment – an appointment that could potentially pave the way for her 2016 presidential campaign.  With forced smiles for the cameras that nearly cracked their faces in half, all parties did what was expected, but the thin-skinned Obama never buried his disdain for the alleged sexual abuser and his enabling cohort. In spite of his disdain, Obama kept his end of the deal and even managed to offer words of support for Hillary in 2015, but don’t kid yourself, the Narcissist in Chief doesn’t forgive and forget easily.  Only Christians do that, and no matter what he says, this liar doesn’t bear the fruits of Christianity.

For the purpose of this scenario, I will further assume that Barack Hussein Obama is as vindictive as he is narcissistic.  After all, do you really think Lois Lerner of IRS fame acted on her own?  Even if she did, somehow she managed to escape the prosecution she deserved. So what would a vindictive narcissist do if he was forced into making a deal that he hated with a person he hated?  I think he would appear to uphold the deal but come up with another plan to sabotage the victim of his hatred. Keep in mind this is only my assumptive scenario, with “assumptive” being the key word.  Nevertheless, I’m making it public because with every passing day the likelihood of its veracity seems more and more likely.

So, what do we have so far?  A deal made between two enemy factions that has been upheld. But now one of the factions is about to be glorified as a result of the deal and the other faction is a vindictive narcissist who is also clever and in a position of great power.  Not only would this great power put him in a position of achieving his desired retribution clandestinely, but his would-be victim is virtually clueless.  She thinks that her powerful counterpart is honorable enough to uphold his end of the deal without taking retribution in some other manner.  Consequently, she foolishly and naively believes that the criminal charges against her will somehow disappear, just like those of Lois Lerner and Eric Holder in the Fast and Furious debacle.  After all, didn’t Benghazi – at least to some extent? If this scenario holds any truth, they won’t.  And Mrs. Clinton should prudently be making plans to live behind bars instead of white marble columns.

But is there more to this devilish plan? Remember, in this scenario I proposed that Obama would somehow secure a third term.  Here’s how.  He lets Hillary campaign, drawing all the ire and the attention of the Republican candidates, while his lackeys and next in line – Joe Biden or John Kerry – sit back enjoying the show.  In the meantime, Biden tests the waters with the perfect excuse that he is not emotionally prepared to run, which may have been true at that time but not true for the duration of the campaign.  The results are overwhelming – the likeable Biden would just about walk away with the Democratic nomination – and maybe even the presidency.

Of course there’s Bernie Sanders to contend with.  The argument here is that Sanders is not even a registered Democrat, so how could he possibly represent the Democratic Party?  And let’s not forget that Biden has recently made comments regarding Sander’s socialistic philosophies. Casual comments or a planned strategic move to plant some seeds?  Time will tell.

To her great surprise, Hillary is properly indicted and convicted, with Obama lurking in the shadows – not lifting a finger to help.  This would leave the Democratic Party without a proper candidate. Then Biden can swoop in to save the day for the Democrats like some modern version of Mighty Mouse. Now you may be thinking that at this point it will be too late for Biden to be placed on the ballot in a sufficient number of states.  After all there’s laws to that affect, aren’t there?  Yes.  There are.  And like many of our laws, they can be and have been violated.  My home state of New Jersey is a perfect example.  A number of years ago, Senator Bob Torricelli was incarcerated just prior to election time.  According to the laws of the State of New Jersey, the Democratic Party had run out of time to have anyone placed on the ballot to represent them.  They brought the matter to court and in true NJ fashion, the NJ Supreme Court ruled that even though it was unconstitutional, that the Democratic Party was entitled to have someone on the ballot.  In this case, what happens in NJ won’t stay in NJ.  You can be sure that if such a situation did occur at the presidential level, the Administration would argue likewise and you can also be sure that the courts would rule likewise.

This scenario would further benefit Biden in that in all of this time the Republicans have been running against Obama’s scapegoat and not vetting Biden as he should have been.  A short campaign season for Biden would benefit him tremendously by taking the Republicans off guard and greatly limiting the amount of money he would have to spend and the time he would have to defend some of his idiotic and embarrassing statements. Plus the man would look like a Democratic hero, there only to save his beloved Party from Socialists and Republicans alike. This would be a win-win for the Obama Administration:  they would finally get rid of their competition and they would have another puppet at their beck and call in the most powerful position in the world – in essence, giving Obama a third term.

So beware, my Republican friends, scapegoats can also set traps – but only if you go running after them and let the real demons roam free.  Be prepared.  Hillary’s days are numbered.  Biden’s can be as well – just as long as you are prepared.