CAN SOMEONE FOREIGN-BORN BE A “NATURAL BORN CITIZEN” OF THE U.S.?

(Jan. 25, 2016) — At approximately 8:26 AM on Monday morning, presidential candidate Donald J. Trump tweeted that “It’s time for Ted Cruz to either settle his problem with the FACT that he was born in Canada and was a citizen of Canada, or get out of race” [sic].

Trump is the only well-known declared presidential candidate who has openly questioned the constitutional eligibility of any other candidate, notably, Sen. Ted Cruz of Texas, who was a documented citizen of Canada by virtue of his birth there in the city of Calgary, province of Alberta on December 22, 1970.

Article II, Section 1, clause 5 of the U.S. Constitution mandates that the president and commander-in-chief be a “natural born Citizen.”  Average Americans have understood the term to mean that the person must have been born in the United States and possessed U.S. citizenship all of his life as opposed to a naturalized citizen who was once a citizen of another country. However, historical research shows that in colonial times and forward, the citizenship of a child was determined by that of his father.

Trump had raised the question of Cruz’s eligibility on the day Cruz declared himself a candidate, although he did not focus on it as he quickly ascended to front-runner status in the Republican primary race, which officially begins next Monday at the Iowa caucuses.  In recent weeks, however, Trump has stressed the fact that Cruz, who is polling second in many surveys, was “born in Canada.”

Shortly before Cruz declared himself a candidate last March, two former solicitors general wrote an essay published in the Harvard Law Review which attempted to make the case that Cruz, as the son of a U.S.-citizen mother, qualifies as a “natural born Citizen” despite his birth on foreign soil to a foreign-citizen father.

On January 11, a new Congressional Research Service (CRS) memo on the topic of “natural born Citizen” was published in which legislative attorney Jack Maskell appeared to equate a “native-born” citizen with a “natural born” one.

In previous CRS memos, Maskell attempted to assure his audience, which is primarily members of Congress, that both Arizona Senator John McCain and Barack Hussein Obama, who currently occupies the White House, are eligible for the office. McCain was born in Panama to two U.S.-citizen parents, one of whom was serving as an admiral in the U.S. Navy at the time.

Obama claims eligibility by his alleged birth on U.S. soil to a U.S.-citizen mother. However, he shares in common with Cruz a foreign-born and foreign-citizen father at the time of his birth.

Trump has not addressed the questions over Cruz’s father’s status, but rather, focused on the out-of-country birth.

The following year, he publicly demanded that Obama released his “long-form” birth certificate proving the claim that he was born in Hawaii, which would presumably assure Americans that he is eligible to hold the office of president. On April 27, 2011, the White House released what it said was a scan of a certified copy of Obama’s original birth certificate held by the Hawaii Department of Health. However, almost immediately, the image was declared fraudulent by various graphics experts.

Trump claimed credit for the release of the image and said that some of “his people” would be scrutinizing it to determine its authenticity. Trump has not disclosed any findings or conclusions reached by a team he reportedly dispatched to Hawaii to study the issue; however, in September 2011 the Maricopa County Cold Case Posse began a criminal investigation into the image, declaring it fraudulent at a press conference on March 1, 2012.

Various commentators and political figures appear unaffected by the question Trump and others have raised about Cruz’s constitutional eligibility, as former Texas Governor Rick Perry endorsed Cruz on Monday morning. Last week, radio host and commentator Glenn Beck announced that he was endorsing Cruz’s candidacy.  L. Brent Bozell III, president of the Media Research Center, has also endorsed Cruz while making the case, along with 21 other “conservative” “leaders” writing at National Review Online (NRO), that Trump is not a true “conservative.” 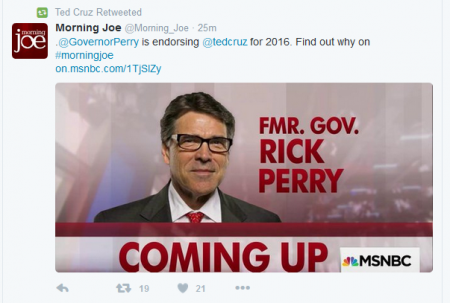 Several ballot challenges and at least two lawsuits have been filed claiming that Cruz is ineligible to seek the presidency because he is not a “natural born Citizen.”  On Saturday, Trump hinted that he, too, could file suit because as a candidate for the same office, he has “standing.”

In a case brought by Atty. Orly Taitz of California, the Ninth Circuit Court of Appeals ruled in 2013 that a presidential candidate eligibility could be challenged by another candidate during the primary season.

On Sunday evening, JB Williams of the North American Law Center (NALC), although not an attorney, stated on his weekly radio broadcast that NALC is in possession of a sworn affidavit from a 2012 Cruz interviewer stating that a “natural born Citizen” is one who was born in the United States to two U.S.-citizen parents, effectively admitting his own ineligibility at the time.

Later on Monday morning, Trump tweeted the results of a poll which show him at 41% support among 582 “Republican respondents”: 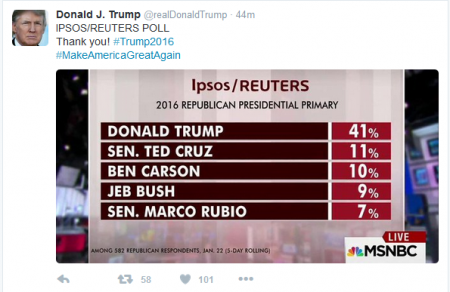 Democrat presidential candidate Cody Robert Judy has questioned the eligibility of Obama, Cruz, Rubio, McCain and others since 2008 in several lawsuits, two of which were refused a hearing by the U.S. Supreme Court.