LOCAL IMPEACHMENT MEASURES “ON THE MOVE” 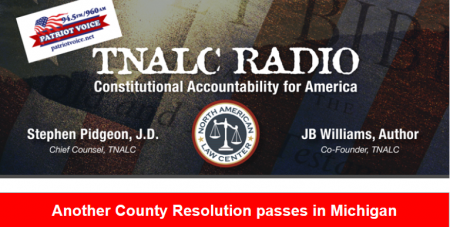 Since the RNC blocked the national Resolution on Impeachment at their Winter meeting in Charleston, County and District level initiatives are on the move…

This past week, the Gratiot County Republican Party in Michigan passed the TNALC Resolution on Impeachment by unanimous consent of the County Committee.This week, the 7th District in Michigan is set to pass the first district level Resolution supporting TNALC Articles of Impeachment, and how fitting… as the 7th District includes Jackson County, the “birth place of the Republican Party.”

TONIGHT ON TNALC RADIO, we will speak with Yvette Franco-Clark, the current Chair of the Gratiot County Republican Party and in the second hour, we will speak with Timothy Harrington, lead investigator at TNALC overseeing the investigation into numerous cases, focusing tonight on the multiple ballot challenges to Ted Cruz and Marco Rubio over “natural born Citizen” requirements.

All shows are also available on-demand via podcast HERE

And, if you want to listen LIVE on your mobile device or tablet, download the Tunein app for your device and search for WYPV Patriot Voice.

We need sponsors and advertisers for the TNALC weekly radio show…. as well as your ongoing support for the many solutions for America being worked at The North American Law Center, Patriots Union and Veteran Defenders of America.

The 2008 election cycle forced the nation to focus on a simple three word term it had not focused upon in decades…. “natural born Citizen.”

In the 2016 election cycle, the Republican Party is now running at least two candidates who are being challenged in multiple states, on the basis of their “ineligibility for office” under Article II “natural born Citizen” requirements, Sen. Ted Cruz of Texas and Sen. Marco Rubio if Florida.

The number of state ballot challenges is growing by the day. Suits have been filed in Texas and other places and Tennessee has introduced a legislative effort to block the nomination or election of anyone who is not a proven “natural born Citizen” of the United States.

Last week, JB Williams did an hour-long TV interview with conservative writer Cliff Kincaid and a half-hour segment with Carl Gallups on Freedom Friday, all of it focused on Impeachment of the most impeachable administration in US history and the issue of “natural born Citizen” in the 2016 election.

TNALC has responded numerous times to Mark Levin’s “open challenge” to debate the NBC issue on his show, but the Levin Show has never responded to our many offers to openly debate the matter on Mark’s show.  Numerous “Ive League Law Professors” have now gone public with their opinions that Ted Cruz is “not eligible” for the Oval Office. One way or another, 2016 is the election cycle in which the “natural born Citizen” issue will be resolved…

It is our hope and agenda to make sure it is resolved in the best interest of our country, and not for the mere political ambitions of only a few who have chosen to mislead well-intended patriots on what is likely the most important issue in the 2016 election cycle.