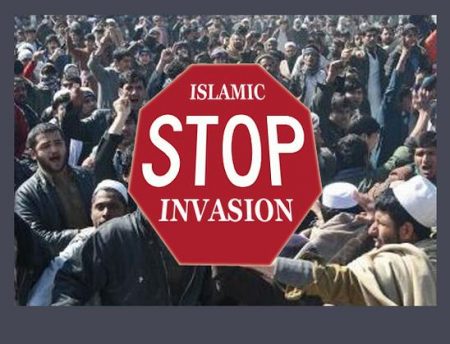 (Jan. 21, 2016) — During the Republican Presidential Debates much has been made about Donald Trump’s policy regarding his proposed moratorium on Muslim immigration.  However, even the Trumpster has failed to adequately explain the virtue of this particular policy, and the misguided argument of his opponents that such a policy will alienate the Muslim countries that we need to align with us to fight ISIS.  Trump and those who partially agree with him have argued that the safety of the American people should be their primary responsibility, and that current methods of vetting immigrants are not credible.  But even those that agree to this extent argue that such a blanket moratorium will alienate our Muslim friends, which we cannot afford to do – and ultimately, this will make us more unsafe than we presently are. Are they kidding?  Seriously!!!

Here’s where Trump’s opponents on this issue demonstrate a woeful ignorance of reality.  First, Trump proposed that the moratorium be enacted until we can figure out a way to properly vet the immigrants*.  It is reasonable to want to place a moratorium on something dangerous at least until we can remove the danger. But that explanation only represents a minute defense of his proposal.  The Muslims that he does not want to have free access to our land are terrorists – not only to Americans but to other Muslim nations. So right now the Muslim terrorists who live in these countries want to kill us as well as the other Muslims living in the countries in question.  Perhaps if Trump gets his way and a moratorium is imposed, they will want to kill us two times over instead of once over.  Either way, if we don’t do something to stop them, we’re dead – and so are our potential allies.  What these countries understand that Trump’s opponents don’t understand is that ISIS intends to re-establish a Caliphate, one where they rule over all of our potential Muslim ally countries – like Saudi Arabia, Jordan, Egypt, and Turkey, just to name a few.  Should this happen, the aforementioned countries lose their autonomy to the Caliphate.

Therein lies the key to what should be Trump’s primary defense of his proposal.  In my not-so-humble opinion, the Muslim countries in question are rightfully just as concerned about ISIS as those of here in the good ole USA.  And that concern makes them our potential allies, not our immigration policies.  It is also that concern that I believe would make them sympathetic to a moratorium on Muslim immigration, at least until we can separate the good guys from the bad guys.  And should that sympathy fail to materialize, it is likely that they would still be allies since their concern for their own safety would trump (pun intended) any thin-skinned reaction to an unintended and unjustified insult.  Do the candidates really believe that Muslim countries would alienate our efforts to create an alliance that is to their benefit because we closed our borders?  It would seem to me that those who hold to this argument are politically-correct-minded rather than practical, and perhaps – just perhaps – they are living in the same LaLa land wherein the man now occupying the White House resides.  And LaLa land, my friends, should be the Island where Misfit Politicians should be sent to govern.

This may seem to be just a slight difference until we look at those words more closely.  When you do, you will see the difference. It is actually quite profound.