“THE DEATH OF OUR MILITARY”

(Jan. 21, 2016) — “Good evening, ladies and gentlemen, and welcome to the ‘Pulse of the Nation,’ a show that isn’t afraid of the truth, like reporting Obama’s stolen Social Security number that Loretta Lynch has refused to investigate; dissimulate and prosecate (is that a word?).

“Bear with me for a moment while our cameraman plays ‘Taps’ to honor the death of the United States Marine Corps, thanks to the totally inept Commander-in-Chief for changing a ‘Force of Nature’ to being a, well, nothing like it used to be.

“Combat is stressful enough without adding political correctness to the mix. In a former life I was volunteered for a ‘humanitarian’ mission in which I found myself and my squad of like-minded vagabonds fighting against insurmountable odds, coming out on top only due to a total disregard of any semblance of whatever makes us human.

“Crawling on our stomachs for a klick in the dead of night to sneak up on the enemy to slit the sentries’ throats and then to kill every living thing in their camp was a perfectly-executed plan. There were cuts and scrapes, but when the sun rose so did we, but not one of the bad guys. Remember that movie where our guys came upon a little boy goat-herder and they let him walk away? Let me put it to you this way: I was in charge and we did what had to be done and we walked away.

“Here we take a break to listen to a song that fits the bill about now: ‘Oh Happy Day.’

“No doubt the Navy will be next on the chopping block, with nothing but Muslims on a boomer. What the heck, let’s listen to a farewell song to the Navy: Theme for Victory at Sea.

“And let’s hear it from our Army: The Army Goes Rolling Along.

“So I’m making a point: we’re seeing the destruction of our military right before our eyes. We have this ‘Don’t tell’ and same-sex ‘marriage’ nonsense to women in our elite fighting groups. Let me tell you something: back in the day, back when citizen soldiers were wearing the uniform, back in the Vietnam era, every group of American soldiers and sailors were elite. Today, not so.

“Sorry, guys and gals of today’s American military, but where were you when LTC Terry Lakin was railroaded in one of your Courts-Martial? Where were the Joint Chiefs of Staff while Lakin’s Constitutional rights were not only violated, but also circumvented to the point where Lakin was not allowed to present a defense OF ANY KIND? WHERE WERE YOU?

“I’m sure to get a lot a flack about failing to have funny interviews with the guy and gal on the street tonight, but something really stinks in Denmark: the death of our military. 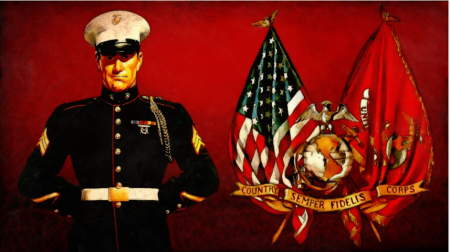 “Thanks to the music, we’re out of time but we must play another fare-thee-well to our Marines: the Marines’ Hymn.

“Well, that’s it. Actually, all I wanted to do was to remind everyone that we need a strong Commander-in-Chief, or we might as well stop complaining.

“Look, if the other people on the GOP ticket really love America — as they say they do — then the best way to prove it would be get on Trump’s bandwagon. ALL OF THEM need to support Trump today; now; sooner than this time yesterday.

“We need a strong Commander who won’t take any of this political correctness nonsense. We need to save America, because if we don’t, there’ll be nothing left to save us. Think about it: do you want more of the same? More earmarks and lobbyists running the show, or do you want the Constitution governing our lives and not a bunch of whining Muslims who never should’ve gotten off the boat?

“Okay, our time’s up, so thanks for watching. I just had to support our troops because I still think there’s one chance left for America: Trump. I like the Trump-Carson ticket, but we’ll see.

“This is your Roving Reporter, on behalf of my crew, saying goodnight: Goodnight.”

“Sorry about that: I just got carried away, but it really ticks me off what Obama is trying to do to our military. If I were on the Chiefs of Staff I’d give one heck of a press conference; have my own company of Marines march into the White House and out again and march Obama into a cell down in Gitmo. It’s called justice; it’s called payback; it’s called retribution for giving the Stand-Down order for our guys trapped in Benghazi; it’s called ‘Truth, Justice and the American Way.’ Let’s get ourselves some all-American burgers, fries and a malt. My treat.”