“TODAY” VS. “THE PRESIDENCY” 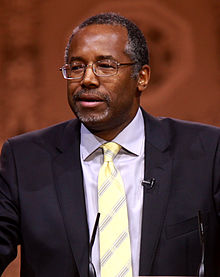 (Jan. 19, 2016) — On Tuesday afternoon, presidential candidate Dr. Ben Carson issued a brief press release stating that he “has cancelled all remaining campaign events today and will be traveling to Omaha” after he was informed that three volunteers and a paid employee were involved in a serious car accident in Iowa, with one transported to a trauma center in Omaha, NE.

ABC News Channel 4 in Charleston, SC then reported that “After appearing in Myrtle Beach and Columbia, Presidential candidate Ben Carson returned to the Holy City Tuesday and announced he was temporarily suspending his run for the presidency.”

Carson did not say that he was “suspending his run for the presidency,” but rather, that he had “cancelled all remaining campaign events today.”

Carson’s statement says that “One volunteer is being transported to the trauma center at the University of Nebraska Medical Center in Omaha, Nebraska,” while ABC News reported that the seriously-injured person is a “staffer.”  However, ABC differentiated between volunteers and the term “staff member.”

The Post & Email wishes to extend its best wishes to all who have been affected by the accident.

Update, 8:14 p.m.:  Dr. Carson has expressed condolences to the family of Braden Joplin along with a photo of the two on Twitter.