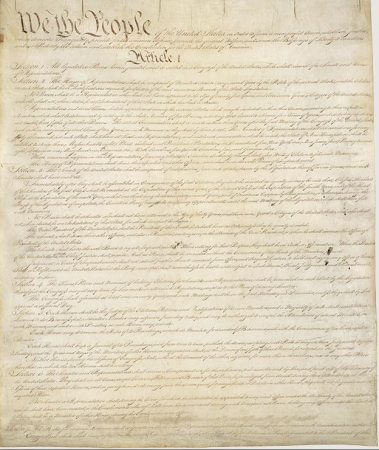 (Jan. 17, 2016) — [As is the case with the previous “news announcement” written by this author, the following is fictional, although based on events which have occurred and could yet occur.]

Republican voters are turning their anger on Republic leadership and the GOP nominee who ignored warnings and 2012-13 court rulings.   As one voter stated emphatically, “They thought they could ignore the Constitution.  They wouldn’t listen to warnings that the Democrats would weaponize the issue.  They thought that historical evidence and court rulings, some as recent as 2012 and 2013, didn’t apply to them.”

With just days to the election, the Supreme Court upheld the natural law definition of a Natural Born Citizen, thus invalidating the Republican nominee.  And the Court’s ruling made a particular point of the 2012-13 rulings as well as others.

As U.S. District Judge Emmet Sullivan noted in his 2012 ruling:

In July 2011, Hassan requested an advisory opinion from the FEC concerning the application of the Presidential Primary Matching Payment Account Act, 26 U.S.C. §§ 9031-9042 (“Matching Payment Act”), to Hassan’s presidential campaign. On September 2, 2011, the FEC issued its response, in which it stated that Hassan is not eligible to receive matching funds under the Matching Payment Act because he is not a natural born citizen. This ruling did not address the Fund Act, but according to Plaintiff, the logic and reasoning of the FEC’s opinion would lead to the conclusion that Hassan similarly is ineligible to receive funds under the Fund Act. […]

For this reason, the challenge presented here differs from Hassan’s other lawsuits, which challenge a number of states and state authorities for not permitting Hassan to be listed on the election ballot. […]

Plaintiff has not pointed to any such manifest intent or irreconcilable conflict, and therefore he has not carried the high burden necessary to demonstrate that the natural born citizen requirement has been implicitly repealed. Moreover, the Supreme Court has consistently held that the distinction between natural born citizens and naturalized citizens in the context of Presidential eligibility remains valid. See Schneider v. Rusk, 377 U.S. 163, 165 (1964) (“The only difference drawn by the Constitution is that only the ‘natural born’ citizen is eligible to be President.”); see also Knauer v. United States, 328 U.S.654, 658 (1946) (same); Baumgartner v. United States, 322 U.S.665, 673-674 (1944) (same).

Plaintiff essentially asks this Court to declare that a provision of the Constitution is itself unconstitutional. It is beyond this Court’s authority to do so. “[T]his Court lacks the power to grant the relief sought because the Court, as interpreter and enforcer of the words of the Constitution, is not empowered to strike the document’s text on the basis that it is offensive to itself or is in some way internally inconsistent.”

Because the natural born citizen requirement has not been explicitly or implicitly repealed, Hassan’s challenge to that provision, and the Fund Act’s incorporation thereof, must fail…

In 2013 a three-judge panel affirmed the above ruling that the Article II requirement was not repealed.

United States Court of Appeals for the District of Columbia Circuit 2013 ruling:

To the extent appellant maintains that Article II, Section I, clause 5 of the United States Constitution has been implicitly repealed to the extent it bars naturalized citizens such as himself from holding the office of President, appellant failed to state a claim for relief. Appellant cites no authority to support his contention that a constitutional provision can be implicitly repealed, nor has he shown the natural-born citizen requirement is in irreconcilable conflict with the Fifth and Fourteenth Amendments, or that those amendments “cover [ ] the whole subject” of the requirement and are “clearly intended as a substitute.” […] USCA.

Asked if he had additional comment, the angry voter mentioned earlier shook his head and stated, “They’re not going to like how history records them and their epic fiasco.”