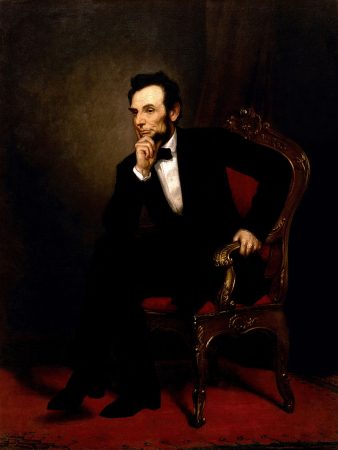 (Jan. 12, 2016) — (Author’s note: A question that has not been addressed but should be is this: had 7 Southern states not seceded in late 1860 and early 1861 and brought about the threat of economic chaos in the North, a North that was so dependent on the South for its tax base; a move which forced Abraham Lincoln to initiate and support an amendment to the Constitution (Corwin amendment) which would have taken the issue of slavery out of the hands of the Congress and made it perpetual, exactly when would slavery have been abolished in America?)

“I have no purpose, directly or indirectly, to interfere with the institution of slavery in the States where it exists. I believe I have no lawful right to do so, and I have no inclination to do so.” Abraham Lincoln, First Inaugural Address, March 4, 1861. (Emphasis added)

When Abraham Lincoln took office in March of 1861, this country had observed the institution of chattel slavery for its entire existence. President Lincoln, having secured not one electoral vote from the Southern States, declared in his First Inaugural Address that it was his full intention to use the power of the presidency to perpetuate and protect that onerous institution “in the states where it exists.”

Certainly not taught in our government schools is the fact that two days before Lincoln took the Oath of Office of President, a proposed amendment to the Constitution referred to as the Corwin Amendment passed both houses of Congress and was being sent to the states for ratification. Lincoln spoke of his support for this amendment in his Inaugural address on March 4.

“I understand a proposed amendment to the Constitution—which amendment, however, I have not seen—has passed Congress, to the effect that the Federal Government shall never interfere with the domestic institutions of the States, including that of persons held to service. To avoid misconstruction of what I have said, I depart from my purpose not to speak of particular amendments so far as to say that, holding such a provision to now be implied constitutional law, I have no objection to its being made express and irrevocable.” (Emphasis added)

History shows that Lincoln was not being truthful when he stated he had not seen the proposed amendment which had passed both houses of Congress. Author Doris Kearns-Goodwin in her “political biography” of Abraham Lincoln titled Team of Rivals states the following on page 296:

“He [Lincoln] instructed Seward to introduce these proposals in the Senate Committee of Thirteen without indicating they issued from Springfield. The first resolved that ‘the Constitution should never be altered so as to authorize Congress to abolish or interfere with slavery in the states.’ Another recommendation that he instructed Seward to get through Congress was that ‘all state personal liberty laws in opposition to the Fugitive Slave Law be repealed.”

Dr. Thomas DiLorenzo, author of The Real Lincoln and Lincoln Unmasked, declared that Lincoln not only was aware of the proposed amendment but was in fact its author. Below is the text of that amendment which was authored/endorsed by Lincoln, passed by both houses of congress and sent personally to the governor of each state by Lincoln himself which was discovered in 2006 in a museum in Allentown, PA.  This critical piece of history is available in the records of the U.S. House of Representatives, 106th Congress, 2nd Session, The Constitution of the United States of America, Doc. No. 106-214.

“No amendment shall be made to the Constitution which will authorize or give to Congress the power to abolish or interfere, within any State, with the domestic institutions thereof, including that of persons held to labor or service by the laws of said State.”

Prior to Lincoln’s military invasion of the South, Lincoln had done everything within his power to make chattel slavery perpetual throughout the entire country. He had also instructed his Secretary of State William H. Seward to work on federal legislation that would outlaw any attempts to nullify the Fugitive Slave law. Several states in the North had passed laws to prohibit the federally mandated return of fugitive slaves. Lincoln wanted a federal law that would counter such legislation by the states.

Lincoln was more than willing to make the enslavement of the black race perpetual if it would preserve the union.

Looked upon by an intelligent eye rather than an emotional one, Lincoln’s Emancipation Proclamation which he issued twice must be seen as simply another political maneuver to preserve/restore the union.

“If I could save the Union without freeing any slave, I would do it; and if I could save it by freeing all the slaves, I would do it. …What I do about Slavery and the colored race, I do because I believe it helps to save this Union.” ~Lincoln in an open letter to Horace Greeley, which appeared in the New York Tribune on August 22, 1862.

Here, again, in his own words, Lincoln states that Slavery was not his primary interest. Lincoln’s primary goal was the preservation of the Union which would protect the interests of the Socialists in his cabinet and armed forces and who were the founders of the Republican Party. It would also insure the flow of tariff dollars into the government’s coffers, the majority of which came from the Southern states.

The now grossly misunderstood and misrepresented Emancipation Proclamation was political BS, plain and simple. The edict freed only the slaves in the states in which Lincoln had no control. It did not free any of the slaves that were currently under the control of the Union Army in occupied territory in any of the Southern states. The questions must be asked: if the Union forces had not achieved what Lincoln considered to be a victory at Antietam, would he have issued the proclamation? If the Army of Virginia had won a demonstrative victory at Antietam, when would Lincoln have issued such a proclamation, if ever?

In Lincoln’s own words to Greeley, he stated he would willingly continue slavery if it would lead to the preservation of the Union. Prior to the beginning of the war, Lincoln wrote and endorsed a proposed amendment to the Constitution which would have prohibited Congress from ever abolishing or interfering with the institution of slavery. In addition, he ordered the effort be made to create a federal law that would nullify any state law that prohibited the return of fugitive slaves. The fact this same man is now referred to as the “Great Emancipator” is a great illustration of the gullibility and ignorance of the great masses in our country. Adolph Hitler had the misfortune of coming to power in the wrong country.

Still, the most important question that could be asked is this; If the Southern states had not seceded; if the Union had been preserved without a war; at what point in the history of this country would a new constitutional amendment have been proposed and passed that would have freed the slaves?

Simply stated, if the South had not seceded and defended themselves from the invasion of Union forces, slavery would have been extended in our country indefinitely; the Corwin Amendment guaranteed that. It was the threat of a break-up of the Union and not any act by Abraham Lincoln and his socialist cronies that led to emancipation.

The credit for emancipation should be given to those who challenged and fought against Lincoln, not to the president who “destroyed the Constitution in order to preserve it.”* Lincoln’s actions and a war that killed almost a million Americans; a war to insure a country indivisible, were praised by Karl Marx and Adolph Hitler—need I say more?

“Lincoln used war to destroy the U.S. Constitution in order to establish a powerful central government…” This is certainly a strong statement, but in fact Lincoln illegally suspended the writ of habeas corpus; launched a military invasion without consent of Congress; blockaded Southern ports without declaring war; imprisoned without warrant or trial some 13,000 Northern citizens who opposed his policies; arrested dozens of newspaper editors and owners and, in some cases, had federal soldiers destroy their printing presses; censored all telegraph communication; nationalized the railroads; created three new states (Kansas, Nevada, and West Virginia) without the formal consent of the citizens of those states, an act that Lincoln’s own attorney general thought was unconstitutional; ordered Federal troops to interfere with Northern elections; deported a member of Congress from Ohio after he criticized Lincoln’s unconstitutional behavior; confiscated private property; confiscated firearms in violation of the Second Amendment; and eviscerated the Ninth and Tenth Amendments.”

*Lincoln unconstitutionally suspended the writ of Habeas Corpus and had the military arrest tens of thousands of Northern political opponents, including dozens of newspaper editors and owners. Some 300 newspapers were shut down and all telegraph communication was censored. Northern elections were rigged; Democratic voters were intimidated by federal soldiers; hundreds of New York City draft protesters were gunned down by federal troops; West Virginia was unconstitutionally carved out of Virginia; and the most outspoken member of the Democratic Party opposition, Congressman Clinton L Vallandigham of Ohio, was deported. Duly elected members of the Maryland legislature were imprisoned, as was the mayor of Baltimore and Congressman Henry May. The border states were systematically disarmed in violation of the Second Amendment and private property was confiscated. Lincoln’s apologists say he had “to destroy the Constitution in order to save it.” Thomas DiLorenzo, The Lincoln Myth

Should Secession Be Given Credit for Ending Chattel Slavery in America? added on Tuesday, January 12, 2016