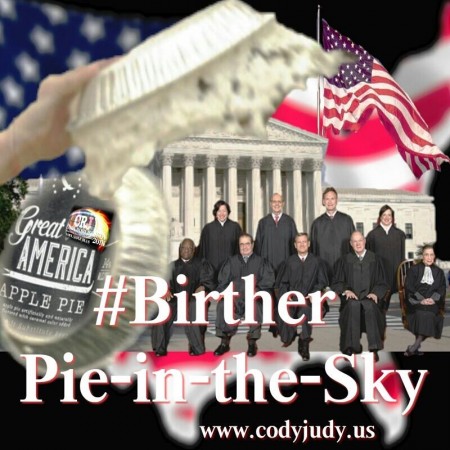 (Jan. 9, 2016) — Over the last few days America has been thrust into the Birther World yet again with lead Polling Republican Presidential Candidate Donald Trump, who seems the perfect anti-establishment Porcupine – touch him and you will get a quill shot into you – attacking Presidential Candidate and U.S. Senator Ted Cruz on questions of his eligibility, or Constitutional authority to assume the Office of President should he be elected to it.

No documentation has provided proof that Cruz’s mother was not a Canadian Citizen at the time of Cruz’s Birth. New Treasures by Googling BIRTHER have over the last few days proven worth its weight in Gold.

U.S. Senator John McCain opined the issue with Cruz was a legitimate concern and not illegitimate to look into. U.S. Representative Nancy Pelosi chimed in the [natural born Citizen] qualification was an open door in the consideration of Ted Cruz. The White House Press Secretary Josh Earnest weighed in that he didn’t know if Obama was taking a side on the issue but he was enjoying it after Obama’s grief about being born in Kenya.

The common thread between Obama and Cruz of course is that of the disqualifying factor that both do not have fathers who were [Citizen] of the U.S. at the time of their birth. The dissimilarity is Obama claims he was born in Hawaii and Cruz birth is affirmed in Canada. Of course Obama provided a long form birth Certificate in 2011 after Mr. Trump took credit of picking Obama’s own quill out of him but it only confirmed Obama was not [Born in the U.S. to Citizen Parents] the definition of [natural born Citizen] the U.S. Supreme Court affirmed in Minor v. Happersett was never in doubt. Mr. Judy’s appeal dealt with the lower Courts in contradiction with the precedent case.

Despite the Main Stream Media’s ploy that the Principle Definition has been settled, the fact remains McCain and Pelosi have got it right on this – it’s unsettled by the U.S. Supreme Court with two Presidential Candidates at odds against each other, both standing to lose a great deal based on the Principle definition observed in the Constitution Requirement.

The U.S. Supreme Court just two months ago DENIED a Motion for Forma Pauperis by a Presidential Candidate, Cody Robert Judy, the only Candidate for President in America with a bi-partisan Federal Court Record appealing the principle on first McCain in 2008 and respectfully Obama in 2012 Case No. 12-5276 and ’13 as well as 2014 Judy v. Obama 14-9396.

In a YouTube Video released today by Cody Robert Judy’s Campaign, CRJ Today for a Better America Tomorrow, Cody rehearses the ‘bad behavior’ displayed by the U.S. Supreme Court in denying his Motion for Forma Pauperis as a excuse not to hear his Writ of Certiorari based on:

Mr. Judy rehearses the massive amount of money expended in the Main Stream Media on the eligibility question now in Ted Cruz’s behalf and contrast that, if the U.S. Supreme Court handled the definition of [natural born Citizen] virtually every Main Stream Media (MSM) outlet has reported as speculation in over 50 pages of MSM Reports googled under Birther and Natural Born Citizen, that America would be better served rather than received pie-in-the-eye by the Court’s silence.