(Dec. 18, 2015) — On December 10, two-term Connecticut Gov. Dannel P. Malloy announced his intention to sign an executive order which would prohibit anyone on a federal “watch list” from obtaining or retaining a pistol permit or firearm within the Constitution State.

The executive order is dependent on “federal approval” and Malloy’s ability to obtain access to federal watch lists.

On December 6, Obama addressed the nation for just the third time since he took office in 2009 in the aftermath of a deadly attack in California by an Islamic couple not reported to have been on a “watch list” but who at some point became “radicalized,” during which Obama stated that individuals on the federal “no-fly list” should be banned from obtaining guns.

The White House was slow to state that the attack was an act of terror rather than “workplace violence” or some other cause and might have pressured the FBI to “downplay the terrorist angle of San Bernardino.”

“The Governor is working directly with federal officials to use government watch lists for this purpose and, upon approval, will sign the executive order. He urged the U.S. Congress and other states to take action with similar commonsense steps. The Governor will work with the federal government to determine the specific lists – be it the ‘no-fly’ list, terrorism watchlist, or some combination – used in this regard,” Malloy declared in his December 10 press release.

Connecticut has some of the most restrictive gun laws in the nation, made more so in the wake of the December 14, 2012 murder of 20 children and six educators at the Sandy Hook Elementary School in Newtown.

Following the atrocity, Malloy expressed doubts that Congress would enact legislation banning “high-capacity magazines and universal background checks” which he advocated.  In April 2013, Malloy signed legislation limiting magazines to ten clips and expanding the definition of “assault weapons,” which must now be registered, to include in excess of 100 different firearms.

As of February 2014, then-Connecticut State Police spokesman Paul Vance said that thousands had ignored the new law’s requirement to “register all military-style rifles with state police by Dec. 31.”

National “watch lists” were first assembled following a presidential directive issued in September 2003 by President George W. Bush in response to the terrorist attacks of September 11, 2001.  The directive begins: 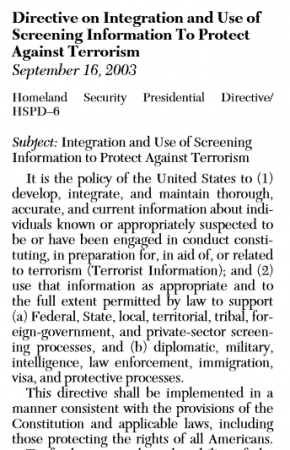 Following Malloy’s announcement, Scott Wilson, president of CCDL, a Connecticut Second-Amendment group, expressed concerns about the proposed executive order violating the rights of persons not convicted of a crime, as did legislative Republicans and the Connecticut ACLU.  Gun-control advocates and legislative Democrats praised the proposal.

On December 11, the Journal-Inquirer reported that “Some lawmakers questioned how easily people could contest their inclusion on a watch list and remove themselves from it. There also were questions about whether the federal government would share the information with state officials, as well as whether Malloy has the authority to impose his order.”

On Monday morning, The Post & Email contacted Malloy’s press office to request information on how a resident of Connecticut who is also a pistol permit holder would discover whether or not he or she is on a watch list.  We received no response.

On Thursday, we contacted a FOIA officer in Malloy’s administration to request “copies of all documents Gov. Malloy’s office has produced to federal authorities in an effort to obtain copies of terror watch lists.”  On November 24, the same FOIA officer, who is also Associate General Counsel, acknowledged our request for documents relating to the number of Syrian and other Middle Eastern refugees resettled in Connecticut since January 1, 2011 and “documents on the number of illegal aliens present in Hartford, Bridgeport, New Haven and the state as a whole if they are available.”

We have not yet received any documents, although the Connecticut FOIA law is vague as to a time frame during which records must be released.

“The Terrorist Screening Center does not publicly confirm nor deny whether any individual maybe included in the U.S. Government’s Terrorist Screening Database (TSDB) or a subset list. Disclosure of an individual’s inclusion or non-inclusion in the TSDB or on the No Fly List would significantly impair the government’s ability to investigate and counteract terrorism, and protect transportation security.”

Mr. Joly was not able to elucidate as to whether or not a state governor could obtain access to terror watch lists.  However, he referred us to a PDF document on the TSC website responding to “frequently asked questions.”  The question “WHICH AGENCIES IN THE UNITED STATES HAVE ACCESS TO THE INFORMATION IN THE TERRORIST SCREENING DATABASE?” is answered with:

Agencies and officials who are authorized to conduct terrorist screening in the course of their official duties have access to the information contained in the Terrorist Screening Database to support diplomatic, military, intelligence, law enforcement, immigration, visa, and protective processes. The five major U.S. Government agencies that screen with information from the Terrorist Screening Database are: the Department of State’s consular officers for passport and visa screening; the Transportation Security Administration for aviation security screening (No Fly and Selectee Lists); the FBI’s National Crime and Information Center for domestic law enforcement screening; the U.S. Customs and Border Protection for border and port of entry screening, and the Department of Defense for base access screening. All screening functions are subject to U.S. laws and regulations protecting privacy and civil liberties.

Malloy has met with Obama in Washington at least twice this year.  He is a member of the Democratic Governors Association and will be chairing the organization next year.  Obama campaigned for Malloy in 2014, a race he won narrowly for the second time over Greenwich businessman Tom Foley.

The state of New Jersey, which also has strict firearms laws, has a statute in place signed by Gov. Chris Christie in 2013 which requires that an additional database, the NCIC, be checked before issuing a pistol permit.  The NCIC contains information from 21 categories, among which are stolen items, missing persons, gang members, “immigration violator,” and “Known or Appropriately Suspected Terrorist; Wanted Person.”

Subsets of those categories are listed here.  The NCIC does not contain the names from the federal “watch lists.”

On December 10, Malloy claimed that Connecticut was “seizing this moment,” referring to the December 2 mass killing in San Bernardino, CA which was carried out by Islamic jihadists whose names were not reported to have been on a watch list.  The wife of the jihadi couple, Tashfeen Malik, was reportedly screened and approved for entrance into the U.S. on a “fiancee visa,” but her posts on social media made under an alias pledging allegiance to the terror group ISIS were reportedly overlooked.

According to a December 8 ABC7 News report, “Malik was one of 519 Pakistanis approved to come to the U.S. to marry a U.S. citizen last year.  State Department records show that, of the more than 9.9 million visas issued in fiscal year 2014, about 36,000 were fiance visas.”

Malloy has derided “Republicans” who oppose the entry to their states of Syrian and other Middle Eastern “refugees” who they perceive might pose a threat to their citizens. ISIS has announced its intentions to infiltrate “refugee” populations which eventually are resettled in other countries, including the U.S.

Last month, Malloy personally met with a Syrian refugee family of three to whom he extended a home in New Haven after Indiana Gov. Mike Pence refused entry to all Middle Eastern refugees until he receives assurance from federal authorities that thorough vetting can be accomplished.

Malloy has called Pence “a bigot.”

FBI Director James Comey III has stated that “there are gaps” in the data available to screen refugees for entry into the U.S., and Obama’s Homeland Security Secretary Jeh Johnson has confirmed ISIS’s plans to infiltrate refugee groups.  Subsequent reports have revealed that ISIS has been producing fraudulent passports since June 2014 to Syrians.

At least one of the terrorists who killed 130 people and wounded dozens more in Paris, France on November 13 to which Malloy referred while unveiling his executive order proposal was a member of ISIS who posed as a Syrian refugee to gain entry to the country.

Obama has accused his political opponents and critics of “making stuff up.”  “You can’t just make stuff up.  That’s one thing you learn as president of the United States. You get called in to account,” Obama said of then-presidential challenger Mitt Romney.

In April 2014, The Washington Post reported that four Muslim men who discovered they were on the “no-fly list” while trying to board an airplane filed a lawsuit alleging that the “FBI is using no-fly list to force Muslims to become informants.”

The Connecticut Post erroneously stated on December 10 that Malloy’s proposal had been enacted.  The paper additionally reported, “Malloy said that he’s been working closely with officials in the White House on the issue and hopes to soon have a list of names of those who could be excluded in Connecticut.”

The weapons used by the Islamic couple in San Bernardino were not purchased legally.

In November 2012, Malloy, then-Attorney General Eric Holder, and other officials launched a program to combat gun violence in Hartford, New Haven and Bridgeport, the first two of which are “sanctuary cities” for illegal aliens.  In a June 2014 interview, retired Border Patrol agent George Taylor, who heads the National Association of Former Border Patrol Officers (NAFBPO), told The Post & Email that “those supporting driver’s licenses [and] sanctuary for illegal aliens” are facilitators of drug smuggling.

Was Connecticut’s Governor Just “Making Stuff Up” About Denying Firearms to Those on Watch Lists? added on Friday, December 18, 2015