CAN A PETITIONER FOR “REDRESS OF GRIEVANCES” BE TRIED AND CONVICTED OF EXTORTION?

(Dec. 11, 2015) — Knoxville attorney Van Irion has filed an appeal in the case of State of Tennessee v. Walter Francis Fitzpatrick III to the Tennessee Supreme Court.

Fitzpatrick was convicted of “aggravated perjury” and “extortion” in June of last year and sentenced to three years in state prison on August 19, 2014 by Senior Judge Jon Kerry Blackwood.

Fitzpatrick moved to Tennessee in 2007 to assist a U.S. Army soldier during his court-martial.  In 1990, Fitzpatrick was himself court-martialed in proceedings in which “ghost witnesses” testified and the forgery of his signature has been maintained as authentic by the U.S. Navy for more than a quarter-century.

Fitzpatrick made his new home in Madisonville, in Monroe County, which is in the southeastern corner of the state and part of the Tenth Judicial District.

In late summer 2009, Fitzpatrick filed a petition with the Monroe County Circuit Court Clerk requesting a grand jury review of charges lodged against Barack Hussein Obama for treason and fraud.  Fitzpatrick wrote in his petition addressed to Obama “…I identify you as a foreign born domestic enemy.  My sworn duty, Mr. Obama, is to stand against what you stand for.  You are not my president.  You are not my commander in chief.”

Then-grand jury foreman Gary Pettway declined to present the petition to the full grand jury, after which Fitzpatrick filed a complaint against Pettway for obstruction.

During the course of his efforts to appear before the grand jury, Fitzpatrick discovered that Pettway had been serving as foreman for at least 20 years, which was later confirmed to be 28 consecutive years.  No appointing orders or oath of office for Pettway could be located after Fitzpatrick requested them through a Public Records request.

Fitzpatrick was also told that criminal court judges had been hand-picking grand jury foremen for as long as anyone could remember.

For months afterward, Fitzpatrick tried to raise the awareness of the local community about the illegality of a judicially-selected foreman to no avail.  On April 1, 2010, Fitzpatrick attempted a citizen’s arrest of Pettway and was consequently arrested himself at the order of a judge.

The Post & Email has reported on the multiple jailings and retaliation which Fitzpatrick experienced as a result of his recognition and publicizing of corrupt grand jury practices.  The Fifth Amendment to the Bill of Rights placed a grand-jury review of evidence between a citizen accused of an “infamous” crime and government prosecutors.

Over the years, The Post & Email has followed numerous Tennessee cases, both civil and criminal, in which corruption and violations of law have been apparent.  With a handpicked foreman, all grand jury indictments issued cannot be considered valid.

After his February 2012 release from his sixth jailing in Monroe County, Fitzpatrick moved to nearby McMinn County, also within the Tenth Judicial District.  During the relocation, and while he was still incarcerated, nearly all of his personal possessions were stolen.  Fitzpatrick also found that a large amount of cash he had saved and kept in the home he rented was gone.

The perpetrators are known, but the Madisonville Police Department refused to make an arrest.

On several occasions beginning in August 2012, Fitzpatrick attempted to file petitions with the McMinn County grand jury and provide testimony, but he was not allowed to appear.  On the last such occasion, on March 18, 2014, Fitzpatrick was arrested as he sat outside the grand jury room reading a book, awaiting a decision on his request to testify.  At the time, then-grand jury foreman Jeffrey Cunningham was serving his third term after being personally invited to “serve” by former Judge Amy Armstrong Reedy.

Cunningham is a licensed Tennessee attorney as well as CEO and president of a federally-chartered bank.

Charges leveled against Fitzpatrick by the “grand jury” that day were aggravated perjury, extortion, stalking and harassment.  Although the District Attorney General‘s office was not able to produce a detailed Bill of Particulars, a trial went forward during which Cunningham, the key “witness” in the case and allegedly the accuser, admitted that he never filed a criminal complaint.

In Tennessee, it is routine that witnesses perjure themselves; law enforcement and prosecutors do not present exculpatory evidence; investigations are cursory, if they occur at all; and the judge’s clear intent is to see the defendant convicted and incarcerated.  Several defendants, including Fitzpatrick, have described a “prisoners-for-profit” operation in which government functionaries profit while denying their fellow citizens their constitutional rights and, ultimately, their freedom.

He and other inmates have reported widespread corruption among the prison staff, including an internal “prisoners-for-profit” operation which places inmates in classes for which they do not qualify in order for the prison to be able to bill the federal government as much as $3,000 for each enrollee.

Irion appealed the conviction, a hearing for which was held in May, with an opinion issued in September upholding the decision of the trial court.  In its opinion, the appeals court ruled that grand jury members do not have to be bias-free in order to evaluate evidence against a defendant.

Last month, Irion applied to file an appeal of the case to the Tennessee Supreme Court.

The filing can be read here:  Fitzpatrick McMinn Application for TNSC Review 2.1

In his brief, Irion argued three premises on which he believes Fitzpatrick has grounds for appeal. 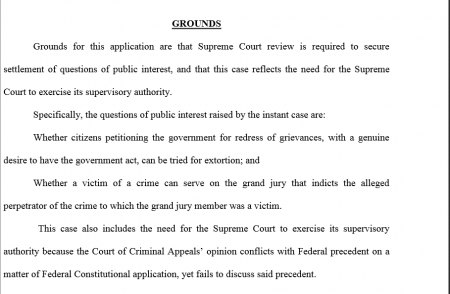 Irion also reported that Cunningham had ordered Fitzpatrick in February, “You will make no more presentments to the grand jury.”

Irion wrote that Fitzpatrick had attempted on each occasion he appeared asking to testify to the grand jury to “petition the government for redress of grievances,” as the First Amendment allows.  Citing several federal cases, Irion contended that “The Federal Courts concluded that prosecutions for extortion arising from petitions to the government would lead citizens to fear using established channels of communication with the government. Therefore, in Pendergraft the Court concluded that even intentional fabrication of evidence should not be prosecuted via the Federal extortion statute.”

“This issue was raised at every stage of the case, yet was not addressed by the Criminal Court of Appeals,” Irion wrote.

Irion presented three constitutional questions that he asked the state’s highest court to address in its “supervisory authority.”

Finally, he asked that “this Court reverse the Appellate Court’s decision, and order that Commander Fitzpatrick be immediately released from prison.”