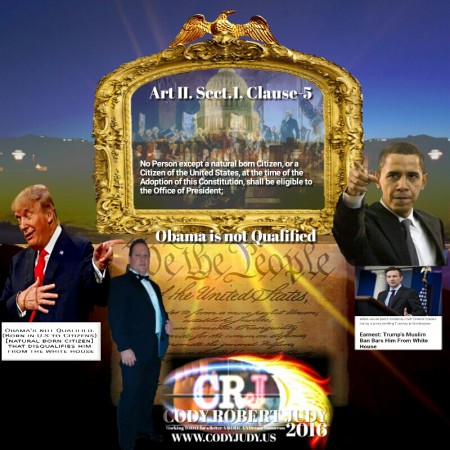 (Dec. 9, 2015) — Most Americans were shocked to hear the White House spokesman Josh Earnest pipe up that Mr. Trump’s statement about temporarily suspending Muslim Refugees from entering the U.S. until the Representatives of Congress figured out what was going on “disqualifies him from being president.“

That is just the sort of half-baked rhetoric that is concerning so many Americans, as the Constitutionally unqualified,  non- [natural born Citizen] occupier of the White House continues his usurpation of the [qualifications for the Office of President] in his fairy-tale demagoguery of the U.S. Constitution which is the Supreme Law of the Land.

Just because it is yet unchecked by Congress in Legislative Branch’s mandate in the face of eight failed attempts just since 2003 to change the [natural born Citizen] requirement and interpretation, as well purposely avoided by the Courts in the Judicial Branch in a failure to prosecute as a prosecutorial infirmity does not make it any less malignant for Americans.

While the hope has turned into “can we just get through 407 days,” America’s fourth quarter  with Barack Hussein Obama, aka Barry Soetoro, is increasingly seen as becoming a fourth stage cancer, with Terrorism becoming the new norm on the news, and the streams of  refugees increasing to 100,000 over the next year (2016) according to the Administrations leading foreign diplomat Secretary of State John Kerry and Obama’s word of  100,000 refugees each year for the next two years.

Coming from a man who claimed over and over and over again “You could keep your Doctor”, where “he says” Refugees come from is a trivial detail that America could find a little to late to do anything about. America already knows you cannot trust someone willing from the very beginning to supplant the Constitution requiring being a [Citizen at the time of the Adoption of the Constitution] or a [natural born Citizen] after the new jurisdictional generation of  pioneers of the United States Constitution was created. Natural born Citizen ie born in the U.S. to Citizen Parents was considered so elementary in understanding for a new country that it could not possibly be misinterpreted or doubted as Minor v. Happersett provided: [It was never doubted that all children born in a country of parents who were its citizens became themselves, upon their birth, citizens also. These were natives or natural-born citizens, as distinguished from aliens or foreigners. Some authorities go further and include as citizens children born within the jurisdiction without reference to the citizenship of their parents. As to this class there have been doubts, but never as to the first.][Page 88 U. S. 168 ] emphasis added.

Confirmation of the [two citizen parents] was also recently emphasized in the 2008 U.S. Sen. Resolution 511 whereupon the deduction confirmed because Sen. John McCain was born of [two] U.S. Citizens although born outside the jurisdiction of the United States, he was a natural born Citizen. Because of the legislative process of naturalization used by the Senate in authorization, this institutionalized yet another form of natural born Citizen also inclined in a naturalization process making Sen. McCain one of the first [naturalized natural born Citizens] in the history of the United States, but also breaking down or compromising the national security barrier of jurisdiction to include a non State of the Union as under the jurisdictional fold that is disrespectful of foreign borders.

This legislation was non-binding and is woefully incompatible with the deductive reasoning that two generations, completed by birth in the United States jurisdiction, to Citizen Parents, provides a natural fortress against foreigners, that would preclude aliens, nationals, immigrants, naturalized citizens, or refugees from the Office of the President. It is also disingenuous to a respect of both the adopted citizenship from mother and father as criteria of citizenship comprising a disrespect of foreign allegiance.

Indeed it is the arrogance and total disrespect of foreign land aka borders and foreign citizenship that marks the vandalism of [natural born Citizen] as born in the U.S. to Citizen Parents by many or most of the Main Stream Media. It is for all intensive purposes an invasion of foreign lands and an invasion of heritage that I regretfully am constantly apologizing for to foreign heads of state. I am constantly embarrassed and ashamed of the totality of mulish graffiti the derelicts of our Country presume as un-American vagabonds. It is difficult to have respect for those who have no respect for others and no respect for themselves.

How rogue the government has become to the agreement of the U.S. Constitution, in its simple rights, terms, principles and practices, is exemplified by the assertion that all those somehow apply to all people rather than exclusive to United States Citizens within the jurisdiction of the United States.

In the recent juxtaposition of this aforementioned the Obama Administration’s spokesmen basically inferred that ‘FREEDOM OF RELIGION’ was a right in this Country to foreigners as refugees as if they were U.S. Citizens. This is wholly contemptible as well as an aggravated burglary upon the Constitution with the implied force of the Office of the President as the executioner of the law.

Breaking Report: Prosecuting the Ambassador of Terrorism and the Qualifications for President added on Wednesday, December 9, 2015