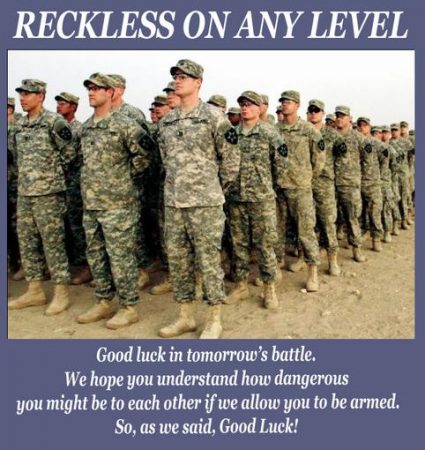 (Nov. 19, 2015) — Paris, November 13, 2015, and yet again the “peaceful” religion of Islam struck another cowardice blow to unarmed civilians in soft target areas.  This marks the second Parisian assault by this peaceful religion within the calendar year. While Paris – with reportedly the most stringent gun control laws in the world – may be an easy target for Islamic terrorists, ISIS-related sites have stated: “The American blood is best and we will take it soon.” Apparently these demons are not content to stay within their notorious 751 no-go zones in France where Sharia Law reigns and non-Muslims tread at their own risk. So, will they be content to stay within those zones in the USA?  Of course that is a rhetorical question.  The correct answer is more than obvious.

If we are to take this threat seriously, there are things we can do to protect ourselves and our loved ones.

#1. The Spiritual Remedy: This begins with petitioning our Almighty God and begging Him not to remove his hedge of protection from us.  If we assume that we are living in what is commonly termed “the end days”, we can also assume that violence and ungodliness of all kinds will escalate.  This will be accompanied by the judgment of God.  The Second Horseman of the Apocalypse, who is not geographically restricted, is now riding in Paris and will soon be expanding his territory. Today he may be operating in self-contained Syrian cells in Paris but tomorrow – who knows?  Can this horseman be far behind when Barak Obama has opened the doors of our nation to unscreened Syrians refugees that have been infiltrated by ISIS? But there is hope for God’s redeemed in Ezekiel 9:4-6. In this passage we are assured that the angel that dispenses God’s judgment on the ungodly has marked those who lament over the ungodliness with a seal that shall protect them from the prophesized destruction. My advice?  Be sure you have that seal.

#2. The Legal & Logical Remedy:  Every American should invoke the protection afforded to us by our 2nd Amendment to keep and bear arms.  Translation:  a gun on every hip and in every home.  Of course there are laws against such things but let me remind you of the words of Supreme Court Justice Ruth Bader Ginsberg in Bond v. United States, 2011: “Any law that violates the Constitution is no law at all.”  And if challenged in court regarding this right, perhaps Americans should consider reminding the courts that they are required to follow prior decisions.  In Purpura v. Christie, Docket # 15-CV3534, a long list of court decisions affirming the 2nd Amendment are listed. Yes, that’s Governor Christie who is named as a defendant – the same governor that claims to be pro-2nd Amendment and blames a Democratic legislature for NJ’s absurd laws.  He fails, however, to mention that he signed 23 additional gun control bills into law – laws that violate Article 1, Section 1 of the NJ Constitution as well as the 2nd Amendment of the US Constitution. I wouldn’t be surprised if Christie, as well as other presidential candidates, turned this into a political issue and made an effort to paint themselves as a protectors of the 2nd Amendment.  They understand that this would earn them poll points with the Conservative wing of the Republican Party. But when it comes to something as important as the 2nd Amendment, we need to apply the historical test to these candidates:  look at what they’ve done, not at what they say.

Rogue judges should also be referred to Article 4, Section 2 of the Constitution that states: The citizens of each state shall be entitled to all privileges and immunities of citizens in the several states.  Translation:  if you have an acknowledged constitutional right to carry in some states, that right must be extended to other states.  Since progressives are so fond of shouting “equality”, perhaps it’s time we school them about what constitutional equality really means.

#3. If #1 and #2 above fail and you or someone you love is unarmed and unable to defend themselves from an Islamic Terrorist on American soil, then you may consider serving a Notice of Claim addressed to the entity you hold responsible.  This can be any federal, state and/or local government entity that imposed an unarmed position on the victim in the form of preventing them from exercising their constitutional right to keep and bear arms and inalienable right of self-defense. However, it must be understood that immunity under the law for such officials varies from state to state.  One of the legal factors that protects their immunity is ignorance of an unsafe condition.  It is possible to remove this protection by citizens notifying their chief law enforcement official (including sheriffs), their local and state representatives, and their governor that in light of the threats expressed by terrorists against Americans, gun control laws that prohibit carrying firearms for self defense creates an unsafe environment.

In this regard it should also be noted that presidents are not immune from civil litigation.  For instance, in the United States v. Nixon (1974) a precedent was established that rejected Nixon’s claim that presidents enjoyed absolute and unqualified immunity from prosecution.  Immediately after this ruling, Nixon resigned.  Other lawsuits were instituted throughout the years that were either unsuccessful or settled, such as Jones v. Clinton in 1997.  The outcome is not the point.  The point is that presidents do not enjoy immunity from civil litigation. How interesting and pertinent it would be for a president who is deliberately and/or incomprehensibly ignorant of the ISIS threat against America to be charged with reckless endangerment. The real tragedy here is that the suit could only be brought after the tragedy occurs.

Therefore, it may be advisable if clear-thinking patriots conducted a nationwide campaign that includes all proper public notices (including public notices in newspapers, billboard signs, and certified letters) as well as other such marketing venues be used to formally inform all government officials that denying us of our right to self defense creates a state of reckless endangerment. If this were done, ignorance of the endangerment of such restrictions cannot be claimed.  Better yet:  they would know that ignorance of such restrictions and immunity in the event of a tragedy cannot be claimed. Repercussions from such actions against all enjoying any form of government authority would be interesting to say the least. It’s high time we keep those in office accountable.  They may not be the person guilty of  assault, but they would be the person that created an environment where citizens are turned into potential victims – and what is more reckless or dangerous than that?

Of course there are other questionable alternatives – like posting “gun-free zone” signs around your home – such as the ones that existed at the military recruiting offices in Virginia where some of our finest were murdered.  Perhaps  this motto would be more effective: A gun on every hip and a pig in every yard.

While Islamic Terrorists may have their no go zones all over the world, it’s time we create our own no go zones in America for them – zones that prohibit their presence instead of ours. When all is said and done, a constitutionally armed America is our best defense against cowardly terrorists.  To the terrorists, we should be saying:  come here if you dare, but if you do, your efforts will be greeted by the barrel of a gun.  And to our feckless representatives, we should be saying:  infringe upon our right to defend ourselves and our families and you will be served with a Notice of Claim that revokes your immunity from prosecution.

In conclusion, fighting terrorism in America is not limited to Jihadists.  We have plenty of home-grown officials that have recklessly endangered all of us by restricting our right to protect ourselves and our families.  In my not-so-humble opinion, straighten out the latter group and you’ll render the Jihadists virtually impotent.