HAS THE DEMOCRATIC PARTY PLACED ITS HOPES TOO HIGH IN HILLARY CLINTON? 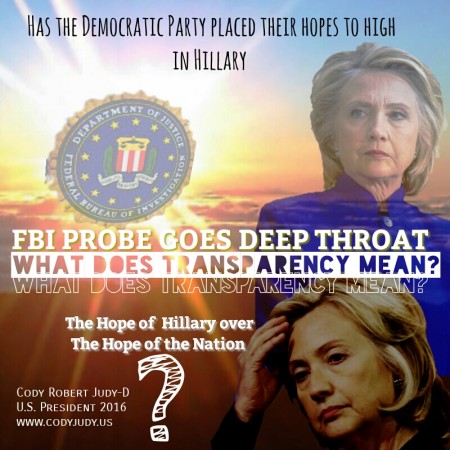 (Nov. 12, 2015) — FBI PROBE EXPANDS IN CLINTON SABOTAGING FBI INVESTIGATION with a COVER-UP OF NATIONAL SECURITY INTEL in the HABIT of 2 Different Stories.The lines of Longitude and Latitude intersect in the devils scope of two different stories to tell, of the same event, by the same person. This also describes the detailed Digital Aim burdensomely assigned to the National Security OFFICIAL INVESTIGATION of Hillary Clinton and the responsibility of FBI Officials to decipher for all intents and purposes the Authenticity of Truth as it relates to our being hacked by Beelzebub, Lucifer-Gucifer or Foreigners of our Heavenly State.

There’s no question Hillary was hacked, and by her Secretary of State position WE THE PEOPLE were, too. The question is; did she know she was the highest ranking foreign intelligence Representative of the United States of America and did she treat that responsibility about the same way she would treat a shopping trip to purchase a new outfit, schedule a yoga class, or chat with a friend on IM?

In Hillary’s own words she said it was regrettably .. She made a mistake. So, accessing how BIG a Mistake it was is not only the FBI’s job, but one that could have profound consequences on all America as they place trust in the FBI’s findings that could well be the determination of the choices presented to the American public for their next U.S. President in the coming 2016 elections.

You recall in the #Benghaz Congressional Hearings we learned then Secretary of State Hillary Clinton, #Clinton2016, related two different stories one to her family and a foreign authority and a totally different story to the Media and American people about Benghazi being about a planned terror attack on one hand and about a videotape on the other hand clearly just a month away from the 2012 election?

Well, apparently the FBI is not an agency you want to mince words or mix personal and professional work-related emails with for your own political future or pleasure.

In a New Reported Story today, disaster for the leading Democratic Party Presidential Candidate Hillary Clinton rest in purposely muddying the waters for FBI officials in an obvious intention to clear any wrongdoing by scuttling personal and professional emails.

That’s what politically is understood to be a deliberate cover-up – an action wholly created to camouflage or sabotage an official FBI investigation. H. Clinton has repeatedly down graded her forthrightness in turning over National Intelligence from 100% to 90% to most of them.

This has caused additional grief for the FBI officials burdened with the investigation concerning foreign hackers into U.S. TOP SECRET INTEL from the top foreign Representative of the U.S in Secretary of State H. Clinton.

FBI aagents are looking at U.S. Code 18, Section 1001, which pertains to “materially false” statements given either in writing, orally or through a third party. Violations also include pressuring a third party to conspire in a cover-up][ To be a violation, the statements do not need to be given under oath.]