(Nov. 12, 2015) — In a filing on Wednesday, Veterans Day, attorneys for defendant Joseph M. Arpaio filed a motion in Melendres, et al v. Arpaio, et al asking the court to reverse the admission of two exhibits into evidence, claiming the communications are “privileged.”

Melendres was filed in late 2007 after several individuals of Latino descent accused Maricopa County, AZ Sheriff Arpaio of racially-profiling them during “saturation patrols” and other attempts to identify illegal aliens.

In May 2013, U.S. District Court Judge G. Murray Snow ruled that Arpaio could not direct nor allow his deputies to stop or detain an individual solely based on the suspicion that he or she was in the county, and country, illegally.

Snow’s ruling, issued on May 24, 2013, stated that “The vast majority of persons arrested during small-scale saturation patrols were unauthorized aliens. Finally, a significant number of persons arrested during the large-scale saturation patrols were unauthorized aliens.”  Arpaio is well-known for his desire to strictly enforce federal immigration laws and Arizona statutes regarding the hiring of illegals.  He previously sought to ferret out crime through his now-defunct Human Smuggling Unit (HSU).

On Wednesday, The Post & Email and other sources reported that Mike Zullo, who provided oversight of an investigation carried out by Arpaio’s office for approximately a year by confidential informant Dennis Montgomery, was called to testify but invoked his Fifth Amendment right to remain silent on virtually all questions posed to him.

The majority of news reports about the hearing referred to Zullo as the “leader of Sheriff Arpaio’s posse,” referring to the Maricopa County Cold Case Posse, although the Maricopa County Sheriff’s Office (MCSO) has an estimated 41 posses and 1000 volunteers, according to spokeswoman Lisa Allen on Thursday.

A widely-disseminated story by Jacques Billeaud of the Associated Press headlined with “Leader of Sheriff Arpaio’s posse takes Fifth Amendment.”

However, in a November 6 article, Cassidy wrote, “The posse member who gained notoriety as Maricopa County Sheriff Joe Arpaio’s favorite pet-project investigator is scheduled to testify early next week in the lawman’s civil-contempt hearings.”

Cassidy later explained that “Zullo first captured headlines in 2012, when Arpaio introduced him as his point-man in his investigation into the validity of President Barack Obama’s birth certificate” without reporting that Arpaio and Zullo had declared the image posted by the White House purported to be a scan of Obama’s long-form birth certificate as well as his Selective Service registration form to be a “computer-generated forgery.”

The media has not investigated the claims and has avoided the topic to the point of a virtual blackout.

Zullo testified for the last 15 minutes of Tuesday’s proceedings.  Eyewitness Stephen Lemons of the Phoenix New Times reported that “most of” Tuesday’s testimony was given by Capt. Russ Skinner, who formerly led the Court Compliance Division of the MCSO.

The second document was the plaintiffs’ response to the defendants’ aforementioned motion, which reads: 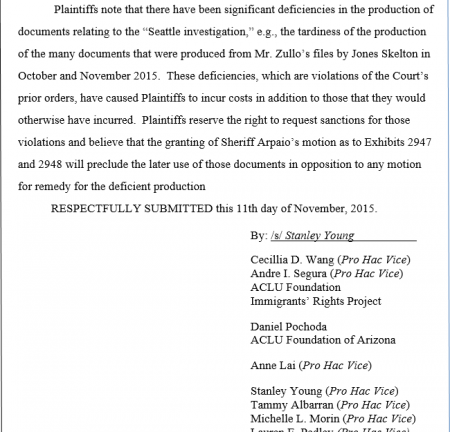 A third entry on November 11 is a request by the plaintiffs for an official transcript of Tuesday’s proceedings.