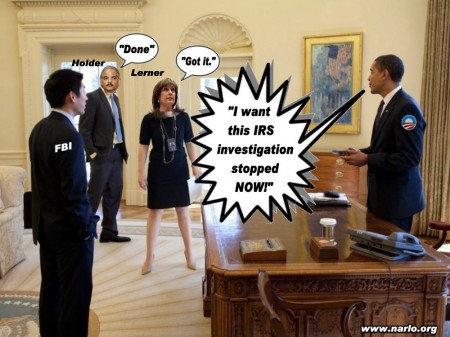 (Nov. 8, 2015) — The collusion and corruption in Washington, DC became blatantly obvious when U.S. Attorney General Loretta Lynch’s Department of Justice (DOJ) announced quietly, on a late Friday afternoon, that the FBI has suspended its investigation into the Internal Revenue Service’s (IRS) for illegally targeting conservative groups for special scrutiny in their applications for tax-exempt 501(3) and (4) status. There would be no indictments of Lois Lerner, who apparently was the lead perpetrator of the political scandal, or anyone else at the IRS. This decision came down in spite of the overwhelming evidence of obvious illegal activity including obstruction of justice, destroying or hiding evidence, lying under oath and stonewalling by John Koskinen, the IRS Commissioner.

It is no wonder that Obama (BHO) could say, with a straight face in his interview with Bill O’Reilly last February, that “there was not even a smidgeon of wrong doing at the IRS.” The “fix” was already in, ladies and gentlemen, like so many other “fixes” in Washington, DC. This isn’t a government. It’s a scam and a Ponzi-scheme style racket engaged in racketeering, and American citizens are none-the-wiser pigeons. They are getting fleeced every day and they don’t seem to mind.

Judicial Watch has invested hundreds of thousands of dollars into their own investigation of the IRS. Judicial Watch’s president, Tom Fitton, was so furious about the DOJ-FBI decision he issued the following statement:

“President Obama’s IRS was used against his opponents to help him win reelection. So the Obama Justice Department’s decision to shut down its IRS abuse investigation with no prosecutions is as unsurprising as it is corrupt. Judicial Watch’s independent litigation proved the Obama IRS obstructed justice and destroyed evidence. And we uncovered that the IRS and Lois Lerner conspired with the Justice Department and FBI on a plan to jail the very Americans the IRS was illegally suppressing. In fact, Justice Department lawyers recently admitted in federal court that the IRS watchdog is still digging through IRS backup tapes and has no idea when the search will be complete. This same Justice Department decides it can shut down an investigation before it has all the evidence? That might pass muster in Chicago, but America deserves better – the IRS is not above the law.”

“Congress needs to get its act together and consider the impeachment and removal from office of officials, including Barack Obama, responsible for the worst abuse of the IRS in American history. Judicial Watch will continue its independent investigation and litigation that has made it the best source for the truth about the continuing IRS scandal. In the meantime, the Justice Department and FBI, which illegally obtained IRS files on Americans with the help of Lois Lerner and the Obama IRS, should finally be investigated for their role in Obama’s misuse of federal law and tax agencies against innocent Americans.”

THE FIX IS IN, LADIES AND GENTLEMEN

Let’s face it, the “fix is in” everywhere in government, local, state, or federal.

The fix was and still is in on the IRS, with the help of Obama’s DOJ and FBI ….. a cover-up.

The fix is in on Benghazi for Hillary and Obama and the Democrats ….. a cover-up.

The fix is in on Fast and Furious, for Obama, Eric Holder and ATF ….. a cover-up.

The fix is in on the Federal Reserve and the world central banks. They own us.

The fix is in when banks and corporations are too big to fail and they get bailed out with our money.

The fix is in on the Congress, the U.S. Supreme Court and all other courts. Since 1945 and the creation of the Federal Rules of Civil Procedure, the courts ceased being constitutional courts and citizen grand juries were abolished. The courts are now admiralty courts. The legislatures and the courts are just for show to make the people think they are being represented and that government is dispensing equal justice.

The fix is in on big corporations, big unions and big powerful special interest groups that use the government to control us.

The fix is in on international trade agreements and world trade. The corporations win and the American worker loses.

The fix was and still is in on ObamaCare. Producers get to pay for the freeloaders. It’s good for Democrat votes. It was passed without a single Republican vote. Republicans are impotent against the premeditated, 100-year Progressive onslaught.

The fix is in on Planned Parenthood (PP). PP will go on performing 300,000 plus abortions every year, and the taxpayer-sucker will provide PP with over $500,000,000 every year. What does that $500,000,000 buy the American taxpayer? A lot of low-information female Democrat votes.

The fix is in for American Muslims by the Obama Administration. Muslims can sue for being denied religious freedom and receive huge monetary awards. But Christian bakers, flower shop owners and photographers can be fined, penalized, jailed and put out of business by the government for not providing services to gay weddings because the gay lifestyle is contrary to Christian religious convictions.

The fix is in on the elections. The Democrats have bought off most of the voters with our money. That is why the Republicans are impotent.

The fix is in with the American mainstream media. It is a bought-and-paid-for Political Action Committee (PAC) for the Democrat Party with no requirement to register direct and in-kind contributions with the Federal Elections Commission.

The fix is in on the Iran deal. Someone got paid off, big-time. It’s good for business and international trade and big oil, but not for you, much less national security.

The fix is in on illegal immigration and sanctuary cities. It’s good for Democrat votes but really bad for the American taxpayer and the American worker.

The fix is in on global warming. Man did it and he must pay, even if it isn’t true and the whole scheme is a move towards global control. It doesn’t make any difference that volcanoes and forest fires may spew out more carbon dioxide in one year than the entire CO2 emissions of man since the dawn of the industrial revolution. Government, environmentalists and climate scientists are so invested in the lie they don’t know when to stop lying.

The fix is in on radical environmentalism. Man is guilty and he must pay, especially Americans. Environmental mandates override constitutional protections.

The fix is in on the move to take away our guns, either by law, or by UN Treaty. It’s coming even though it could trigger a revolution in America.

The fix is in on public education. It is now social, environmental and world government indoctrination. Government is preparing the next batch of serfs to be good little compliant dunderheads for the collective that won’t challenge authority, aided and abetted by teachers and the teachers’ unions.

You see, it’s OK for the IRS to target conservative organizations seeking tax-exempt status for political reasons. It’s OK to send the IRS, the FBI, OSHA and ATF out to harass a company that is working to true-up the voter rolls. It’s OK for ATF to run guns that kill innocent civilians and border patrol agents. It’s OK to deny security to one of the most dangerous consulates on the African Continent and then lie about the planned attack on that consulate that killed a U.S. Ambassador and three other brave Americans. It’s OK to shove ObamaCare down the throats of Americans and make them pay for a substandard, inefficient, costly and intrusive health care system. It’s OK to let millions of illegal aliens cross our borders, get on the welfare rolls and then seek refuge from the law and ICE in sanctuary cities. It’s OK, at least for Democrats, that illegal sanctuary cities are allowed to exist in the first place. It’s OK to make international trade deals that suck jobs out of America. It’s OK to cut agreements with nations that sponsor terrorism and add to the instability in the Middle East. It’s OK to brainwash our kids. It’s OK for government to control every aspect of our lives; at least it is OK for Democrats. And we could go on and on and on about the “FIX IS IN.”

It is apparent that each of us is just a pawn, a pigeon, a serf, a lifetime debtor, a sharecropper, a slave and a sucker to the national and international perpetrators of corruption, collusion and racketeering. The perpetrators have you in the palm of their hands and most of the people don’t even know it ….. or care.

Given that the fix is in and the IRS has skated any accountability for illegal acts, like everyone else in Washington, DC, it is abundantly clear that the DOJ will never indict Hillary for her crimes and she will probably be the next President, unless interceded by an act of God ….or the freeloaders suddenly get a conscience and vote for a Republican. We wouldn’t suggest that you hold your breath waiting for that to happen.

Certainly you don’t think that the Republicans can win the presidency when most Americans like a government that provides them with “free” stuff. Elections are all a ruse, a joke and a show to make us think we are in control. Because you see, ladies and gentlemen, the FIX IS IN and “BHO + IRS + DOJ + FBI = Collusion, Corruption and Racketeering” and there is no higher authority, other than the people, that can stop them. But will the people stop them? So far, we see no evidence that they will.

For the last 10 years at the National Association of Rural Landowners, we are working tirelessly to stop them. Why not join us in the fight.

Ron Ewart, a nationally known author and speaker on freedom and property rights issues and author of this weekly column, “In Defense of Rural America”, is the president of the National Association of Rural Landowners (NARLO) (http://www.narlo.org/), a non-profit corporation headquartered in Washington State, an advocate and consultant for urban and rural landowners. He can be reached for comment at mailto:info@narlo.org.