“NOW IS THE TIME” 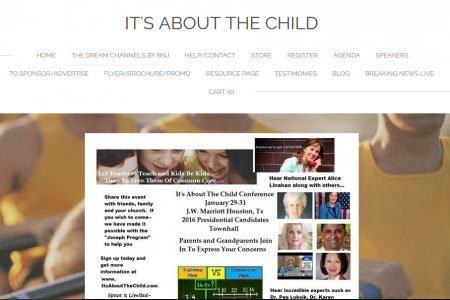 (Nov. 6, 2015) — The Post & Email recently interviewed Ruth Bryant White, found of Breaking News Journal, about the launch of her new TV station in Houston, TX scheduled at the end of January.

White spoke with us from Alabama during a break in her busy schedule after interviewing Alabama Supreme Court Chief Justice Roy Moore.

White launched BNJ in 2008 and particularly over the past two years has been working on securing financial investment to launch Breaking News Journal TV.

White has worked in Hollywood as a television producer.  In 2006, she was a guest on “The Factor” hosted by Bill O’Reilly, after which O’Reilly informed her that “We got so much email from people who want to know about you and want to hear more about what you have to say.”

Last year, BNJ was awarded the contract to broadcast the performances of Sheila Ray Charles (Robinson), daughter of singer Ray Charles.  In addition to her musical performances, Sheila Ray speaks to church groups about drug abuse and prison life based on personal experience.

The new BNJ station will have several channels featuring up to 40 programs to include athletics, children’s educational shows, fashion, comedic programs and investigative reporting.  There will also be a “news desk” for grassroots groups to “talk about what’s happening on the ground,” White said.

“The good thing about it is that it will be ‘TV on demand,'” White told us. “People can look at any program as often as they want; it’s not a line-up as it is on digital or cable. When you pay for cable, you are paying for the very things which you say you don’t like. Why not get yourself a Roku or Amazon Fire device and watch the programs on your big-screen TV when you want?”

By design, the launch of BNJ TV will coincide with the “It’s About the Child” conference to take place at the Crowne Plaza Hotel in Houston, TX January 29-31, 2016.  Seats at the conference are open to the public on a first-come, first-served basis.  White encouraged all who would like to attend to purchase tickets and make arrangements now, as space is limited to 400 people.

Over the last four years, White has worked to expose what she believes are the harmful aspects of the Common Core curriculum adopted by a majority of states beginning in 2010. Some states have since rejected the curriculum or moved to alter it, and homeschooling has reportedly increased since its inception.

White believes that Common Core contains a “hidden agenda” and poses a grave danger to children.  She and her husband, Steven White, are both ordained ministers, and Ruth ran for president in 2008.

The station will be completely family-friendly and normally requires a subscription of $150 annually, substantially less than the cost of cable television.  BNJ is seeking “700 valiant warriors” to help launch the station at the special rate of $70 annually if they subscribe now.  While the official launch date is January 29, White said that “should the 700 valiant warriors step up to the plate within the next few weeks, then we will work with the developers and have it up by the holidays.”

White said that she has been in touch with many Tea Party members who are “frustrated” that those for whom they have campaigned and put in office have “become turncoats.”  “People are very frustrated about that and don’t have a voice, so Breaking News Journal is giving them that voice,” she said.

“We have T-shirts for sale.  Tell everybody to get their T-shirts and sign up for the conference.  We have to do this…it’s for your children, my children, our grandchildren,” she said.

Downloadable and printable flyers are available on the event’s website for distribution.

“One of the things we need to understand is that when communism and socialism take over, you don’t have communication.  They take over your newspapers, radio and television.  So we need to get on the stick, and that’s why we need 700 valiant warriors.  We will be live-streaming the 2016 presidential townhalls.  If 700 people aren’t going to be there for the children, we are really in trouble,” she said.

“We needed a major event to launch with.  I thought the 2016 presidential candidates’ townhall was going to be the main draw, but people are so frustrated about what’s going on in media and with Common core that they said they are more interested in having their own media and being able to have a voice.”

White said that mainstream television contains so much “trash” that Madonna has said that she will not allow her own children to watch it.  “That’s common for people in Hollywood and news; they don’t let their kids watch the trash, but they don’t mind it messing up your kids’ minds,” she told us.

We asked White how she came to interview Moore, to which she responded, “Diana Crews of City on a Hill is a member of our team.  She followed everything that happened to Judge Moore when he was removed from his post as Chief Justice.  She attended every hearing.  They trusted us based on Diana, because she has always been there for them through the hard times.  Judge Moore’s wife immediately signed on.  She said, ‘I’m in, I’m on, whatever you need…’ They gave us a studio which we still have for when we get ready to film more episodes of ‘Colonel Eidsmoe and the Constitution Hour,’ which is what their program is going to be called.

“We have three different programs there; we did four episodes of the ‘Constitution Hour;’ we interviewed their young attorneys and Judge Moore’s wife; we interviewed Col. Eidsmoe.  Then Judge Moore invited us to the (AL) Supreme Court, into his office, where we interviewed him and took pictures with him.  He can quote the Constitution without looking at it; he knows it.  I felt so honored spending time with him,” White told us.

She equated Moore’s 2003 removal from the Alabama Supreme Court as a result of his refusal to remove a Ten Commandments monument from the courthouse with her husband Steve’s loss of his teaching contract resulting from his refusal to teach the Common Core curriculum.

In 2012, Moore was re-elected as Alabama Supreme Court Chief Justice.

“I think they are so much alike; they have both withstood the test in the sense of standing up for their rights. It’s hard when you don’t know where your next dime or dollar is going to come from, but Steve stood up, and God is now opening the doors.  I’ll tell you what:  people will admire your taking a stand.  Yes, we suffered the consequences, but we now have everything set up.  But that’s why we need the 700 warriors.  Freedom is not free,” White said.

She told us said that Moore considers it his duty to educate other judges and attorneys within his circle of influence on the Constitution and Bill of Rights.

Regarding the 2016 presidential election, White said that the current candidates “need to endorse what Breaking News Journal is doing and tell people to subscribe to it.”  “When we go to Houston, we are going to have the moms and dads of ‘Stop Common Core,’ the moms and dads of pro-life groups and homeschooling groups and ask the candidates real questions, and it will be live-streamed all over the world,” she said.

On the evening of the CNBC-hosted presidential debate on October 28, White said that she “got calls from people saying they were turning off their TV.”  A Tea Party leader also observed to her that while some have pledged not to watch network news, they still tune in to the debates “like a bunch of junkies.”

White believes BNJ offers a viable alternative to the mainstream media’s disingenuous behavior.  She recently spoke at a Ted Cruz campaign event in Tennessee, where she began her address with, “I want to talk to the kids for a second.  This is for you.  We want to protect you.  That’s what this is about because we care for you.  We’re going to have a Breaking News Journal kids’ channel where you can produce and host your own program.”  “They were elated about it,” White told us.

A major figure in Italian soccer, Luca Bocci, a former Tea Party activist in Italy, is working with BNJ and will be speaking at the conference.  “He had to leave Italy because things are so socialist there now.  He said, ‘America is the only one standing,’ and we’re about to lose that. He’s come on board; he does the World Cup Soccer for Reuters, and he’s coming to Breaking News Journal.”

BNJ will not be endorsing any candidates for elected office.  “People have lost that art of understanding that if you’re a real media source, you don’t go around endorsing people, because the other person just isn’t going to get a fair shake,” White said.

Guest speakers at the “It’s About the Child” conference include blogger and author Jason Hoyt; Common Core opponent and Tennessee elected official Karen Bracken; constitutional attorney, lecturer, and historian Col. John Eidsmoe; a number of educators, professionals and entrepreneurs; and a 16-year-old high school student who successfully sued her school district to form a pro-life club.

Update, November 7, 2015:  Ruth Bryant White has informed The Post & Email that Heidi Cruz, wife of presidential candidate Ted Cruz, has confirmed her attendance at the “It’s About the Child” conference.