ARGUES OBAMA COULD BE NAMED A “SUSPECT IN THIS CASE”

(Oct. 26, 2015) — On December 18, 2007, in a soliloquy about the 2008 Democrat presidential primary between Hillary Clinton and Barack Hussein Obama, MSNBC commentator Chris Matthews presented a statement made by former Sen. Bob Kerrey describing of Obama’s several years spent in Indonesia as a “real strength.”

Matthews questioned whether or not Kerrey, described as a “Hillary backer,” was “putting the shiv in” to Obama while pretending to point out Obama’s positive presidential attributes.

Kerrey claimed that Obama and his family had “chosen Christianity” and that bloggers expressing distrust of him as “a Manchurian candidate” harbored unfounded fears.

Matthews then presented visually and read from a statement Clinton made in response to Kerrey’s in which she said that Kerrey “was being very complimentary of Sen. Obama…”

“But didn’t Hillary dump on Obama a few days ago for playing up his Indonesian roots?  So what’s she up to here?  Is she pushing how great he is for having been born in Indonesia or what, or simply reminding everybody about his background, his Islamic background?”

On Monday morning on Twitter, CBS White House correspondent Mark Knoller affirmed that Obama had spent “5 years as a youngster” in Indonesia and therefore “boasts a ‘close association’ with that country.”

Other versions of Obama’s life story say that he spent four years in Indonesia between the ages of 6 and 10, while a book published about Obama as a “global president” states that he went to Indonesia at the age of four and returned to the U.S. at age ten.

Brian Williams, then of NBC News, said in his narration of a documentary about Obama’s life and rise to political fame that Obama had returned to the U.S. at age nine.

Obama is meeting with Indonesian President Joko Widodo this morning.  According to Knoller, the Indonesian flag is flying at Blair House, where foreign heads of state stay during their time in the U.S. at the invitation of the president. 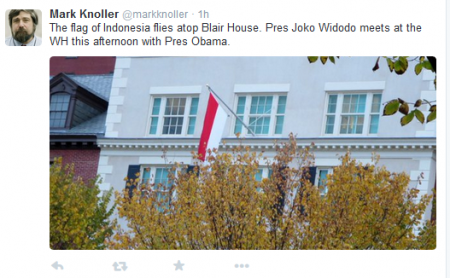 Blair House was named after an ancestor of blogger, former presidential candidate and Obama eligibility challenger Montgomery Blair Sibley, whose many ancestors served in government, law and as postmaster general under President Abraham Lincoln, respectively, among other roles.

In a video uploaded to YouTube on July 21, 2009, Matthews hosts former Rep. John Campbell of California, who co-sponsored a bill in Congress which would have required presidential candidates to present their original birth certificates to be demonstrate constitutional eligibility in the future.

Article II, Section 1, clause 5 of the U.S. Constitution requires that the president and commander-in-chief be a “natural born Citizen,” have resided in the country for 14 years, and be at least 35 years of age.

At the beginning of the segment, Matthews distinguished between a “U.S. citizen” and a “natural born U.S. citizen” in his reference to “The Birther movement.”  Mathews played a video clip from a townhall meeting involving Rep. Mike Castle of Delaware in which a woman held up her own birth certificate and claimed that Obama was a “citizen of Kenya.”

Rep. Bill Posey of Florida’s 8th District sponsored the bill, although Matthews incorrectly identified Posey as having represented a district in Indiana.

Initially, Matthews referred to the bill as a “crazy proposal” but listened as Campbell explained why he believed the proposal was not “crazy.”  Campbell presented Sen. John McCain’s birth in Panama, Barry Goldwater’s birth in the Arizona Territory and Mitt Romney’s father’s birth in Mexico as examples.  “This is not a new issue,” Campbell said.

“Most elements of the Constitution have implementing legislation…this one does not,” Campbell said.  Campbell did not refer to Obama during the approximately three minutes in which Matthews allowed him to speak.  “Why is that crazy, though, Chris?” he asked.

“Nice try,” Matthews responded, turning the discussion to Obama’s citizenship and holding up what appeared to be a paper Certification of Live Birth bearing Obama’s name and one visible fold.  Matthews then accused Campbell of “appeasing the nutcases” and “verifying the paranoia out there” by cosponsoring the bill.

After Campbell said it “doesn’t matter” whether he had any doubts about Obama, Matthews became more strident, stating, “You are feeding the wacko wing of your party.  Do you believe that Barack Obama is a legitimate, native-born American or not?  What do you believe?”

“As far as I know, yes,” Campbell was able to articulate before Matthews said, “I’m showing you his birth certificate right now” as he held up the paper.  When Campbell said he could not see it because he was “looking at a camera right now,” MSNBC’s camera showed an electronic image in which the information it contained was not clear.

Talking over Campbell’s attempts to speak, Matthews sneered, “Do you want me to mail it to you?”  Matthews then read the details from the image, calling “Honolulu” a “state.”  “What more do you want?” he asked his guest.

“That bill is not about Barack Obama,” Campbell said, after which Matthews asked, “What about you?  What are you about?” and demanded that Campbell say that Obama “is a legitimate president of the United States.  He was born in this country.”  When Campbell said, “Yes, I believe so,” Matthews retorted, “We’re making progress now.”

Matthews then said that Posey’s spokesman had said that Posey wanted to “see an authentic birth certificate from this guy,” apparently referring to Obama.  “This is what the congressman said:  ‘I can’t swear on a stack of Bibles whether he is or isn’t a native-born American.'”

Matthews asserted that Obama’s birthplace “was not a good question to raise,” to which Campbell responded that “questions” would be put to rest if the bill were to pass.

“How will it put it to rest?” Matthews loudly demanded, conflating the 22nd Amendment, which limits the president to two terms, with the presidential eligibility question.

Matthews then laughed at the prospect that Obama would “have to show a birth certificate” to “be re-elected president” in 2012.  He claimed that if the bill were passed and Obama were asked to sign it, it would “profile him as a suspect in this case.”

Campbell argued that it is not “wacky” to ensure that candidates meet the eligibility criteria.

Matthews advised Campbell to obtain a copy of Obama’s birth certificate.  “You didn’t have to be on this show to get a copy of it if you have any interest in finding it,” Matthews said, despite the Hawaii statute which prevents the release of vital records to anyone “without a direct and tangible interest in the record.”

“I want to see the letters that you send to your constituents, and I want to know whether you tell them, ‘You know, sir, I have a copy of his birth certificate.  We really don’t need it for this president, but I understand the need for future presidents,'” Matthews demanded.

Campbell argued that passage of the bill would, contrary to Matthews’s claims, “shut this stuff down,” after which Matthews said, smiling, “No, it won’t…if this shuts it down, I’ll be shocked.”

To which “case” was Matthews referring with Obama as a “suspect?”

Why Did Chris Matthews Change His Obama Birthplace Story? added on Monday, October 26, 2015

One Response to "Why Did Chris Matthews Change His Obama Birthplace Story?"