On Tuesday, the duo gave a press conference outside of The Brookings Institution in Washington to publicize the issue and ask Obama not to veto the legislation, which passed both chambers of Congress as of October 7.

On Thursday, DefenseNews reported that the bill “sets policy” rather than funding for the U.S. military.  The bill’s title is “An act to authorize appropriations for fiscal year 2016 for military activities of the Department of Defense, for military construction, and for defense activities of the Department of Energy, to prescribe military personnel strengths for such fiscal year, and for other purposes.”

Subtitle D of the bill states that there is a “Prohibition on use of funds for transfer or release of individuals detained at United States Naval Station, Guantanamo Bay, Cuba, to the United States.”

Sections 219-224 place “limitations on availability of funds” for various programs under development and “for Integrated Personnel and Pay System of the Army” (Section 224).

At 3:45 today, Obama will hold a “photo-op,” according to The Hill, when he announces his veto of the bill.

Several years ago, many, including the ACLU, were concerned that the 2012 NDAA provided the president the authority to order the arrest and incarceration of U.S. citizens without a warrant and “without trial.”  The resulting activism led to a number of communities’ nullification of the indefinite detention provision.

On Thursday, CBS News reported that Obama objects to the bill because “it pumps $38 billion into a Pentagon war fund that falls outside of budget ceilings, and the bill would also make it more difficult for him to fulfill his pledge to close the detention facility at Guantanamo Bay, Cuba.”

Another issue appears to be how “Overseas Contingency Operations” will be funded.

According to The Wall Street Journal, Obama will veto the bill “to coerce more domestic spending.”

The White House has said President Barack Obama plans to veto the sweeping National Defense Authorization Act (NDAA), which authorizes spending for the Pentagon. Obama and his fellow Democrats object to the measure because it uses some $90 billion meant for war spending to avoid automatic budget cuts to military programs.

Obama and many other Democrats are pushing for a budget deal that would also address domestic spending cuts.

Republicans bashed Obama for his promised veto, saying it foolishly risked national security as the country balanced rising threats from Islamic State militants and others.

Republicans have the majorities in both chambers of Congress.

Just prior to receiving the joint statement, the House Armed Services Committee issued the following: 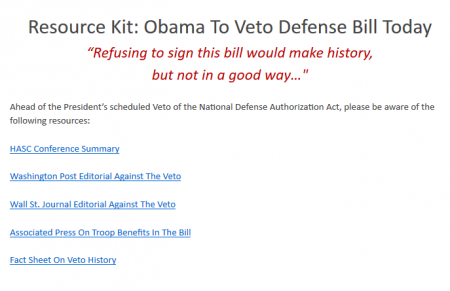 The full announcement from the two chairmen reads as follows:

Whether or not Obama is constitutionally qualified to serve as commander-in-chief has never been answered. Claiming a father who was a citizen of Kenya and a US-citizen mother as well as dual Kenyan-US citizenship at birth, many constitutional scholars and attorneys contend that Obama does not meet the definition of a “natural born Citizen,” one of the three requirements for the president and commander-in-chief outlined in Article II of the U.S. Constitution.

No member of Congress since 2008 has been willing to launch an investigation into Obama’s eligibility, even in light of the declaration by the Maricopa County Cold Case Posse in 2012 that an image purported to be of Obama’s long-form birth certificate which was posted on the White House website and his Selective Service Registration form are “computer-generated forgeries.”

More than a year ago, a congressional staffer told a reader of The Post & Email that “We know the birth certificate is a fake.”

The mainstream media refuses to investigate or report on the issue as one of national security, as Maricopa County Sheriff Joseph Arpaio claimed it to be in 2012.