IS THERE A PLAN TO DESTROY WESTERN CIVILIZATION? 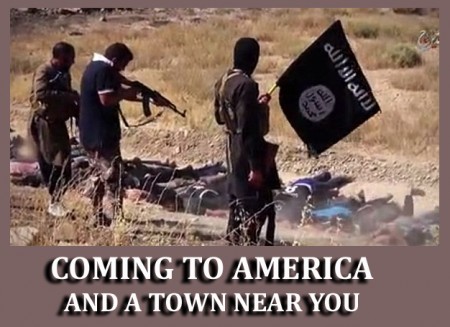 (Oct. 16, 2015) — The Jewish Community Federations of North America have come together to provide humanitarian aid for Syrian refugees. The organizations, paid contractors who are identified in the Jewish Coalition for Disaster Relief, are too numerous to mention here, but include AIPAC, AJC, B’nai B’rith Int’l, HIAS, ORT America, and National Council of Jewish Women (NCJW), who are furthering the cause of population redistribution.

Refugees, unlike migrants, are defined as those who flee their homes because of persecution. President Obama authorized the State Department to admit 85,000 refugees fleeing humanitarian crises worldwide in 2016. Just as these Islamists have invaded Europe, so our multiculturalists are funding their invasion into America, and despite Saudi Arabia’s air-conditioned tents that are erected and ready to accommodate three million for their annual pilgrimage to Medina, no “Syrians” are welcomed within the Islamic world. By definition, not only are these Syrians not refugees, but the Department of Homeland Security (DHS) has confessed that they have no screening process for “Syrian refugees.”

ISIS/IS promised a “sea of chaos” to flood the West with 500,000 refugees – not merely to create a humanitarian crisis and strain our resources, but to also include jihadists to force Islamic conversion and establish Sharia as the law of the land. Islamic countries claim to have declined the Syrians because of terror risks, and the Jewish Federations have turned a blind eye. Historian Serge Trifkovic wrote: “The refusal of the Western elite class to protect their nations from jihadist infiltration is the biggest betrayal in history.”

And who are these Syrians? The Federation’s announcement contained a particularly deceptive photo of a wide-eyed, blonde toddler complete with Teddy bear, but the refugees are primarily able-bodied young men, weaned on anti-Semitism and hatred of the West and democracy, who are seen stomping on or burning our flags, brandishing rifles, hurling fire bombs, and wielding swords for decapitation. These are Islamists who have waged wars against Jews and Christians and brought their savagery to Europe, complete with their methods of intimidation – riots and rapes of children and women. The rape count was more than 5,000 in 2008 and more than 6,000 in 2009; Muslims account for 50 to 75 percent of all rapes of women in Norway, Denmark, and Sweden, and these are the men who are designated to receive Federation funding.

The BBC’s website of 200 images is also dishonest in its refugee presentation – providing a 53% focus on children, 36 percent men, and 10 percent women, whereas the United Nations Refugee Agency revealed that 75 percent of “refugees” were young men.

Interestingly, the largest Muslim charity, with its link to terror financing and settling refugees from terror-torn Syria, has an operating budget of $240 million in over 30 countries. The charity is part of a network calling for the settlement of thousands of Syrian refugees into “rich countries.” Indeed, this is Barack Obama’s 2008 promise to fundamentally transform America, and the Islamic State’s threat to flood the West. Jusuf Al Qaradawi of the Muslim Brotherhood declared their mission “to free the occupied lands of the laws and the tyranny of disbelievers. It is undoubtedly a case of jihad for the sake of Allah.” Are we to believe that the Federations (and the BBC) are unwittingly complicit as they aid and abet those who would bring their misery to the West?

Crain’s Cleveland Business reported that David Fleshler, chair of the board of directors of Global Cleveland, seeks to invite 100,000 foreigners to Ohio. Is it possible he is unaware that Ohio is one of eleven states that already have more people on welfare than are employed, and that the Qur’an prohibits Muslims from assimilating into kaffir lands? He alleges that immigrants will integrate and be employable, while Darrell Hamm, director of the non-profit The Refugee Response, claims to assist refugees with their adjustment.

Judicial Watch’s Corruption Chronicles states: “Conveniently omitted are the devastating impacts of illegal immigration like the billions of dollars American taxpayers spend annually on their education, healthcare and incarceration,” as Germany is now experiencing. They bring with them greater demands for intolerance and accommodations, destruction of the existing cultures, rioting and violent crime, as they perform the Qur’anic edicts to establish jurisdiction in lands of the infidel.

Judicial Watch’s recent report shows that 1,519 foreigners with terrorist ties were granted special exemptions and residency or asylum through a Department of Homeland Security (DHS) program, to which President Obama appointed Fatima Noor to the post of assistant director for US Citizenship and Immigration. Where prior to 2014, they would have been banned from entry, these 1,519 are currently in the US with the same rights and benefits afforded legal residents.  At a time when restrictions were being eased during an asylum fraud of February, 2014, the administration unilaterally altered the Immigration and Nationality Act while also announcing our projected acceptance of refugees to 100,000 yearly by 2017. NumbersUSA reported that a new Pew study found that immigration will account for 88 percent of US population growth over the next 50 years.

The Frankfurter Allgemenie and international statistics show that these foreigners are not “refugees,” but “migrants” who are not under threat of war or persecution. The migration is their hijrah, a 1400-year-old strategy of Islamic expansionism, which, coupled with military conquest, will subvert and subdue the host and begin the complete transformation of that country. These are migrant warriors.

Hungarian Prime Minister Viktor Orban wisely warned that the wave of mostly Muslim refugees coming to Europe threatens to undermine the continent’s Christian roots. “They represent a profoundly different culture.” All too obvious is the dearth of Christian and Jewish refugees who truly need asylum from the jihadists.

Meanwhile, the International Rescue Committee (IRC), headed by former British Foreign Secretary David Miliband and Labour politician, praises the intake of Muslims into Germany (as the Germans march and rebel against Islamization), Iceland and Sweden, and demands that Obama admit 65,000 mostly Muslim Syrians to the US. Miliband, who is affiliated with George Soros, Hillary and Bill Clinton, and Samantha Power, reminds us that more than 11 million Syrians have been made homeless by conflict and Syria is host to 33,000 asylum seekers and refugees from Iraq, Afghanistan and Somalia. Miliband will not admit that Arab states refuse their brethren, but he is sure to remind us that no matter how many we take in, the number will be “unacceptable.”

The very lucrative refugee resettlement programs are used by those who hate non-Muslim countries and wish to replace their laws with Sharia. Breitbart News reveals that the US already admits more than a quarter of a million Muslim migrants each year. Obama wants to add 10,000 Syrian migrants to that number. The Jewish Federations, Catholic Charities, World Council of Churches, and other “altruist” counterparts are conspiring against democracy, unintentionally or deliberately, to destroy Western civilization. To support them is to hasten some very Syrious and irreparable consequences.