(Oct. 13, 2015) — On Tuesday The Post & Email received a letter from TDOC inmate Walter Francis Fitzpatrick, III reporting that he was asked to leave while a disciplinary board decided the status of a write-up he received for refusing to participate in a class.

Fitzpatrick has been imprisoned since August 19, 2014, after his conviction on “aggravated perjury” and “extortion” by a McMinn County jury. Judge John Kerry Blackwood, who was set to retire last month, sentenced Fitzpatrick to three years in state prison following a lengthy soliloquy in which he berated defendants invoking their “constitutional rights.”

The letter was dated 4 October 2015, with an additional date of 8 October 2015 added when he began a new section.

Fitzpatrick received an initial write-up for the same reason in late June when he declined to participate in the Pro-Social Life Skills class, as the workbooks indicate that the course is designed to effect modification of “criminal” behavior.  Fitzpatrick told The Post & Email that he did not wish to incriminate himself.

On June 19, Fitzpatrick reported that he was physically threatened by PSLS instructor Terry Hopper for having declined to participate and issued the write-up, after which Fitzpatrick filed a complaint against Hopper and others.

The initial write-up was not pursued.  Fitzpatrick believes that the second write-up was issued because fellow inmate Jerome L. Johnson received one for the same reason in July which was not dismissed, but rather, upheld by Warden Mike Parris and TDOC Commissioner Derrick Schofield.

Johnson is black and Fitzpatrick is white. Johnson concluded that he was the victim of racial discrimination because of the disparity in the way the two cases were treated and filed a Title VI civil rights complaint with the US Department of Justice.

Johnson appealed his conviction to Parris and Schofield, both of which upheld it.  He then appealed to Tennessee Gov. Bill Haslam. 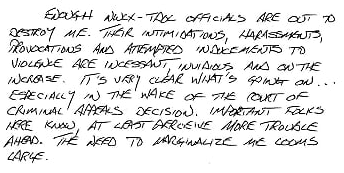 Walter Fitzpatrick Barred From His Own Disciplinary Hearing added on Tuesday, October 13, 2015

One Response to "Walter Fitzpatrick Barred From His Own Disciplinary Hearing"