WILL IT BE “BORING” OR SOMETHING ELSE? 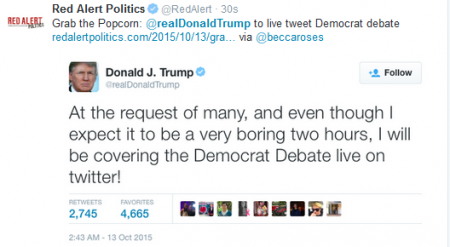 (Oct. 13, 2015) — On Tuesday afternoon, Republican presidential candidate Donald Trump tweeted that he will be “covering” the first Democratic presidential debate to be held on Tuesday evening in Las Vegas beginning at 8:30 p.m. EDT.

CNN Money speculated that “The Democrats’ turn in the spotlight will seem much less popular by comparison” to the two Republican debates held on August 6 and September 16, respectively, with high interest attributed to the presence of Trump.

Joe Biden, who has not announced a decision as to whether or not he will enter the race, could be participating, with an extra podium available should he decide to take part, according to CBS News.

Trump has predicted that Tuesday night’s debate will be “boring.”

Other news outlets are also reporting of Trump’s planned tweet session this evening.

Since his announcement, Trump has ceased to issue tweets, at least temporarily, while supporters and detractors are expressing their opinions in his Twitter feed at a very rapid rate.

Trump, who is one of the most successful real-estate moguls in the country, has television experience and also announced that he will be hosting NBC’s “Saturday Night Live” on November 7.  He previously hosted the NBC reality program, “The Apprentice,” for a number of years.