“A STRONG CHECK TO THE ADMISSION OF FOREIGNERS” 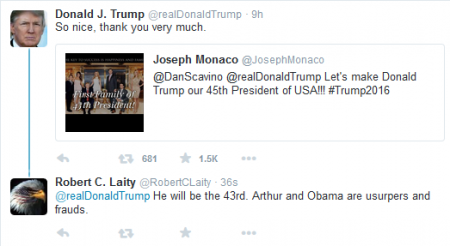 In 2011, while considering a run for the presidency against Obama, Trump pressured the Oval Office occupant to release his “long-form” birth certificate allegedly held by the Hawaii Department of Health (HDOH).  On April 27 of that year, the White House, perhaps in response to Trump’s pressure, released what it said was a scan of a certified copy of Obama’s original birth certificate obtained from then-HDOH Director Loretta Fuddy.

In one Twitter exchange, Robert Laity, a Post & Email contributing writer and author of a lawsuit challenging Obama’s eligibility for the presidency, responded to an individual advocating Trump as the “45th President of USA” by stating of Trump, “He will be the 43rd. Arthur and Obama are usurpers and frauds,” referring to Chester A. Arthur, who is believed by some to have obscured the fact that his father was not a U.S. citizen when he was born, presumably making him ineligible under the popularly-accepted definition of the term contained in Article II, Section 1, clause 5 of the U.S. Constitution which states that the president must be a “natural born Citizen.”

Laity believes that Obama is also a usurper, given that his father was never a U.S. citizen and that Obama’s documentation presumably showing that he was born in Hawaii in 1961 was declared fraudulent by the Maricopa County Cold Case Posse early in 2012.

Earlier in the conversation, Laity retweeted a comment containing the well-known passage from John Jay, a founding father who served as governor of New York and the first Chief U.S. Supreme Court Justice, to George Washington during the Constitutional Convention.

Twitterer “di kele” also cited the Dred Scott case and what appears to be a quote from Emmerich de Vattel’s “The Law of Nations” defining “natural born citizens.”

Later in the conversation, di kele tweeted, and Laity retweeted: 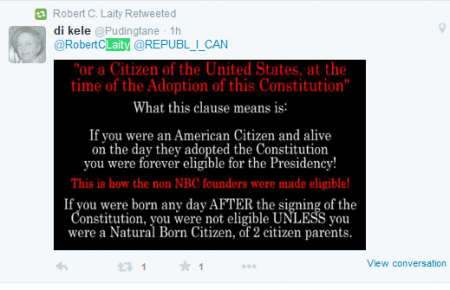 When Trump tweeted, “How can Jeb Bush expect to deal with China, Russia + Iran if he gets caught doing a “plant” during my speech yesterday in NH?” Laity responded by stating, “Obama is a ‘Plant'” and tweeting the title of an article he wrote published at The Post & Email in 2010 entitled, “There is no ‘President Obama.'”