Are There No More Standards in the Media?

(Sep. 24, 2015) — Following a shockingly vulgar comment made on air by Fox News Channel contributor Rich Lowry on Wednesday evening, neither Lowry, who is editor of National Review, nor the management of Fox News Channel appears to have apologized for Lowry’s behavior.

On Thursday, numerous news outlets published articles about the interview conducted by “The Kelly File” host Megyn Kelly with Lowry and another political commentator, Chris Salcedo, repeating the language which Lowry used.

To The Post & Email’s knowledge, The Gateway Pundit was the first to report on the exchange on Twitter on Wednesday.

To her credit, after Lowry uttered the words, which happened to be directed at Republican presidential candidate Donald Trump, Kelly objected by exclaiming, “What did you just say?  You can’t say that.”

However, Kelly made no apparent effort to halt the broadcast or cut Lowry’s microphone.  The interview continued with her other guest, The Blaze Radio Network‘s Chris Salcedo.

Trump, who has been leading in all polls, said that he heard the broadcast, called for an apology from Lowry and for the Federal Communications Commission (FCC) to impose a fine on Fox News Channel for Lowry’s crude statement.

According to the FCC’s website, its ability to fine stations for the use of obscenity or other transgression does not extend to cable channels.  In 2006, CBS was fined $550,000 for airing “indecency” on its 2004 SuperBowl broadcast involving entertainers Janet Jackson and Justin Timberlake.

Following the first Republican presidential debate on August 6, Trump stated that Kelly, as one of the moderators, targeted him for unfair treatment, specifically as to comments he allegedly made about “women.”  Kelly responded at the opening of her show on August 10 that she would not apologize for “doing good journalism.”

She then took what some, including Trump, speculated was an unplanned 11-day vacation.

Surprisingly to this writer, “conservatives” such as HotAir, Ann Coulter, and Ben Shapiro repeated variations of the comment or otherwise did not denounce it as inappropriate for a newscast with a national and international audience.

Lowry appears to be proud of himself for his accomplishment, posting a headline article recapping the incident at the top of his Twitter feed on Thursday with a photo of presidential candidate Carly Fiorina, who Trump has disparaged as having been a poor businesswoman.

Even after refreshing the browser, the article, written by fellow National Review author Tom Elliott, remains the first thing one sees in Lowry’s Twitter history.

Lowry’s comment has been repeated throughout the blogosphere and on “serious” news websites.

The normally soft-spoken Lowry is reportedly a “conservative” who was chosen by William F. Buckley, Jr. to serve as editor of the right-leaning, “conservative” news magazine Buckley founded in 1955.

Trump called upon Fox News Channel to issue an apology and remove Lowry from its airwaves for his “foul language.”  After Trump issued a tweet in response to what he characterized as Lowry’s “unheard of” commentary on television, Lowry responded with a repetition of the term he used on Wednesday night along with the demand that Trump apologize for comments he made about Fiorina.

On September 8, referring to Fiorina, Trump said, “Look at that face” in what was widely seen as an uncomplimentary attack.  Fiorina was then given the opportunity to interview with Kelly about Trump’s comment.  On September 10, Trump said in a Fox News interview that he made the statement because he was “an entertainer” on his reality show, “The Apprentice.”

Politico described Lowry as having “responded to Trump’s barbs,” when in fact, Lowry had begun the exchange which Lowry continued after his appearance with Kelly.  On Thursday, a link from Lowry’s Twitter feed continuously replays the exchange.

While some of Lowry’s Twitter followers criticized him for his behavior and excoriated Fox News, many expounded upon it, including “conservative” pundit and author Ann Coulter, who posted an obscenity about a particular nationality/religion last week.

A commenter at “Twitchy,” launched by “conservative” pundit and writer Michelle Malkin, wrote that Trump’s objection to Lowry’s remark was “censoring political speech on cable.”

Lou Dobbs of the Fox Business Network posted his own video message, using rare slang, in what he considered a word of advice to Trump.

HotAir mocked Trump for “running to the government” after hearing Lowry’s remark.  “Donald Trump is doing his best imitation of the peasants from Monty Python and the Holy Grail,” wrote the “conservative” website.

Breitbart writer Ben Shapiro reminded those in Lowry’s Twitter audience that he had made a similar comment on “the night of the [second Republican presidential] debate, then repeated the comment he said he made (excluded here for vulgarity):

However, Breitbart labeled Lowry as having “no class” and using “vulgarity.”

Joe Concha of left-leaning Mediaite opined that Lowry should be suspended from FNC, stating that “…language like that is prevalent on HBO shows like Real Time with Bill Maher, Last Week Tonight with John Oliver or any Comedy Central political satire show…But Fox is a news organization, just like CNN and MSNBC are. And despite what some of the usual cynics below will tell you, there are standards at these networks. There is a bar. There are things you can say some things you simply cannot…” [emphasis the author’s].

In August 2013, Fox News Chairman and CEO fired his long-time assistant, Brian Lewis, after 17 years at the channel.  Lewis was known for his efforts to build the stature of FNC and maintain its reputation in the wake of any criticism.

On June 21, WND Editor Joseph Farah reissued his five-year-old prediction that “the end of Fox News is near.”  “Give it a year at most,” Farah opined, citing the turning over of the channel’s management by media mogul Rupert Murdoch to his two sons, one of whom was known to be disliked by Ailes.

Trump has continued to criticize Megyn Kelly, claiming that in her role at Fox News Channel, she is “overrated.”  On Thursday, The Washington Post reported that “Donald Trump’s slide in the polls is beginning to look real.”

Trump had been scheduled to appear on Bill O’Reilly’s “The No-Spin Zone” on Thursday, but the engagement was canceled by Fox prior to Kelly’s program going on the air.  In a statement quoted by The Hollywood Reporter on Wednesday, an unnamed FNC spokesman said it canceled Trump because of “personal attacks on our anchors and hosts, which has grown stale and tiresome.”

According to The Hollywood Reporter either late on Wednesday or very early Thursday morning, Trump, Ailes and FNC executives will be meeting next week to “discuss their differences of opinion regarding Fox’s coverage of Mr. Trump’s presidential campaign.”

As of press time, Lowry’s biography at FNC consists of one sentence followed by featured news items. 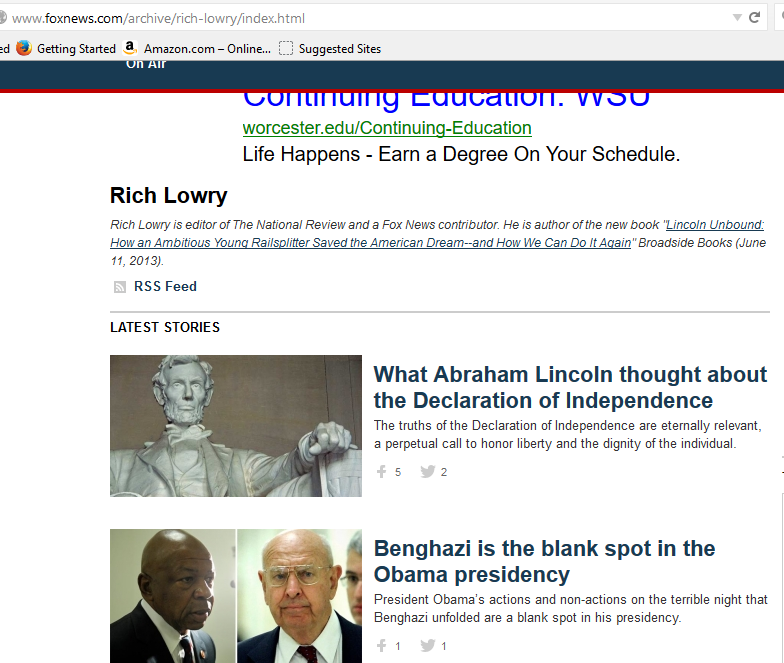 The Post & Email takes no position on candidates for any public office.  Nevertheless, we condemn Lowry’s remark, regardless of its target, as unprofessional, substandard, crude, and unfit for broadcast.

Lowry’s link to the National Review headline article recapping his behavior of Wednesday night remains at the top of his Twitter feed despite hundreds of other tweets posted since this article was begun.  As of publication time, more comments about Lowry’s words appear to be negative than supportive as compared to several hours ago.

Are There No More Standards in the Media? added on Thursday, September 24, 2015

One Response to "Are There No More Standards in the Media?"