(Sep. 24, 2015) — “A standing military force, with an overgrown executive will not long be safe companions to liberty. The means of defense against foreign danger have been always the instruments of tyranny at home. Among the Romans it was a standing maxim to excite a war, whenever a revolt was apprehended. Throughout all Europe, the armies kept up under the pretext of defending, have enslaved the people.” ~James Madison (Emphasis added in all quotes)

“Soldiers were likely to consider themselves separate from the populace, to become more attached to their officers than their government, and to be conditioned to obey commands unthinkingly. The power of a standing army, [Samuel] Adams counseled, “should be watched with a jealous Eye” ~ Professor Christopher Hamner, George Mason University

“A standing army we shall have, also, to execute the execrable commands of tyranny; and how are you to punish them? Will you order them to be punished? Who shall obey these orders? … Will the oppressor let go the oppressed? Was there even an instance? Can the annals of mankind exhibit one single example where rulers overcharged with power willingly let go the oppressed, though solicited and requested most earnestly? … In this scheme of energetic government, the people will find two sets of tax-gatherers, the state and the federal sheriffs. This, it seems to me, will produce such dreadful oppression as the people cannot possibly bear. The federal sheriff may commit what oppression, make what distresses, he pleases, and ruin you with impunity; for how are you to tie his hands? Have you any sufficiently decided means of preventing him from sucking your blood by speculations, commissions, and fees?” ~Patrick Henry, Virginia Ratification Convention, June 5, 1788.

I must confess to an inability to understand so many in this country who refer to themselves as “constitutionalists” yet support and avidly defend those who fail or outright refuse to honor their sacred oaths to our Constitution and Bill of Rights. Would these same people condemn the leaders of organized crime, yet support the enforcers and hit men and refer to them as “heroes” and “public servants” deserving of praise, support and adoration?

The Declaration of Independence tells us the primary purpose of government is to protect and defend the Creator-endowed rights of the individual. How many cops do you think would be needed if all they did was protect our rights as provided in the Bill of Rights? Would they need assault weapons, SWAT teams and MRAPs? 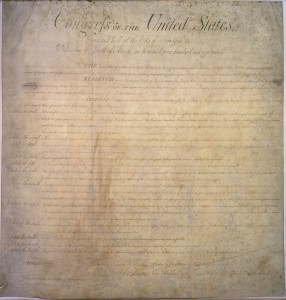 The 4th Amendment to our Constitution has been eviscerated in order to accommodate the “war on drugs,” a totally unconstitutional war if there ever was one. For the doubting Thomases among my readers, answer for me, please, the following question. If, in 1919, it was necessary to amend the Constitution in order to prohibit alcohol sale, distribution and consumption, why was it not necessary to amend the Constitution in order to prohibit the sale, distribution and consumption of drugs? The Constitution has not changed, but the people have; they willingly accept tyranny for “emotional reasons” and honor those who steal their individual rights and liberty as long as that tyranny is directed at another group of people—or another race of people.

The government’s various wars on poverty, drugs and terror have destroyed our God-given rights enumerated in our Bill of Rights while making criminals, politicians (is there a difference) and our standing army quite wealthy, all the while robbing the people of their hard-earned tax dollars.

Although the government wars have been going on for most of my life, the things our government declares war on somehow manage to increase exponentially. Today we have more poverty, more drugs and more terrorists than we had when the various wars on these objects began. Just think, if we had all the money spent on these wars, we would not have a national debt; we would have a surplus as large or larger than our national debt is today.

How does this make sense to anyone with an IQ higher than the average temperature of Colorado at 7000 ft. in October? If you hired a private contractor to rid your home and property of vermin, would you continue to pay them more and more money each year if the vermin increased exponentially after each effort of the contractor? Didn’t think so! Then why do you continue to support the same type of results from government?

It is my contention that between 90-95 percent of all laws passed by various legislatures—and all regulations which are enforced as laws—are unconstitutional. Why, then, should we pay for more and more police and “federal sheriffs” to enforce those laws, laws which destroy our individual rights? Why, too, do we not only tolerate, but continue to elect people to “law enforcement” positions who claim it is not their job to determine if a law is constitutional, but will continue to enforce them until some other elected or appointed government employee says otherwise?  Did we not stand as an authority which executed over 1000 Germans and Japanese for simply “following orders” without questioning them after World War II? What is the difference between the Nazi SS officer or the Japanese soldier on the Bataan Death March and the “law enforcement” officer who blindly enforces unconstitutional laws in this country? Are they not both just following orders?

Did the 74 men, women and children at Waco in 1993 die any less horribly than those who died in the concentration camps of Europe or the Philippines? What about 14-year-old Samuel Weaver or his mother Vicki, or the seven bikers who died in Waco last May from gunshot wounds to the head with the shots traveling in a downward direction; kind-of hard to produce in an alleged wild gunfight in a parking lot.

Speaking of guns and firearms produces another troubling question in my mind. What is it with the Second Amendment crowd and their rabid support for government “law enforcement” personnel? Who were those people going from door to door in New Orleans in the aftermath of Hurricane Katrina back in ’05?

Although I have very little confidence in the NRA, they at least produced a good video on this event. Watch this video and then ask yourself: would any of the folks in this video have said “it can’t happen here” two weeks before it did? Of the thousands of guns confiscated, only the cheap ones were ever returned. Police officers stated during depositions “most of the quality guns” were kept by the officers who confiscated them and were never returned. Yet, not one of these officers was punished for their crimes.

We would not need the NRA or any other gun advocacy group if the people who collect a regular paycheck and wear a uniform and a badge protected our rights instead of following government orders without a thought as to their constitutionality, and then committing felony theft by keeping the guns they illegally confiscated.

The majority of our founders were terribly concerned about a “standing army” which included “federal sheriffs.” It is impossible to refute the position that such a standing army is now active in this country and includes the police; local, state and federal. If you believe for a second those who wear a badge will refuse orders to confiscate your firearms or refuse to enforce a myriad of unconstitutional laws, perhaps you, too, will someday be in a Youtube video explaining why you no longer believe or support the army of occupation in our country known as the police—if you survive the encounter.

One Response to "An Unholy, Unhealthy, Freedom-Destroying Relationship"