“SUBJECT TO THE JURISDICTION THEREOF” 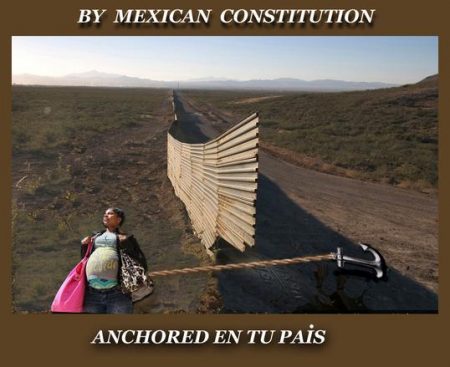 (Sep. 5, 2015) — Pundits on both sides of the Anchor Baby dispute speak authoritatively on the issue but vehemently disagree.  This leaves many confused about which way the constitutional weight swings.  Those of the opinion that babies born here by mothers who entered the country illegally are entitled to citizenship and its privileges cite the 14th Amendment as the basis for their argument.  Those that oppose the automatic citizenship of anchor babies argue that the 14th Amendment has a caveat that negates the argument of their opposition.  To properly assess the situation, the 14th Amendment may not be the only official government document that should be taken into consideration. And a question needs to be asked. Is birth alone a qualification for citizenship?

Perhaps the truth can only be understood by studying several documents in concert and the terms contained within them that have a bearing on the issue.  These documents are  Article 37, Paragraph A of the Mexican Constitution, the Civil Rights Act of 1866, and the 14th Amendment.

Article 37, Paragraph A of the Mexican Constitution clearly and succinctly states:
The Mexican nationality by birth shall never be revoked. (emphasis added)

At the time this was written, it prohibited any Mexican national (someone born in Mexico) to revoke their Mexican roots, which entitles them and their children to lifelong citizenship and precluded them from becoming expatriates as we understand that today.  In other words, once a Mexican, always a Mexican. However, as of 1998, Mexico joined several other Central and South American countries in recognizing dual nationalities. This allowed Mexican-born people as well as their children born in other countries to maintain their Mexican ties if they so desire while becoming citizens in another country.

On the other hand, the United States (pre-Obama) did not encourage dual nationalities.  During naturalization ceremonies, foreign nationals becoming U.S. citizens were/are required to swear an oath prescribed by law that renounces loyalties to other jurisdictions.  I have to say “were/are” because the rules for naturalization exist but in some cases are not honored – as are a good number of our laws. This begs another question.  If someone goes through the naturalization process but all the legal requirements are not met, is that person legally a citizen?

Understanding the distinctions between a national, a citizen, and those possessing dual nationalities is key for anyone wishing to understand the current question of whether or not babies born here “anchor babies” should automatically be given citizenship and all the benefits thereof.  The children of foreign ambassadors also places another cog in the wheel of understanding.  If they have children born in the  United States, those children are not considered to be American nationals but nationals of the country the ambassador represents.

Basically, nationals are people who are born in a specific country.  There are rules and regulations in most countries that provide a legal system  for foreign nationals to be “naturalized”  in the country they are residing in if they choose to become citizens of that nation. The difference between a citizen and a foreign national living in another country is that citizens have full political rights, including the right to vote and to hold elective office.  Additionally, naturalized citizens in the United States were/are required to swear an oath that renounces loyalties to other jurisdictions.

Before we can put all of this together, we need to understand the Civil Rights Act of 1866 and its historical setting.  At the end of the Civil War the slaves that were freed under the Emancipation Proclamation were not considered to be citizens.  Therefore, Congress had to intervene and create a remedy for this particular situation.  Their remedy was the Civil Rights Act of 1866.  The part that is relevant to this issue states:

The  phrase emboldened above is critical to this understanding.  First, the freed slaves were already nationals who were born in the United States but they did not automatically become citizens, and the second part of that phrase stated a caveat: that this applied to nationals who were not subject to any foreign power. This sentence was constructed with purpose.  It deliberately excluded any foreign nationals from automatically becoming citizens just by the occasion of their birth.  Slaves who met these two conditions were given citizenship. I must repeat this again because it is so important:  nationals and citizens are two different categories of people…and…in order to become a citizen, the slave – or anyone else, since the sentence reads “all persons” could not be subject to any foreign power.

Because the Civil Acts Right of 1866 did not solve all the problems the freed slaves were facing, Congress wrote and the states ratified the 14th Amendment, which is under dispute today. It is important to understand that the 14th Amendment was written to codify the Civil Rights Act of 1866.

Once again, the terms “all” and “naturalized” are important to note in the Amendment.  The persons that were naturalized went through a process of naturalization and could not be subject to any foreign jurisdiction.  Birth alone was not then and is not now an automatic rite of passage. Children born here to foreign nationals (as is the case with children of ambassadors that may want to become citizens) have to be naturalized in order to become citizens. And part of the process of naturalization requires being subject to the United States only and taking an oath that renounces loyalties to foreign nations.

To make it clearer, the legal definition of  “nationality”  is the legal relationship between a person and a state.  A national of a country is subject to the state’s laws, even while not physically present in the state, in exchange for the state’s protection, and other rights. The definition also states that nationality is the state of a person in relation to the nation in which he was born.  However, it goes on to say that a man retains his nationality of origin during his minority, but as in the case of his domicile of origin, he may change his nationality upon attaining full age;  he cannot, however, renounce his allegiance without permission of the government.

Again, nationality was a prerequisite for the Civil Rights Act of 1866 and the 14th Amendment – but it was not the only  prerequisite.  Jurisdiction was and is also a factor.  Jurisdiction is defined as the territory over which legal authority is exercised.

Therefore, simply being born in these United States does not automatically confer citizenship on the child that was born here.  In order for that child to become a citizen of the United States, they must be of full age, go through the naturalization process, and swear an oath that renounces their loyalties to any other country – especially since countries such as Mexico allow their children born abroad to maintain their Mexican ties if they so wish and the 14th Amendment does not allow naturalized citizens to be subject to another jurisdiction.

Anchors Away added on Saturday, September 5, 2015

2 Responses to "Anchors Away"