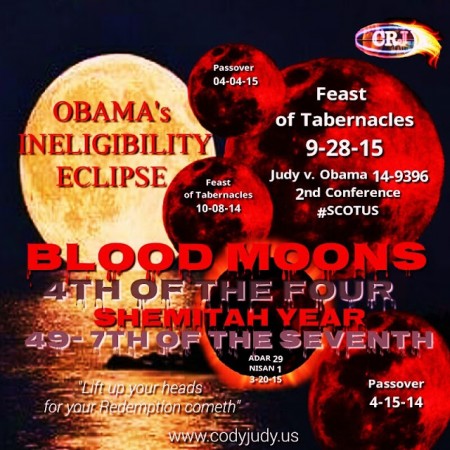 (Sep. 3, 2015) — Today, let’s talk about some spiritual things. I notice the word spiritual rather than any particular religion. We know there are many different religions and those not acknowledging the formality of  a church would recognize something they do religiously as a repeated process thus they are also effected by it. We eat, drink, and sleep.. religiously.

That’s the short way of saying, if you think this has nothing to do with you, think again and broaden your narrow focus in to something you could claim to be proud of because you demonstrated a broad spectrum for Truth.

God has blessed you with many spiritual efforts, concerns, and love. These are gifts. Truly we are living in the times of Revelation- Wondrous times- Awesome Times.  What I have found and believe might be a wonderful way of broadening the focus you may say is Cody Robert Judy, is by rather deferring to others who have pieces of the pie that we can bring together in and for a wonderful feast.

It would be my prayer that this is seen as macro recognition of Truth rather than micro hoarding of the Truth to any specific person, more particular myself, that perhaps might bring up resentments in you. God forbid such a pitiful state of recognition of truth based on a single identity. Indeed, we see God blessing wonderfully so many people and that truly is a beautiful scene to me and for me to appreciate.

‘Tis not the accepting of any Truth that we are judged by God and ourselves, but ’tis the denial of Truth that is or was plain which will condemn a person. This is why a Record is so very important for it is by what is written that the Nations will be judged and saved.

The interesting perception of Judgement and those not wanting to be Judged is they are by the very instrument they pretend to despise effecting and affirming their own witness to Judgement. Those protesting might be well served in that they might rather say we do not want to be judged wrongly or convicted falsely, for there is nothing under the sun that is not judged; some liked some not so liked.

My hope and self-defined purpose in this is to promote a well-balanced and magnificent Love I have come to know as Jesus Christ and his willingness to pardon in a process we call repentance made only possible in the balances of justice by his suffering for the wrongs we may be pardoned of upon asking for such and committing even our whole desire towards in a plea for mercy and grace he has stored in his heart for us.

If you do not have a commercial break, you know that someone has paid the price for all the commercials that normally would have been included. We also know and put up with commercials because we know someone has to actually pay a price for the program. If we look at commercials as an invitation we can accept or reject we understand we are the buyer and they are catering to us. If you look at that way it cannot be totally resented as would you rather be catered to a little or totally ignored?

You may think being ignored is ‘all that you’d like’, as you escape to read your favorite book, but that’s only for a little while. Remember that book was brought to you by some form of advertisement. Every gift is also an advertisement even if its from Mom and Dad. Yes, they may like you, but they also want you to like them.