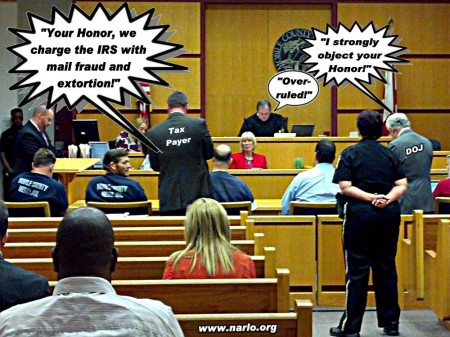 (Aug. 30, 2015) — It seems not a day goes by without more stories of the IRS’s incompetence, gross negligence and outright criminal behavior.  Somehow a Russian got into the IRS computers and stole the private, personal data of over 300,000 taxpayers.  The IRS is going to give the 300,000 free credit monitoring.  WOW!

The IRS paid out over $5,000,000,000 (billion) in fraudulent refunds. What part of that $5 Billion was your tax money?  Lois Lerner is not in jail and the IRS is still targeting conservative groups.   Congress is investigating and the people are wringing their hands in outrage.  The President asserts there isn’t a smidgeon of evidence of wrongdoing at the IRS.  In spite of the President’s absolutely ludicrous assertion, the negative press and overwhelming evidence of obstruction of justice and other crimes continues unabated and no one gets fired or goes to jail.  Justice may be blind but it is also slower than a snail on a vertical climb.  Or maybe, just maybe, there is no justice at all when the government is the perpetrator, its having sovereign immunity, you know.

The borders are still wide open and lately there has been a string of murders by illegal aliens who cross our borders multiple times after deportation and the government does nothing about them.  There have been over 600,000 crimes committed by illegal aliens in Texas alone.

The VA is still a mess and the new boss has fired only one person since he took office over a year ago.  Meanwhile, veterans are still being treated like cattle on a cattle drive.

A stupid Northeast college comes out with a list of words not to say and one of those words is “American” because it might offend a non-American.  This isn’t a joke.  When does this insanity stop?

Public schools have become government-run, social, environmental and collectivist indoctrination centers.  The government borrows 42 cents of every dollar it spends.  ObamaCare was and is a lie and will eventually send America into bankruptcy.  Man-caused global warming is a planet-wide con.  The president likes Muslims over Christians and makes weird deals with our Muslim enemies that only Neville Chamberlain would endorse.

National and international radical environmentalists have taken over America to the point where environmental law trumps constitutional protections of property rights and due process.  Environmental law, the EPA and the Endangered Species Act have raised the price of everything by several magnitudes and have become so insane that you will go to jail if you kill a grizzly bear or a wolf to protect your family or your livestock.  No wonder the motto in the west is “Shoot-Shove-and-Shut Up.”  Now the EPA wants to drive the cost of energy through the roof for the boogieman of man-caused global warming.

Generally, the U.S. is bubbling along like a frog drowning in a septic tank and nothing changes.  It’s only gotten worse and worse with every passing day.  Will “the Donald” solve everything?  Don’t be ridiculous!

We grow weary of people sitting on their hands and watching in horror ….. but doing nothing.  And ladies and gentlemen, the “frog” is going to drown if Americans don’t stand up by the millions and put on the brakes.  Obama and the Democrat Party have become enemies of a free people and they have led us into a Saul Alinsky, Cloward-Piven and Marxist-socialist nightmare of growing enslavement.

When are we going to get it!

Many of our readers know of our difficulties with the IRS.  We have won a couple of battles with them and lost one.  But now we are going to take on the biggest battle of all for that one loss, at great personal risk.  They have purposely ignored all of our communications and they have defaulted upon and dishonored our legal affidavits.  They have sent us letters in the mail with no signatures, threatening seizures of our bank accounts and other assets.  Their actions and illegal seizures against us have reached the point where we have no other choice but to charge them with mail fraud, extortion and violation of our civil rights for seizing money from us for a “bogus” infraction of the Internal Revenue Code and using the ‘ole “frivolous position” chart to support their claims.  But a legal affidavit is not a frivolous position under the IRS Code and they know it.

They have even tried to collect taxes we have already paid and they have charged us penalties for failing to file when they know damn well we did file.

What they are doing to us, for multiple years, goes well beyond simple bureaucratic bungling, harassment, intimidation, or gross negligence; it is outright fraud and extortion.

On August 19, 2015 we forwarded a Certified-Return Receipt Requested letter and a companion affidavit delineating the charges against them and requesting independent investigations from the FBI, the IRS Inspector General and the Post Office Inspector General.  Copies were sent to the U.S. District Attorney in Seattle, the IRS Commissioner, IRS Chief Counsel, the Treasury Secretary and the District Directors of all of the IRS offices that have harassed us over the last four years.  We have even named sixteen (16) specific IRS agents to be investigated by the three oversight agencies.

In the Affidavit we state the following:

“Given the flagrant disregard for the AFFIANT’S rights, due process and the law, the AFFIANT charges the IRS with 1) multiple counts of mail fraud under 18 USC, Chapter 63, Section 1341; and 2) multiple counts of extortion under 18 USC Chapter 41, Section 872; and 3) violation of AFFIANT’s civil rights under 42 USC Section 1983.  In addition, the AFFIANT charges individually, sixteen (16) alleged IRS Agents that communicated by U. S. Mail, thereby continuing the pattern of IRS Mail Fraud, Extortion and violating of AFFIANT’s civil rights, along with harassment and intimidation.  A list of the sixteen (16) IRS agents so charge is attached hereto and made a part hereof by this reference.  We further charge the IRS with arbitrary and capricious behavior, in addition to open and notorious violations of the “IRS Tax Code”, the US Code, “The Uniform Commercial Code“ (UCC), “The Restructuring and Reform Act of 1998”, the “Fair Debt Collection Practices Act” and “27 CFR § 72.11.”

REQUEST FOR INVESTIGATION AND REFUND

“The AFFIANT hereby respectfully requests the oversight agency addressees shown in the attached letter of even date, to conduct separate and independent investigations of mail fraud, extortion and violation of the AFFIANT’s civil rights allegations against the named IRS agents and the IRS agency itself, in response to this referral of charges and these independent investigations are specifically to include the sixteen (16) herein named IRS agents that the AFFIANT alleges are complicit and co-conspirators in the alleged crimes.   The list of said sixteen (16) IRS agents appears on Page 5 of this AFFIDAVIT.”

“The AFFIANT further requests the alleged taxes due for Calendar Years 2011, 2012 and 2013 be reduced to zero for the reasons herein given, the immediate cessation of the 15% seizure of our Social Security benefits and return of all such stolen benefits, including a 5% APR simple interest charge.”

Ladies and gentlemen, we can’t guarantee one or more of the investigating agencies we sent our letter and affidavit to will do anything.  It may even backfire on us.  Nevertheless, we couldn’t just sit by and let them run all over us.  If you are interested in what we have done, you can read our letter and affidavit on the IRS INFO page of the NARLO website, HERE.

Only the Clintons and government agencies can get away with criminal behavior and never pay a price, and thus we say, “So much for equal protection (or enforcement) under the law.”  Equal protection and enforcement only applies to us citizen schmucks who cower in the corner out of fear of government.

In contrast to the rest of the population, we were never very good at cowering and we always confront the bully, no matter how big he is, because if you don’t confront the bully, the bully owns you.  How many of you feel like you ARE OWNED by the IRS and all of government, at every level?  This is a sad state of affairs in an allegedly free country.

Which of you will confront the bully?

“How To Poke the IRS in the Eye and Win.”

“Why Congress Will Never Repeal the IRS“

WARNING!  We are not encouraging, suggesting, advising, our counseling anyone to do what we have done, or violate the law in any manner.  What we have done is to simply tell our story.  What we have provided with this story is for informational purposes only and is meant to be nothing more than an adjunct to that story.  It is not to be relied on, or acted upon.  If anyone does act upon this information, they do so at their own risk.

We’ve Charged the IRS With Mail Fraud and Extortion added on Sunday, August 30, 2015