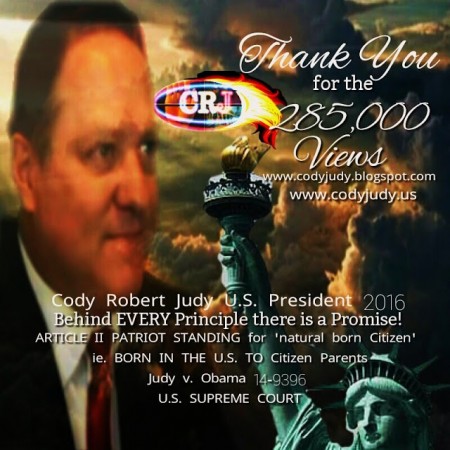 (Aug. 28, 2015) — There are a lot of opinions about the ‘natural born Citizen’ and what it constitutes and how it is distinct from the qualifications of a Senator or Representative in Congress, but not many delve into the “Why” a ‘natural born Citizen’ was authored with an iron pen into the United States Constitution only for the position of the Commander-in-Chief  which is the Office of the President.

Of course you’ve heard the “How” – The man who would become the New Nations very first United States Supreme Court Chief Justice John Jay wrote July 25, 1787 a letter to the influential Commander of the American Army General George Washington while in the deliberations of the Convention drafting what would become the U.S. Constitution and said, “Permit me to hint whither it would not be wise and seasonable to provide a strong check to the admission of Foreigners into the administration of our National Government; and to declare expressly that the Command in chief of the american army shall not be given, nor devolve on, any but a natural born Citizen. “

Of course this was taken up and ratified by the States present and it has remarkably lasted even through modern times and eight attempts since 2003 to change it. So what is the Key to its value. A friend of mine recently offered a wonderful insight in that there are two sides of a coin that look entirely different, but as they come together in one, there is a ‘value’ assigned to them. This is similar to the two pronged description of ‘natural born Citizen’ ie. Heads- Born in the U.S. to Tails of Citizen Parents.

Similarly, a coined statement provides a reward- you may have heard- Your Feelings are nothing, but Behind every Principle there is a Promise. Of course this takes into account ‘feelings’ are like the tide washing in and out. They change daily. However, Principles do not. They are fixed, solid, like the post of a Pier the Ocean is free to encircle. The Principles are our safety or firm foundation.

So, what exactly is the Promise to Americans if they will hold the Principle of the ‘natural born Citizen,’ i.e., born in the U.S. to Citizen Parents in the Office of the President? This question pondered gets into the all important “Why” of the Principle. These are the considerations of many Legislatures presiding in American Congress’s that when asked to change the ‘natural born Citizen’ qualification of the president, said “No”.

Oh, But Why?
There are many Candidates for President who are terrific Leaders and have been very good in both Government and Business that we would call highly successful. In fact I recently had a Democratic County Representative write me and tell that I should get behind one of the Main Stream Candidates after he posed that he thought I must be a joke.

I keep my eye on quite a few of the Republican Candidates and recently saw an interview that Bloomberg conducted with Mr. Donald Trump where he was asked if he liked the Bible, if he had a favorite verse, whether he favored the Old Testament or a New Testament. As I watched Mr. Trump devolve into the recess of generalities rather than specifics on the subject I thought of course he is playing it safe, and it is easy to do on the subject of the Bible. If he takes the chance of specifics, he risks alienating segments or particulars of Christianity.

Many principles we have today, you can see in both the Old and New Testament that a lot of people think are a pretty good idea. These Principles outlive feelings and exist in a multiple generational time frame. In fact, there are 10 Principles you can find in the Ten Commandments and Prohibition failed to last in the Constitution. We understand ‘murder’ and ‘stealing’ is not very good as a principle or way to run our lives.

Some of these principles are very obvious because they have an immediate cause and affect. Some of the harder ones to see might have a prolonged negative effect that isn’t as easy to see as the horror of someone laying dead in the street. Most professional politicians are really good at jumping on the ‘immediate principles’ because they are very easily recognized and easy to place a solution or conclusion to for immediate popularity. It’s easy to jump on a ‘feeling’ bandwagon when ‘feelings’ are running high and you’ve just had a particular loss.

Hillary Clinton come out in a statement against guns due to the horrible shooting of the nine members of the church shot in NC and reiterated it again about the TV Reporters shot yesterday in Virginia. Why does Hillary Clinton require the Secret Service to wear guns to protect her? She certainly will not give those brave men and women up. She’s scared to act by example first giving her guns up and then ask others to. She wants to disarm you first and then she’ll think about it, but I’m really guessing she wouldn’t. Self-Defense is a principle that has lasted quite a long time.

The “Why” of a principle is also the ‘Cause’ or value of it. Why is it important that the ‘natural born Citizen’ clause be upheld? Well, in John Jay’s letter to General Washington the why was to keep Foreigners out and that of course was seen as the fear of being snuffed out by Traitors who would not hold the american nation up and allow it to survive. The inclination was we were threatened with extinction and our Principles would not be upheld if loyalty against the United States prevailed to some other foreign nation’s desires.

Benedict Arnold was a character in our History who obtained a post in the Army who was loyal to Britain. When the opportunity come about he planned to surrender his post to the British, but it was found out. He was relieved of his command and took up with the British in September of 1780 as a brigadier general. Most Media sources claim that there is no such thing as a Benedict Arnold in today’s modern United States. That means we are really and truly not desired by the World or any other Nation?