BUT WHAT IS THE TRUTH?

A shorter version of the story appeared in the Aberdeen (SD) Daily News, with just a head shot of Obama under the title, “First Black President.”

The references were to Obama’s having been elected president of the Harvard Law Review, a scholarly journal run by law students officially launched in 1887.  The “About” page on the publication’s website indicates that columns are typically “unsigned” because they often represent the collaboration of several student authors.

On January 26, 2007, the AP reported, as published in the Rockford (IL) Register Star, that “Obama…moved to Indonesia at age 6 to live with his mother and stepfather, attending schools in the country until age 10…”

Accompanying the 2007 AP article was a photo of a group of children  described as “undated” and depicting a graduation ceremony.  The photo is captioned “THE ASSOCIATED PRESS” and reportedly was obtained from the school Obama attended at that time, identified as “SDN Menteng School1.”  Obama is indicated to be at the back of the group of children by a superimposed circle.

The photo shows a thin-faced boy who appears to be biting his lip, while other purported photos of Obama with his Indonesian family during the same time period show him as relatively heavy for his age with a broad smile.

The 2007 article focused on the allegation that Obama had attended a “radical Islamic school” while living in Indonesia, with its unidentified author citing “conservative internet blogs” such as “Insight” and “Fox News Channel” as having “spread the charges just as his candidacy was getting off the ground.”

The article was dated January 26, 2007, and Obama did not announce his candidacy for the presidency until February 10, 2007.

In December 2007, MSNBC commentator Chris Matthews stated that Obama was “born in Indonesia” and possessed “an Islamic background.”  In 2010, Obama reportedly told then-Egyptian Foreign Minister Ahmed Aboul Gheit that he is a Muslim.

On Friday evening, The Post & Email contacted the Associated Press about the discrepancy between the two articles. 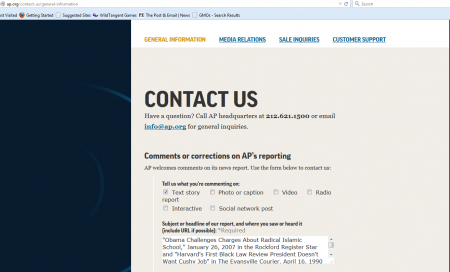 After submitting our query, we received the following acknowledgment: 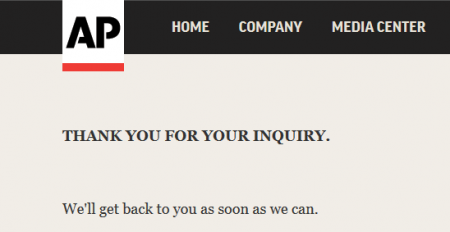 Late last year, The Post & Email located an article published in The Washington Post on June 30, 2008 which reported that Obama was “raised in the Kansas heartland,” contradicting both of the AP reports.  Award-winning writer Eli Saslow additionally wrote that “false rumors about Obama have built enough word-of-mouth credibility to harden into an alternative biography. Born on the Internet, the rumors now meander freely across the flatlands of northwest Ohio — through bars and baseball fields, retirement homes and restaurants.”

Saslow described the residents of Findlay, OH as a tightly-knit community of working- and middle-class people whose “patriotic displays had grown into an unspoken contest of one-upmanship.”

“But with their pride came a nasty undercurrent, one that Obama’s candidacy has exacerbated: On College Street, nobody wanted anything to change. As the years passed, Peterman and his neighbors approached one another to share in their skepticism about the unknown. What was the story behind the handful of African Americans who had moved into a town that is 93 percent white? Why were Japanese businessmen coming in to run the local manufacturing plants? Who in the world was this Obama character, running for president with that funny-sounding last name?” Saslow mused.

The story reportedly appeared on The Post’s front page.

Months ago, The Post & Email contacted The Washington Post to ask about the “alternative biography” presented by Saslow that Obama was “growing up in the Kansas heartland” as a child.  After receiving an automated reply, we heard nothing more.