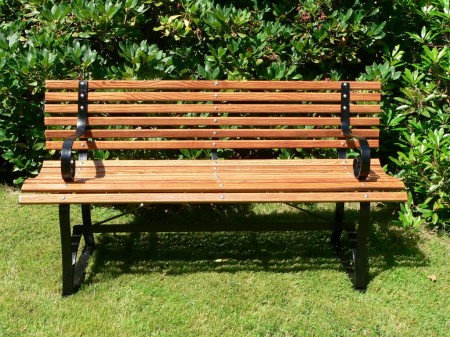 “You forgot the squirrel food again. How many years you’ve been coming to this park to sit on this very bench? I’d say every morning, excepting weather and being incapacitated, of course: twenty years?”

“See the news last night? It’s gotten to the point where, if I see or hear the word ‘pundit,’ I hit the ‘mute,’ change channels, hit the ‘OFF,’ or go looking for my gun. They say that Elvis used to shoot his television sets when he heard or saw something he didn’t like. Must be nice to be rich.”

“That I wouldn’t know, but I’d have a whole wall of televisions and spend all day shooting them.”

“Not me. I’d be more selective and discriminating, so I’d limit myself to one big screen, I mean a six-footer, minimum, a day and use a shotgun: 12-gauge, double-barrel with skeet-shot.”

“Good idea. Do they make silencers for shotguns? I wouldn’t know; you were the one with military experience. I like the shotgun idea but I think the busybody across the hall would complain.”

“She still cracks her door every time you leave or return?”

“Every time, so what I do now is just, whenever I pass by the door, open and close it real quick. Pretty clever, wouldn’t you say?”

“Oh, for sure: very clever. You need to get yourself a hobby. Why don’t you get one of those paint-ball guns and shoot the TV with that, then you could spend all your time cleaning up; at least you’d be accomplishing something.”

“Can’t do that; that would spoil the whole idea of being retired.”

“And what, pray tell, is the idea of being ‘retired?’”

“Why, to do nothing, of course. Or as little as possible.”

“I think God made squirrels for old men like us; gives us something to do.

“Why can’t they find pundits from the Midwest? Why do they always have to come from somewhere in the proximity of New York?”

“Because they’re in-bred, is why. Oh, I don’t mean it in the physical sense, I mean it in the philosophical sense. It’s why we call the CIA ‘Christians in Action.’ They’re not necessarily Christian, but they give the impression of being ‘do-gooders,’ and we know what the world thinks of them.

“They’ve got this ‘Higher-than-thou’ mentality.’ It’s like that Harvard law professor, the Jewish guy, who admits that he voted for Obama twice. And here we are, not even Jewish, and even we know better than not to have voted for a Muslim, I mean, ‘Hussein?’ I mean, how obvious does it have to be?

“And this philosophical in-bred thinks the Democratic Party hasn’t morphed into some sort of National Socialist Party, like the Nazi Party. The idiot.”

“Oh, but you can’t call a pundit an idiot, even though he very well may be.”

“Is. That would somehow be ‘racist’ or some such nonsense. No, these so-called ‘pundits’ don’t have a clue. All we hear is ‘burn-out’ and ‘no substance;’ ‘He’ll be gone in September;’ and my favorite, ‘He’s not what the people want.’ Out to lunch, every one of them. Why, the difference between a Republican ‘strategist’ and a Democrat ‘strategist’ is the spelling, and that’s it. Makes my blood boil.”

“And he’s pulling away!”

“Ha! And still they don’t get it; haven’t a clue. Why don’t they have us on, the “Park Pundits.’ We’d tell them, word for word:  ‘He’s just who AND WHAT America needs at this time.’ Trash everything Obama has done, and that’s just the first day on the job. Day 2 is to kick the illegal immigrants O-U-T.”

“You mean ‘anchor babies’ has been wool over our eyes?”

“Yep. Hey, what you say we go across the street to the mall?  They’ve a sport store there; maybe we could pick ourselves up a couple of paint-ball guns? What you say?”

And the two old men get up and shuffle away.

One Response to "The Park Bench pb"