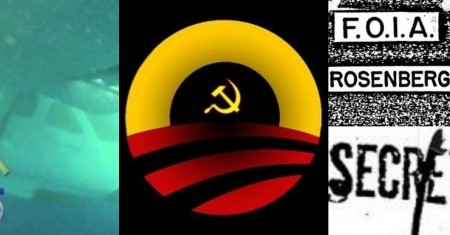 What do a Cessna in the blue waters of the Pacific Ocean, an Islamic cult, a Chicago family, and a Soviet spy ring all have in common with a sitting U.S. President?

Strap yourself in for an unsettling espionage action-thriller that sounds like a Tom Clancy spy novel. But this cloak-and-dagger exposé is non-fiction. Political non-fiction.

The perplexing sequence of events begins as a Cessna carrying nine people inexplicably descends into the Pacific Ocean off the coast of a Hawaiian island. A passenger wearing a lavender sweater appears calm during the final seconds of flight. The plane enters the water. Some will later speculate the unusual circumstance was a controlled water landing made to look like an accident.

The passengers and the pilot patiently exit the plane as the cabin becomes flooded with water. The passenger in the lavender sweater appears to the others to be alive and well. This passenger is observed floating in the ocean, wearing a life jacket and showing no signs of distress.

Oddly, another passenger documents the entire event with a GoPro video camera. The video never reveals the face of the passenger in the lavender sweater, who will soon become the focus of a mystery.

This passenger apparently ends up dead about an hour later.

Even more baffling is the fact that no one else on board the Cessna Caravan died.

Do not assume that you can simply look up the National Transportation Safety Board (NTSB) final report to find out what happened. The incident is “under investigation”… almost two years later.

Now for a little bit more about this dead passenger. The deceased was the former leader of the American branch of an Islamic cult that originated in Indonesia.

Through the Islamic cult, the deceased was connected to a very interesting couple from Chicago.

The husband from this Chicago couple is an expert in Soviet propaganda. He is a professor at a university in Chicago. A university where a another professor was a domestic terrorist and a self-described “communist revolutionary.”

The husband attended meetings in Chicago and China with a graphic designer who created a very recognizable circular logo for a famous politician from Chicago.

The father of the graphic designer who created a very recognizable circular logo for a famous politician from Chicago lived in a commune with members of the American branch of the Islamic cult.

The wife from this Chicago couple was friends with the deceased. The wife became the leader of the American branch of the Islamic cult too; just like her friend who purportedly perished in the Pacific Ocean.

Now it turns out that back in the 1940s, the FBI was extremely interested in the parents of the husband from this Chicago couple.

When this Chicago husband, professor, and Soviet propaganda expert was a young boy he lived with his parents near Washington D.C.

The FBI had the father under government “technical surveillance” through a judge’s secret order. The FBI monitored his phone calls.

The FBI listened to his father getting chewed out by a Soviet spy for “questioning him over the telephone.” The spy then told the boy’s father “to bear in mind from where he was talking.”

The Soviet spy was part of an espionage network penetrating the highest levels of the U.S. government.

This Soviet spy ring had many agents working at American public libraries, scanning local newspaper obituaries to obtain the names of recently-deceased babies. This Soviet spy network then used the names of these dead babies to create fraudulent identities in order to obtain counterfeit U.S. passports.

These fraudulent passports were used by the communist spy operation to bring additional Soviet espionage agents into the United States.

The FBI eventually had 26,000 pages of files on this ring; the ring which also stole atomic bomb secrets from the Manhattan project.

Read the rest here or here.