The Light at the End of the Tunnel pb

“BRING BACK OUR RAIL SYSTEM” 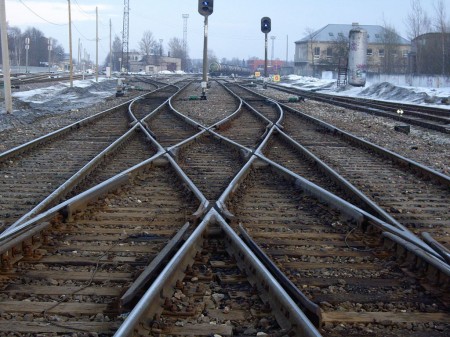 (Aug. 14, 2015) — “There used to be lots of songs written about trains. When the steam engine was placed on a platform and wheels stuck on, you had to have one heck of a hardy road to take the weight of all of that iron, water and wood or coal. We don’t know the person’s name who invented the rail system, but if we traveled back in time maybe we could learn a thing or two. Come with me now and let’s take a trip. Won’t take long, just a handful of paragraphs.

“And off we go and here we are. Looks like some sort of wharf. What are all these people running around for?

“Excuse me! Excuse me, sorry to be rude and waylay you as I am, but what’s going on? I thought I was to see the invention of the rail system take place. Where are we?

“In Boston, sir, on pier #3. What’s going on is there’s no diesel fuel for the engines, sir, so the ships can’t make the propellers turn, which is why everyone’s running around looking for a steam ship that can handle cargo. Trade must continue if we’re to make any money, you know. Bye.”

“Huh. Well, live and learn. In all of my history lessons I never heard that one. But enough of that, we’re here for some railroading history. Let me fiddle with my little time-travel gizmo and get us about a hundred years or more earlier and see if I get it right this time. Maybe go to England.

“Ah, that’s better. See? We’re in a large barn with a train engine and that must be the person we want to talk to.

“Excuse me, but are you the invention guy, about the rail system?”

“What? How you get in here? I locked those doors myself, I did, this very morning. Well, you’re already in so maybe you could give me a hand trying to figure it all out. You’re right, Gov’nor, you know, I am inventing the rail system, but it’s been hard, backbreaking work, I tell you. Here, let me show you. It’s all in the balance, I figure.”

“What the…? Why, you’ve got only one rail, you fool. You mean you’ve been trying to balance the train on one rail? I’m sorry, but we’re going back to our own time, like now. You never saw us; we were never here.

“Sorry about that. A bit wacky, what? But all is not lost, perhaps, after all. If we could learn from what happened in Boston, maybe we can help ourselves and maybe some others along the way.

“You see, what made our country as great as it is, or used to be, is our rail system, or what used  to be our rail system. But nowadays there’s so much money to be made from government contracts that if you’re one of the ones that are in the ‘in crowd,’ you make all kinds of money.

“Here, let me explain. I guess the easiest correlation would be about drugs and crime and the “revolving-door” policy of justice. What would happen, just for argument’s sake, if all of a sudden there was no crime? Stealing ended; prisons weren’t Islamic terrorist recruitment centers; politicians didn’t lie; what then? The money would stop flowing, is what. There’s money, lots of money to be made from people being arrested and incarcerated.

“So what about the fuel for the long haulers, the semi-trucks, and the tires and the roads? Money, lots of money for all of that stuff, you know. Almost like there was a conspiracy against railroading, so one heck of a lot of money can be spent building and maintaining  the whole infrastructure, basically the whole highway system of our country: roads and bridges. Weight kills the highways; why, take away the big trucks and our roads would last almost forever. What if our railroads were used in a rational and efficient manner? What if someone in Washington had a brain; what then?

“What if our rail system rivaled anyone else’s? We’re not #1 rail-wise; heck, we’re not even in the top 10, we’re so far behind.

“But that’s not the point I’m trying to make. The point is that, like all the engines in the ships not working because there was some kind of fuel shortage, they had to rely on a simple mechanical form of energy to get the job done, to trade, to make money, and to deliver the goods.

“Today, in the Year of Our Lord, 2015, we’re even more helpless than we were in 1950. You see, every so often, actually more often than not; I mean, it happens more often than that earthquake in New Madrid, Missouri, our sun spews out a granddaddy of a solar flare that has enough energy to fry the electric grid, and if it’s aimed at us, kaput! Our energy grid gets fried, just like an egg. But here’s the point: one day we’ll get hit and hit hard by the sun, or else some damn fool will explode a nuke above Kansas and fry the whole country’s power grid.  Your electricity goes out, and so does everyone else’s. No planes flying, no trucks delivering goods, and so on; you get the picture. We’ve all heard the horror stories all too well: the electronics got cooked.

“I’m here to tell you that we can get ahead of the eight-ball before disaster strikes. Be proactive rather than reactive. First, bring back our rail system to rival any other in the world. And then refurbish and make new all of our old steam engines that have been lying around just growing rust for the last 70 years. Have them all spit-shined and ready to hit the rails in case there’s an EMP that will fry the daylights out of the diesel engines of today.

“Those old steam locomotives are immune to even the strongest zapping by an EMP. I’m saying let’s, for once, use the brains that the Good Lord gave us. It’ll never happen with Obama; heck, he’s had 7 years to get it right and he hasn’t gotten anything right yet. Same goes for all of the others. Now Trump and Carson? You know what?  There actually may be some light at the end of the tunnel after all.”