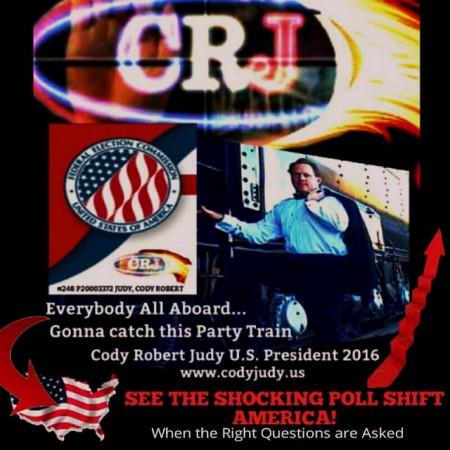 (Aug. 13, 2015) — Polling is a a bit of science and also a bit of influence. June 22nd, 2015, not even two months ago now, a previously unelected Candidate for public office Mr. Donald Trump entered the race recognized as Candidate #511 with assigned Federal Election Commission (F.E.C.) No.  P80001571 and in less than two months zoomed to the top of Republican Polls. On the same F.E.C link notice Mr. Cody Robert Judy also previously unelected is known as F.E.C Candidate #248 with No. P20003372

Many different organizations conduct state and national political polls when they are commissioned to do so by their customers. These customers can include the Candidates themselves as well as other interested organizations who pretty much do not have the time to do it themselves. There are many different methodologies as well as controversy about which method is most accurate.

To conduct a Poll just about all you need is a list of questions and some time yourself to do it. Of course the motive for conducting the Poll is simple for a Candidate for President- an interest of exactly where you stand as a Candidate in any particular State at any given time under prescribed conditions. The phrasing of the questions is probably the single best indicator of reliability of the information, so that is very important.

For instance:
[If the election were held today] gives us a ‘Time’ and ‘Condition’. Today is the “Time” and the ‘Election’ is the condition. [Would you vote for Cody, Donald, or Jeb] gives us the specific targets by multiple choice as subjects of the time and condition.

There is methodology even in placement of the subjects. For instance a Poll-Taker who doesn’t recognize any of the names might be inclined to either vote for the first name he/she hears, or the last name he/she hears spoken. This is where the guessing game starts. Does the Poll-Taker know and understand who exactly they are being questioned about, under the correct time, and conditions, or is he/she just trying to get through the test so he/she can get back to mowing the lawn? For more information on Polls, who takes them, polling methodology, what the margin of error means exactly we recommend this link.

Of course we have stressed the all-important meeting between the Pollster and the Client where the questions are agreed to and phrased exactly the way the Client wants them to be phrased. The reason we have stressed this is because if anything is wrong and an unknown factor comes into play or comes into the arena, the information of the Poll can be completely wrong. It is this factor that makes Polling about as good as throwing your money in the air if the conditions, time, or subjects are wrong.

For instance, every Poll conducted that has Hillary Clinton in it basically assumes she is going to be a Candidate in the race at a particular time either for the Primary or the General Election. But what happens if she is indicted criminally on charges of mishandling national security secrets and has to drop out of the race? One has to wonder why Mrs. Clinton didn’t turn over the server voluntarily if the server was blank as is being reported by FOX; and how important where the ‘Top Secret’, Special Intelligence, and NoForn emails that she did turn over that were stored on a server that easily is said to be the victim to the Russians and Chinese Governments?

Pollsters work very hard not to bring into the Polling Question the conditions that might set off a red light to Poll-Takers unless that is exactly the intent. For instance a simply question posed desiring to know the Trust Issue of Mrs. Clinton might be simply – [Do you trust Mrs. Clinton with the Office of the President? ]

Now we compare that question with the question feeding more information to the Poll-Taker:
[Given the recent ‘Top Secret’ national security emails found on Mrs. Clinton private email server while she was Secretary of State, and her choice not to use a Government protected server based on convenience, do you trust her with the Office of the President? ]

The first question might take advantage of what the Poll-Taker doesn’t even know yet, because he is not on the Drudge Report 24/7. You can certainly understand both questions are now very legitimate and relevant questions with the reality of the conditions. Its very interesting how a Candidate begins to Poll well when their name is actually used in the Polling Question as apposed to leaving it up to the Poll Taker and the Main Stream Media’s coverage of any and all of the Candidates or lack thereof.

For instance, with no coverage by the National Media, what a shocking realization it is for Democrats to all of a sudden start hearing Democrats when asked, “Who are you voting for if the election were held today?” with no Candidates mentioned say-Cody Robert Judy. That’s huge!

This factor has led us to take our own Secret Poll including a more realistic approach for Time, Conditions, and Subjects and we feel it is even more accurate than what the other Candidates, News Organizations, and Super PACS are getting from their Polling Numbers with more relevant conditions being asked representing reality.