(Aug. 11, 2015) — On August 3, The Post & Email published portions of a letter written by Tennessee Department of Correction (TDOC) inmate Timothy Aaron Baxter to his father describing his severe illness from a staph infection in his jaw which reportedly has gone untreated for at least several months.

Baxter was scheduled for surgery on July 13 but was unable to undergo the procedure because of a very low red blood count. In his letter, Baxter related that from researching his condition, he learned that he is subject to septic shock at any time.

Early in May, Baxter told The Post & Email in a telephone interview that he suffers from migraine headaches, pain in his left shoulder, elbow and both wrists, and ringing in his ears after having been hit on the back of the head with a radio by two former corrections officers, Robert Moffatt and John Moffatt.  TDOC spokeswoman Neysa Taylor told The Post & Email in response to a Public Records request about the incident that no responsive record existed.

According to Jeremy Finley of WSMV in a report released last year, staff-on-inmate and inmate-on-staff assaults are grossly under-reported by the TDOC.

The Post & Email is uncertain as to exactly when Baxter’s staph infection was identified, but letters and phone calls from him, which had been fairly regular, ceased at the end of May.

Baxter is housed at the Northwest Correctional Complex (NWCX), which on July 24 was the scene of a violent uprising fueled by gang rivalry described to The Post & Email in letters from several inmates.

In response to mainstream media coverage of the July 24 incident and other recent stabbings in prisons, TDOC Commissioner Derrick Schofield told a legislative committee on Monday that “I know what I’m doing.”

In a letter to his father written at the end of July, Baxter wrote, “I am really considering just giving up Dad…I’m tired of hurting.”

Timothy Baxter has been imprisoned twice by the TDOC but protests his innocence in both cases. Neither audio nor typed transcripts of the trials have been made available to family members who specifically requested them of Madison County court clerk Kathy Blount and transcriptionist Amy Mays.  In both cases, Baxter’s relatives offered to pay reproduction fees, and in one instance, traveled two hours to the courthouse to obtain them, only to be sent home empty-handed.

As in other places in the South as reported by residents, Tennessee’s “law enforcement” system uses county grand juries and the courts to retaliate against individuals they dislike, including government whistleblowers and those attempting to defend their right to due process under the U.S. Constitution and Bill of Rights.  As The Post & Email has demonstrated over the last six years, Tennessee grand juries contain a judicially-selected foreman who serves at the pleasure of the judge and at times combines his vote, which represents the state’s interest, with the votes of the 12 empaneled grand jurors.

Tennessee law requires that there be 13 voting members on a grand jury.  A 2013 brief written by then-Deputy Attorney General for the Criminal Division Kyle Hixson stated that the foreman’s role is administrative and ministerial rather than to vote.

According to the Fifth Amendment, a grand jury’s purpose is to evaluate evidence uncovered either by its own investigation or from information presented to it by the government to determine whether or not probable cause exists to charge an individual with a crime.  However, in Tennessee, as in many other states, the grand jury has become a tool of the government to facilitate prosecution, even in the absence of hard evidence.

Three years ago, Walter Francis Fitzpatrick, III, also currently a TDOC inmate, discovered that the Tennessee legislature passed a series of statutes in 1984 ordering the county criminal courts to combine into districts.  As a result, judicial districts (TCA 16-2-506) were established encompassing from 1 to 5 counties each, depending on the population; however, the county criminal courts continued to function independently as before.

In 2008, the legislature passed a law (TCA 22-2-314) stating that no juror could serve a second term within a 24-month time frame, but that law is flouted as well, as The Post & Email has demonstrated from eyewitness accounts and documentation showing that the same jurors have served consecutive terms.

Regarding Baxter’s second case which arose from an alleged road rage incident in December 2010, Baxter’s father reported that the accuser, Richard Upright, did not appear in court as scheduled for the trial. Rather than dismiss the case, Judge Roy B. Morgan dispatched sheriff’s deputies to search for Upright for “over an hour” in order to compel his appearance. A transcript later obtained by Timothy Baxter and sent to The Post & Email indicates that Upright was not able to positively identify Baxter in the courtroom as the alleged attacker.

The transcript also reflects that Upright, who was in his early 70s at the time, testified that he drove a truck for a living, but his medical records reveal that the day after the incident when he sought medical care, he told medical staff that he was “retired.”

The Post & Email has also learned that a key witness to the incident was prohibited by the district attorney general from testifying.

“There is no justice in a dictatorship,” Fitzpatrick had said at approximately the same time.

At the end of June, Timothy Baxter defended himself in a federal case he filed against three corrections officers alleging a brutal assault by two of them on September 11, 2009 in an okra patch where Baxter was working. At the time, Baxter was just days away from his release date.

The corrections officers, two of whom are brothers by the name of “Moffatt” and have since been terminated for alleged inmate assaults, claimed that they struck Baxter with a “tomato stick” in “self-defense.”

Baxter’s father reported that during the trial, his son’s voice was so weak as a result of his illness that it could barely be heard, and that portions of the hearing were so upsetting to him personally that he was forced to leave the courtroom.

Lee Baxter is in receipt of a second letter his son recently wrote from prison, portions of which appear below. 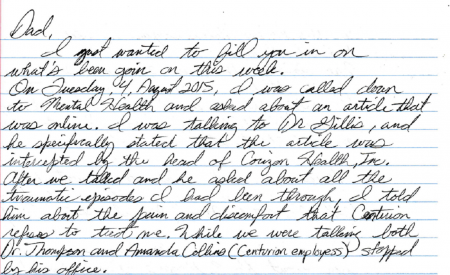 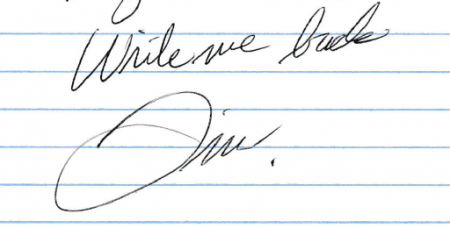