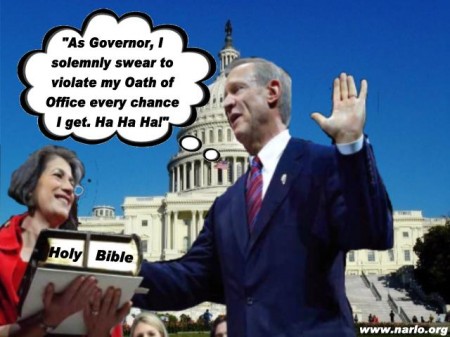 (Aug. 9, 2015) — The Framers of the American Republic and the U.S. Constitution knew how governments, left unattended by the people, would eventually morph into kingdoms, dictatorships, or a pseudo- Democracy run by the mob, in what Alexis de Tocqueville, 210 years ago, predicted would be the “Tyranny of the Majority.”  The Framers set up two (2) major impediments to this evolution through 1) the Separation of Powers Doctrine in the executive, legislative and judicial branches of government, but 2) also granted to the states in the 9th and 10th Amendments to the U.S. Constitution the following extraordinary rights:

9th Amendment: “The enumeration in the Constitution of certain rights, shall not be construed to deny or disparage others retained by the people.”

10th Amendment: “The powers not delegated to the United States by this Constitution nor prohibited by it to the States, are reserved to the States respectively, or to the people.”

The basic idea of all these protections was to inhibit the federal government from becoming so powerful that it would overwhelm the rights of the states and the people.  Welcome to today’s America.

Since we have been essentially unsuccessful in getting others to join us in this fight against an ever-more-powerful central government, and since it is the responsibility of the governors of the individual states to stop the federal government from exerting more power, we, unilaterally, are proceeding with charging the governors of several states with violation of their oath of office and criminal negligence in discharging their duties as governor, for failure to enforce the provisions of the 9th and 10th Amendments, along with other serious charges.

The President of the National Association of Rural Landowners (NARLO), being a staunch advocate for the American rural landowner, is making these charges against the governors for and on behalf of all rural landowners who find themselves virtually disenfranchised and unrepresented in the legislative and administrative lawmaking process.  In fact, rural landowners find themselves having to bear almost the entire burden of environmental protection while their urban brothers and sisters remain unaffected.

The governor has a duty to serve all the citizens of his or her state, not just urban dwellers who have become the “Tyranny of the Majority” supporting sanctuary cities, social justice, radical environmentalism, multi-culturalism, collectivism, political correctness, Progressivism and the one-world-order.  What do city folks care about the rural landowner being savaged by radical international environmental law that deprives them of their fundamental right of use, due process and 5th Amendment protections and reduces their property values?

So, on behalf of the American rural landowner who produces our food, our wood products and our oil and minerals, we are making the following charges against the governors of certain states, starting with Jay Inslee, the Democrat Governor of Washington State, with a Certified – Return Receipt Requested letter and an accompanying Affidavit of Truth.  In that letter and Affidavit we charge the governor with, TO-WIT:

1.         The governor of said state, as its chief executive, has allowed the federal government to tax the citizens of his state and then allowed the federal government to blackmail those very same citizens by forcing those state citizens to accept federal law or policy, on the threat of withholding federal funds to that state if the state doesn’t comply, funds that belonged to the state citizens in the first place.  By so doing the governor has failed to uphold the provisions of the 9th and 10th Amendments of the U. S. Constitution and has by his or her actions given greater power to the federal government, thereby reducing the constitutional power of said state.

2.         The governor of said state has allowed the invasion of international law to supersede and override federal and state constitutional law by not stopping the implementation of the International Maintenance Code, or other international codes or policies, in state, county and city regulations.  In addition, the governor has allowed the United Nations affiliate agency called, the International Council on Local Environmental Initiatives (ICLEI), to invade said state and contract with county and cities to further the implementation of international environmental policies that are in direct conflict with constitutional law, state and federal.

3.         The governor of said state has instituted law to limit carbon dioxide (CO2) emissions across the board for the international con game of man-caused global warming, when the science of man-caused global warming is a theory at best and anything but settled science.  By instituting those laws the governor has burdened the citizens of said state with millions of dollars in taxes and fees for an alleged future danger that in all probability is nothing more than the natural cooling and heating cycles of the earth over time.  In fact, there is equal science supporting such a claim that directly contradicts the man-caused global warming theory, but it is ignored for political reasons.  By purposely rejecting one of two scientific theories on alleged global warming in the governor’s decisions, the governor has either knowingly, or unwittingly, become an unregistered international foreign agent, acting for and on behalf of foreign interests.

4.         The governor of said state has allowed state agencies to violate the constitutional property rights of rural landowners by not prohibiting those agencies from promulgating draconian environmental regulations, driven largely by international radical environmental policies, such as UN’s Agenda 21.  These regulations fall disproportionately on rural landowners, in violation of their 5th Amendment and due process protections, as well as violating their equal protection rights under the U. S. Constitution.  Rural landowners own most of the private land in said state, but find themselves totally disenfranchised from and virtually unrepresented in the legislative and administrative law-making process.

5.         The governor of said state has allowed federal agencies, like the EPA, the DOE and the DoED, and others, to run amok in said state without invoking states’ rights under the 9th and 10th Amendments.  The federal government owns said state and the governor let it happen.

6.         The governor of said state has allowed past and current run-away legislatures to buy votes with public monies to fund welfare and public assistance to able-bodied citizens and illegal aliens and has done nothing to stop it.  The governor has made promises to state employees for pension plans that are criminally under funded.  By such actions the governor has violated his or her fiduciary and financial responsibility to state citizens, thereby sending state finances towards insolvency and further burdening state citizens with exploding taxes to pay for government’s gross negligence.

Our first governor letter and Affidavit of Truth was sent to Governor Inslee of Washington State on August 3, 2015.  We have given the Governor 30 calendar days to respond to these allegations.  Copies of the letter and the Affidavit were also sent to the leaders of the State’s House and Senate.

Because the issues we raise are so serious and systemic in all state governments and are the reasons why the federal government has become so powerful, thereby superseding states’ rights in violation of the 9th and 10th Amendments, we will be contacting other state governors over the next few months and charging them equally, as we have done here, on behalf of the rural landowner who has been disenfranchised from the political process.

States have become complicit and co-conspirators in these power usurpations by the federal government.  It would seem very few Americans understand how vital is the relationship between the states and the federal government, to the separation of powers and to the success and survival of our allegedly “free” Republic.

Our first letter to Governor Inslee of Washington State and Affidavit of Truth are posted on the NARLO website HERE.  All future letters to the governors of other states will be in the same format.

This effort will take a considerable amount of time and expense on our part.  If you wish to donate to this effort or become a member of NARLO, you can do so HERE.

We’re Charging Governors With Violation of Oath of Office! added on Sunday, August 9, 2015

3 Responses to "We’re Charging Governors With Violation of Oath of Office!"