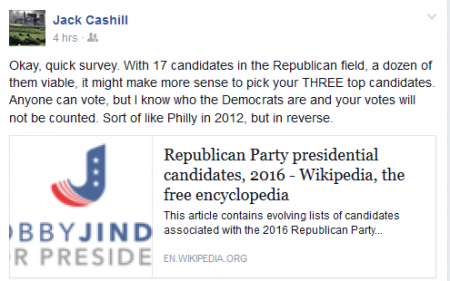 (Aug. 8, 2015) — On Saturday afternoon, author Jack Cashill posted a Republican presidential poll asking readers to name their top three candidates among a field of 17 who have declared they are seeking the office for 2016.

The survey can be found here.

When The Post & Email logged in, a number of respondents had indicated their choices, sometimes with specific positions outside of the presidency identified.

Many named Sen. Ted Cruz, Gov. Bobby Jindal, or Sen. Marco Rubio as one of their three choices.  No one appeared to question the constitutional eligibility of any candidate.

Article II, Section 1, clause 5 of the U.S. Constitution states that the President and commander-in-chief must be a “natural born Citizen.”  While not specifically defined by the Founding Fathers, most Americans presume it to mean that the person must have been born in the United States.

However, historical texts, essays, at least four U.S. Supreme Court cases, and excerpts from the Congressional record indicate that the citizenship of the person’s parents was also a consideration equal to, or perhaps even more important, than the person’s birthplace. While Barack Hussein Obama claimed he was eligible for the presidency in 2008 based upon his alleged birth in Hawaii to a U.S.-citizen mother, his father was a citizen of Great Britain, and later, Kenya, when that nation achieved its independence in December 1963.

Swiss philosopher Emmerich de Vattel had written in “The Law of Nations,” believed to have been heavily referenced by the Framers, that the father’s citizenship determines that of the child.

Mainstream media have avoided the subject of Article II eligibility, particularly in regard to Obama.  In December 2007, commentator Chris Matthews stated factually that Obama was “born in Indonesia” and had “an Islamic background,” although he did not cite his source.

Declared candidate Donald Trump questioned Obama’s eligibility early in 2011 while considering a bid for the presidency for 2012.  He has also expressed doubt about the validity of Obama’s purported long-form birth certificate and college applications, the latter of which have never been released.

Whether or not Obama’s allegiance to the United States is undivided has been intensely questioned, particularly in light of the nuclear agreement his regime has struck with Iran.

A week before Cruz announced his presidential candidacy last March, two former solicitors general published an essay in the Harvard Law Review asserting that although Cruz was born in Canada to a Cuban-citizen father, his American-citizen mother qualified him as a “natural born Citizen.”  Other constitutional scholars disagree, including Atty. Mario Apuzzo, Atty. Herb Titus, and The Post & Email’s own Joseph DeMaio.

At one point, Fox News reporter Carl Cameron stated on air that because of his birth in a foreign country, Cruz was not eligible to be president.

Jindal was born in the U.S. to two legal resident students who were citizens of India.  Rubio was born in Florida to two Cuban-citizen parents and escapees from Castro’s Cuba.

In response to the poll, The Post & Email left the following comment at approximately 3:45 PM EDT, referencing a recent article written by DeMaio:

Following our comment, two more comments appeared, but not in response to The Post & Email’s question on presidential eligibility. 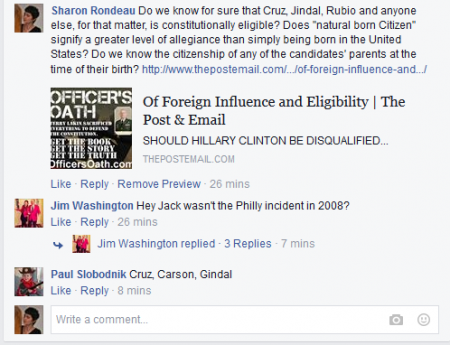 As of press time at 4:10 p.m. EDT, no other comments have been submitted.

Is No One Questioning Constitutional Eligibility? added on Saturday, August 8, 2015

9 Responses to "Is No One Questioning Constitutional Eligibility?"