(Aug. 3, 2015) — On Monday morning, The Post & Email received a copy of a letter written by Tennessee Department of Correction (TDOC) inmate Timothy Aaron Baxter to his father, Lee, from the Northwest Correctional Complex (NWCX) in Tiptonville.

On July 24, NWCX was the scene of a violent outbreak among approximately eight gang members, all of whom were reportedly taken to area hospitals with stab wounds.

Baxter was scheduled to have surgery for a deep-seated staph infection several weeks ago but never underwent the procedure because his red blood count was found to be too low.  In an undated letter received by his father on Friday, Baxter indicated that from injuries he sustained in 2009 while in prison and his current illness from the pervasive infection and its side effects, he is “really considering giving up.” 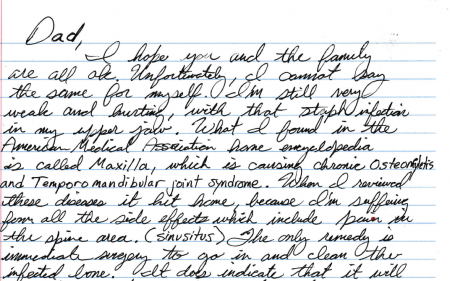 Baxter then related of his medical condition:

Regarding the federal lawsuit for permanent physical injuries from the attack he suffered on September 11, 2009 while at the West Tennessee State Penitentiary (WTSP) in Henning, he wrote:

At a hearing held on June 24, 25 and 26 at the federal court in Jackson, Baxter acted as his own attorney in seeking redress for the injuries to his left arm, shoulder and head from the 2009 attack he alleged was carried out by two former corrections officers, Robert and John Moffatt.  The Tennessee attorney general’s office defended the Moffatts and a third officer named as a defendant, Arthur Mallory.

Baxter was awarded nothing by the jury, which Lee Baxter suggested was compromised.  Over the last six years, The Post & Email has published hundreds of reports detailing Tennessee’s corrupt court system which uses hand-picked grand jury foremen and, in some cases, hand-picked jurors, in violation of Tennessee law.

The TDOC reports that its prisons are consistently more than 90% full.  Recent reports in The Tennessean and other mainstream media delineate a crisis within the state’s prisons caused by a mass exodus of corrections officers working under extremely strained and dangerous conditions.

Baxter has been imprisoned twice by the Madison County Sheriff’s Department on what Baxter claimed were false premises.  The first incarceration arose in 2001 after he was accused of operating a methamphetamine laboratory at a private home where he kept his drum set to rehearse with fellow band members.  According to his father, Baxter was a talented drummer with a bright future prior to his arrests and injuries sustained both in the Madison County jail and at Henning.

Baxter’s parents have been stonewalled by the Madison County court clerk’s office after they requested audio and/or typewritten transcripts from Baxter’s cases.  When The Post & Email placed a call to the transcriptionist to ask as to the proper procedure to obtain a transcript, she allowed us to record the call but after several minutes, abruptly decided to end it.

Tennessee Administrative Office of the Courts (TAOC) spokeswoman Michele Wojchiechowski did not respond to The Post & Email’s questions posed on June 11, 2015 as to why no one within the Madison County court system would procure any requested records, even if not to us.

Court clerks in Monroe and McMinn Counties have also failed to provide documentation on active cases to The Post & Email, citing Tennessee’s Public Records Act, which states that “any citizen of this state” can obtain public records.  Last week, Lt. Bill Miller of the Tennessee Highway Patrol did the same.

Baxter’s parents are both “citizens of this state,” meaning Tennessee, and by law should not have been refused the documentation.

Report: Seriously-Ill TDOC Inmate “About to Give Up” added on Monday, August 3, 2015