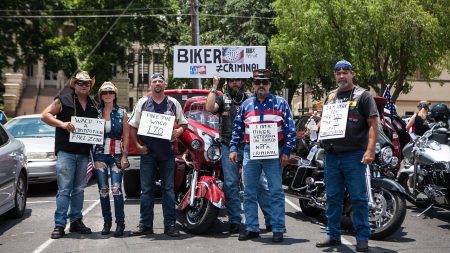 First they came for the Socialists, and I did not speak out—
Because I was not a Socialist.

Then they came for the Jews, and I did not speak out—
Because I was not a Jew.

Then they came for me—and there was no one left to speak for me.

The concept in the above quote credited to Martin Niemoller is certainly relevant to current events in this country. On the 17th of May in Waco Texas, what could best be described as a mass assassination occurred in the parking lot of a restaurant known as Twin Peaks. Of course, if your mind and reasoning process has been invaded and is now a prisoner of the mass media culture operating under the aegis of Operation Mockingbird, you of course believe a group of dastardly criminals riding motorcycles took time off from selling illegal drugs, raping young girls and terrorizing neighborhoods to shoot each other at a community meeting. Of course, thanks to the alleged alert government authorities, some from the same alphabet agencies that killed 80 men, women and children in their church in the same town back in 1993, not quite as many folks met their death.

What really happened in that parking lot on that day will probably not come out for some time. The absolute perversion of “due process” and the suppression of so-called evidence by the prosecution constitute a crime of gigantic proportions—but where is the outrage?

After the shooting took place in the parking lot, over 175 witnesses were arrested, charged with organized crime activities and placed under a one million dollar bond. Then, of course, most of their bikes were seized and impounded. (Just another source of revenue collection for the city of Waco, I’m sure) Of course the “Judge,” a former Texas Department of Public Safety Trooper who was apparently at the scene at the time of the shooting (who tipped him off) and has assisted the police and prosecution by interjecting himself into the investigation, stated he set the bonds of all those arrested at one million dollars “to send a message.” Apparently the message the good judge wished to send was that he has never heard of the Bill of Rights, especially the 4th and 8th Amendments and the Code of Judicial Ethics. (Speaking of Judicial ethics: there is an oxymoron that exceeds military intelligence if I have ever heard one.) Don’t worry, it gets better.

A Dallas attorney by the name of Clint Broden filed a motion to remove this judge from his client’s case for obvious misconduct. 47 short days later, a retired judge granted the motion. The questionable judge, not the retired one, a fellow named Walter H. “Pete” Peterson seems to have only been removed from his official capacity in the case involving attorney Broden’s client, the other 176 people arrested apparently still reside in judicial misconduct hell.

Judge Peterson has done everything within his power to destroy any semblance of constitutional government in his area of operations. It appears “Pete” rubber-stamped 177 identical warrants which differed only in the space where a name of the person arrested appeared. He also allowed one police officer to sign each and every one of the warrants as if that one officer could have been observing the actions of 177 different people during the hail of gunfire. The logical question would be: could this officer pick any of the men he swore an oath (obligatory on signing a warrant) were involved in “organized crime activities” out of a line-up without help from ole’ Pete? Obviously not; this bastion of police integrity, one Manuel Chavez, has since stated he didn’t know any of the people listed on the warrants or what they had done. The good DA just typed ‘em up and he signed ‘em.

We should all know what a “probable cause” hearing is but in Texas it is called an “examining trial.” This is where the prosecution presents their “probable cause” necessary to charge and arrest the accused. Don’t forget now that this shooting occurred on May, 17th. Well, judge “Pete” set the “examining trial” for attorney Broden’s client on the 10th of August and has refused, without explanation, to expedite the hearing when a motion was filed to do so.

Judge “Pete” has also been accused in official court proceedings of “colluding with the local DA to set the examining trials so far from the arrest date.” Here is another relevant question: If probable cause existed to sign a warrant, seize a person’s private property and place them under a one million dollar bond, why would the DA need over 6 weeks to produce that probable cause? I know—it’s just my tin-foil hat mentality! It has nothing to do with the fact the police mysteriously “unarrested” five of those arrested the night of the shooting. Hmm, could these have been paid agent provocateurs who initiated the dust-up or gunfire so the cop snipers (BATF, FBI, TDPS) deployed hours before the meeting could open fire? I know—it is unfair to accuse federal agents who facilitated the acquisition of firearms by known gang members in “Operation Fast and Furious” of such nefarious acts. Shame on me! It is also of interest it has been reported that two members of the Cossacks Motorcycle Club took off their club “colors” and donned police apparel shortly after the shooting stopped. This has not been confirmed since the police seized all cell phones and video equipment in the immediate area after the shooting and has refused to release any of it. To protect those who were charged of course!

Now, the question is: where is the outrage among the Freedom and Liberty groups? Where is the outrage in the Tea Party entourage? It is a known fact that a large percentage of members in these Biker clubs are veterans with some of the clubs being made up entirely of veterans; so where is the outrage in the Veteran community? Does “innocent until proven guilty” not count if you are a member of a group that has been demonized by the government? Newsflash: the government has named anyone who doesn’t agree with their acts of tyranny as “potential domestic terrorists.”

What happened in Waco, Texas in that parking lot on May 17th may have been the opening salvo in what has been called Jade Helm—if such a thing actually exists. But, more importantly, what has the government learned from this little adventure of theirs which left nine people dead and several wounded with over an additional 180 people arrested and held under very suspicious circumstances, their private property seized and due process shot to hell?

The lesson learned so far is: the so-called freedom movement is dead on arrival when it comes to defending the rights of people that have been previously classified as criminal gangs by the powers of tyranny. They have learned that all that is necessary to neuter any movement towards liberty and constitutional government is to have their willing dupes in the media—this includes FAUX News—Hollywood and prime-time television, demonize and accuse of outlandish actions those who oppose them and their criminal cabal. If this WAS the first operation in Jade Helm, it has been so far a resounding victory for the government. If it wasn’t, freedom and liberty have still been delivered a serious set-back.

If I were directing the operations designed to eliminate freedom and liberty in this country, my first target would be groups that maintain a driving force to be free of government control, are made up of a majority of veterans who have the skills and the mind-set to kick ass and take names and who are always armed. Was this strategy employed in Waco on the 17th of May? Time will tell.