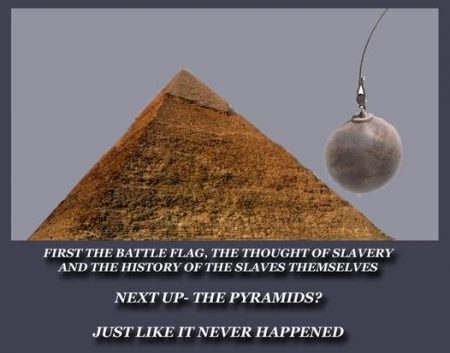 (Jul. 19, 2015) — The recent angst over the Confederate Battle Flag and its supposed symbolism should anger every black man and woman in the country who claim ancestry from slavery.  While it is possible to trace lineage to a particular slave or plantation, it is unlikely that every black man or woman will ever be able to make the claim with certitude beyond the obvious, ‘I am black and am a descendant of a black.’

However, there is a much larger question here than is being considered.  The winds of discrimination are being fanned by those who stand to profit from the ‘keep it up or take it down’ argument.  The knee jerks have already been exploited and there is little about the Battle Flag in the news today.

There are questions that remain unasked and unanswered.  If I say that something does not exist, does that make it true?  If, for example, I say that there is no God, does that mean that God does not exist?  Or am I just choosing to ignore history?  Christian history being the predominant history of choice to ignore in this culture at this time.  Or do I offer a salient argument that disproves the existence of God?  Since there is no empirical proof that God does exist begs the question.  Is lack of proof, proof?  Or, is the absence of evidence the evidence of absence as posed by William Lane Craig?  If I were to say that Martin Luther King was a figment of the collective imagination of the press, would that make it so?

Over the intervening centuries, buildings of great beauty and architectural significance have been erected as the evidence of belief in God.  Too, there have been many buildings of beauty and historical and cultural significance that have been erected that once were the sites of persecution of Christians.  Colosseums erected during the Roman Empire served the blood lust of the “enlightened” members of society and those of the baser tiers of society.

Would the destruction of these buildings eradicate the history that was made in them?  If you said yes, then would you not, by extension, have to destroy the entire book of Western history to achieve the absence of evidence?  The fact that all evidence is removed does not change, alter or vacate history.  Rather, the absence of evidence incites the archaeological nature of the inquisitive mind.  To make a thing disappear entirely one needs to engage in a massive effort to scrub the history of a people or a nation clean of any reference to the past.  To make that happen you would have to erase the collective memory of all.

Does removing the Confederate Battle Flag change history? In particular, the meaning of the South?  If all references to the USSR were removed from every history textbook in every country, would the idea of communist socialism be washed away? The idea of slavery was not new in the 17th Century.  Slavery had been practiced for thousands of years on the African Continent, by cultures as diverse as the Muslims or the Egyptian.  To say that the Egyptian government is going to destroy the pyramids to rid the county of the symbols of slavery is foolhardy.  That action would deny the achievement of the greater parts of the society.

One Response to "Battle Flag"