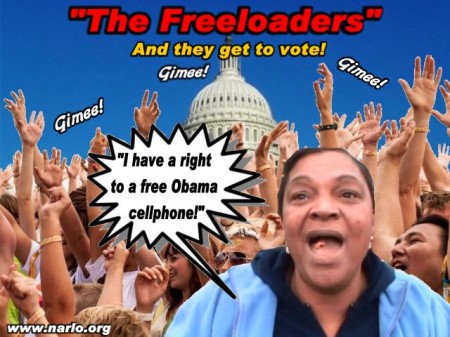 (Jun. 28, 2015) — In a recent article we wrote this:  “The power of the Progressives has grown to the point that more Americans find a sleazy, hopelessly corrupt, power hungry, insanely ambitious, half man, ‘What-Difference-Does-It-Make’ Hillary Clinton, a better candidate for president than any one of the 20 or so declared or undeclared Republican candidates.  That’s not Hillary’s fault!  It is a testament to how successful the Progressives have been over the last 100 years in buying off the public for votes …. with your money.”

Since President Johnson’s Great Society (a Liberal Progressive Democrat) in the mid-1960’s, the American government has extracted from the economy and the taxpayer by force, an estimated $22,000,000,000,000 (that’s trillion) to allegedly lift millions of Americans out of poverty.  To put $22,000,000,000,000 into perspective, that many one-dollar bills, laid end to end, would reach a point from Earth, to about half way between the planets of Uranus and Neptune, or 2,118,055,555 miles, three -quarters of the way across the solar system.

This extraction out of the economy of such a massive amount of money has had two negative impacts on America and Americans but has done little to stem the tide of the poor and weak among us.  In fact, it has only aggravated and perpetuated the life of the poor and weak.

1.         The severe loss of liquidity to the economy, whose lifeblood is after all money, has inhibited job growth, entrepreneurs, new products and world trade of goods and services.  The loss of this revenue has also put crimps in the services government is supposed to provide, such as roads, bridges, infrastructure and our military readiness.  Added to this loss of liquidity is the massive increase in regulations passed by politicians who never read the laws they passed.

2.         But even worse than that, it has robbed over two generations of Americans of their personal pride, their self-reliance, their independence, their potential accomplishments and their self-worth and has relegated millions of American families to generational poverty.  Nevertheless, we acknowledge that some in our society are in need of society’s help.  However, when there are more people “needing” help than those who are funding that help, it is unsustainable.

Instead, what has been created is a huge mass (tens of millions) of bought-off American freeloaders, miscreants, ne’er-do-wells and criminals, literally sucking the economic life out of productive Americans, aided and abetted by the federal government, riding a white horse called Robin Hood, with a saddle named Progressive and reins and bridle called Liberal.  Robin Hood rides around in circles, always being pulled to the “left” by reins that only go one way, the Progressive way.

All these bought-off voters have their teeth firmly embedded in your hide and their hands deep in your wallets.  They have a government-mandated contract on your earnings, enforced at the point of a gun pointed at your head.  You are their slave by the simple operation of a plurality of votes.

We guarantee you that this was not an accident, nor was the Federal Reserve, the IRS, Social Security, the New Deal, the Great Society, Medicare, Medicaid, 80 welfare programs….. and now ObamaCare.  This was and is all part of a long-hatched plan by the Progressives over a span of 100 plus years to be the only viable political party in America.  The conservative party, in reality, has no chance to overcome the power of the majority of bought off voters if they insist on sticking to conservative principles.  Therein lies the rub.  The conservative party, just as anxious to grab the reins of power, dumps its principles of liberty to pander to the bought-off voters in order to remain even remotely viable.  By their actions they just become another chapter of the Democrat Party.  The current cadre of Republican candidates is falling all over themselves to do just that, except maybe the “Donald.”  Has anyone paid close attention to the Speaker of the House or the Senate Majority Leader lately, both Republicans in name only?  They have been supporting Obama since the Republicans took control of Congress in 2014.  As a result, each year, the number of bought-off voters rises as they jump on the government-enforced, Robin Hood gravy train, aided and abetted by both political parties.

A country that rose to such riches and power on the foundation of freedom and capitalism has now become weak, less powerful, rudderless and essentially impotent, especially under such a feckless, incompetent leader with a name right out of the tribes of Bedouins riding around the Arabian desert on spitting camels.

The country is broke and the states are broke!  Ex-Federal Reserve Chairman Paul Volcker just warned in the last two days that the states have built up unsustainable long-term pension liabilities that the states aren’t adequately funding.  He suggested that a bunch of governors should be fired.  This is just another government-created bubble, at the state level, that will burst in time.

Our economic, domestic, financial and foreign policies have become a joke.  Education has become indoctrination.  We are a laughingstock around the world as we sink ever lower into hegemony, debauchery and decadence.  America is a shadow of its former, formidable self.  Why?  Because the Progressives, using the power of government and the majority votes that keep them in power, has been and still is successful in exploiting man’s weakness for getting something for free in exchange for their vote.  What continues to remain a great mystery to this author is why the hell those providing “the something for free” haven’t risen up in revolution and arrested this long march into national oblivion.

Greece is broke because of Progressive (socialist) policies.  Most of the Western countries including America, Canada, Europe, Japan and Australia are deep in debt, to the tune of multiples of their Gross National Product.  Australia is now toying with “taxing” (yes, we said “taxing”) savings accounts deposited in banks.  Watch for the run on banks if that happens.  There has even been “quiet” talk of the U. S. Government confiscating America’s private pension funds to pay down the debt and make the Federal Reserve whole.

The hidden debt bubble created by those policies and the runaway printing of currency by the central banks to fund those policies have put every citizen in every developed country on an accelerating death train headed for a sharp curve where derailment is a certainty.  If you think John Galt (Atlas Shrugged), or some American freedom or militia group is going to suddenly appear on the scene and save this death train from derailment, you are delusional.  Derailment has already been decided for you, and you had no vote in the matter.  All you did was look the other way while it was happening.

But the central bankers and the governments have a plan to avoid derailment, developed at top-secret meetings of the G7, the G20, the Trilaterals and the Bilderbergs.  In order to save the central banks, government and big business from a worldwide meltdown resulting from insane socialist policies and the folly of Keynesian economics, drastic measures will have to be instituted among men of planet Earth ….. for their salvation, of course.  Here are a few of those measures.

1.         The merging of all nations into world government and the dissolution of national sovereignty.

2.         The repealing of all national constitutions, to be replaced by world mandates.

6.         Elimination of all fossil fuels to be replaced by alternative energy sources.

8.         Individual rights subjugated to the collective, as dictated by the world elite.

9.         Elimination of property rights and the institution of absolute environmental rights.

10.       The destruction of capitalism as we know it, to be replaced by some form of communism.

If you don’t think so, then you haven’t been following the debates in Congress and the Administration over trade agreements.  It is all about merging America into the one-world-order, and it is being driven by world special interests and giant corporations as well as the central banks.  It is not about what is in the best interests of America, Americans, American sovereignty, or unalienable, individual rights.  It is about the best interests of the central banks, the continued survival of giant corporations and the elite who wield political power.  If the Founding Fathers were here in the flesh, there would be a wave of revolution talk (rebellion) moving across America like a wind-driven grass fire.  Well-armed militias would be popping up everywhere.  Insurrection would become the rallying cry for freedom, and Americans, by the millions, would be clamoring to sign our “Declaration of Open Resistance.”

Yes, there are peaceful solutions to America’s great problems but only if the voices of reason and freedom are louder and stronger than the freeloader’s vote and only if those voices are willing to take the “hits” that will surely come their way from those who wish to maintain the status quo.  We aren’t holding our breath in anticipation of that happening.

For those who still have fight left within them, urban or rural alike, our NARLO website provides volumes of information, descriptions of the problems and the details of many solutions to those problems, including IRS issues.  It could take weeks to digest all of the valuable information residing on this powerful 10-year- old website, but at least it would for those who have a deep desire to see that the freeloaders don’t win by a plurality of their votes.

“Just How Are You Going To Reverse Engineer History”

“Just How Are You Going to Unravel This Banana Republic”

Just How Are You Going To Overcome The Freeloader’s Vote? added on Sunday, June 28, 2015

2 Responses to "Just How Are You Going To Overcome The Freeloader’s Vote?"