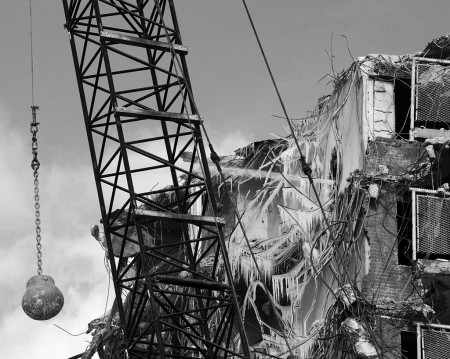 (Jun. 27, 2015) — We’ve all seen these shows where the building is demolished. A final check for squatters who may have sneaked in during the night and for any wires that the rats may have dislodged; then the siren sounds; the countdown and then . . . POOF! There she goes! And if television ever taught anybody anything, it’s to be upwind of a crumbling structure, such as what we saw as the Twin Towers fell.

There comes a point in time when the amount of water bailed is less than the water coming in. It’s called the “saturation point”: the point of no return. In the movie “The High and the Mighty,” the plane, on its flight from Hawaii to San Francisco, just past the distance of going back equaled the distance to finish the flight. What ensued was the choices we have to make when the situation is desperate, when the only thing “on the line” is life itself, when one’s most prized and cherished possessions become just excess baggage in the fight for survival.

Those passengers on that ill-fated flight threw everything they could out the door to lighten the load, and whatever was bolted down was unbolted. It even came down to the collective weight of tossing jewelry into the drink: earrings, necklaces and, yes, even wedding rings had to be sacrificed to insure the plane’s one chance of making it over the hill to a safe landing. Everyone on that plane had to work together to achieve the goal: everyone, and if they didn’t go along they were made to see the error of their ways. “Her ring but not mine” suddenly had no valid reference in reality, for what good is a wedding ring to a corpse 50 fathoms deep?

What just happened to America these past two days wasn’t about “healthcare” and “marriage;” no, what happened was the formal demolition of the Constitution’s system of checks and balances among the three branches of government. What we witnessed was the abrogating of the Judicial to the Executive from a shared responsibility to uphold the Constitution to no responsibility whatsoever.

Since Congress has not seen fit to address Obama’s eligibility issue, they have taken themselves out of the equation (Executive = Legislative = Judicial) and, therefore, out of the fight to preserve and protect the Constitution. Not even individual members of Congress have expressed any desire to expose Obama’s “DE FACTO” status, including those who opposed him during the presidential campaigns 0f 2008 and 2012, except for a few voices in the wind, mine included.

Yes, the Ship-of-State has sunk and we now find ourselves in lifeboats scattered here and there. The reason why the Tea Party was targeted by the White House via Lois Lerner of the IRS was that the Tea Party’s lifeboat was very large and could hold millions. My particular lifeboat held but a handful so was no threat. We look out over the vast sea and see lifeboats everywhere. We see the NRA in one boat and we see flag-wavers in others, but waving different flags, from Old Glory to the green flag of Islam.

And what happens if all the lifeboats tie up and build yet another “Ship-of-State”? The same people will garner the same result. Unfortunately, in order to save America, we have to remake America, one where laws have meaning, and to break the law one must suffer the consequences (illegal immigration = DEPORT).

Our America of Yesterday is gone. When LTC Terry Lakin was marched into the history books, he took our country with him, and upon his shoulders rode the suffering and the deaths of countless Patriots who gave everything they could, everything they had, including their very lives, so that you and I could enjoy the benefits of our Constitution. It won’t be long before my voice is silenced, either by a bullet or an “accident (heart failure vis-a-vis Breitbart?), or when the dissent of the United Nations, Islam and ineligibility will be censored and land one in jail, shades of LTC Terry Lakin.

[It is interesting to note that the “powers-that-be” never took Bob Dylan‘s so-called “threat” seriously during the 1960‘s. The Pentagon got what it wanted: the M-16 and a chance to perfect the cavalry tactics of the helicopter.]

The demolition will never stop. Attacks on each and every lifeboat will and have ensued. The Left is gloating, believing that they’ve won a “victory” over honesty and integrity, but it is the virtues of the Bible which are everlasting, and a person’s worth is only as much as he or she is willing to sacrifice himself for the greater good. That there is no honor in sloth or deceiving is but a lesson the Left has yet to learn.

[The philosophy of the Left is one of hypocrisy: you must respect me, but I may choose not to respect you.]

Yes, Hitler’s “Blueprint of Conquest” is but “The Fine Art of Demolition” being practiced, daily, in the White House. The apocalypse has yet to be painted, but when it is, there will be no shortage of the color red.